As Hadar Sela noted in her recent reports on the upcoming ‘Global March to Jerusalem’, scheduled for March 30, 2012:

The organisers are a conglomerate of people representing the ‘red-green alliance’ the world over. Radical Leftists, Muslim Brotherhood-connected Islamists, [antisemites] and representatives of and sympathisers with the Iranian regime have once more come together with the aim of engineering an event which will…advance their long-term assault on the legitimacy of the Jewish state.

So, it wasn’t surprising when I read, at Anti-Defamation Leagues’s site devoted towards exposing extremists, that an antisemite as prolific as Gilad Atzmon will be speaking in Oakland, California, on February 25, at a “benefit for the Global March to Jerusalem – North America.”

Here’s the flyer promoting the event. 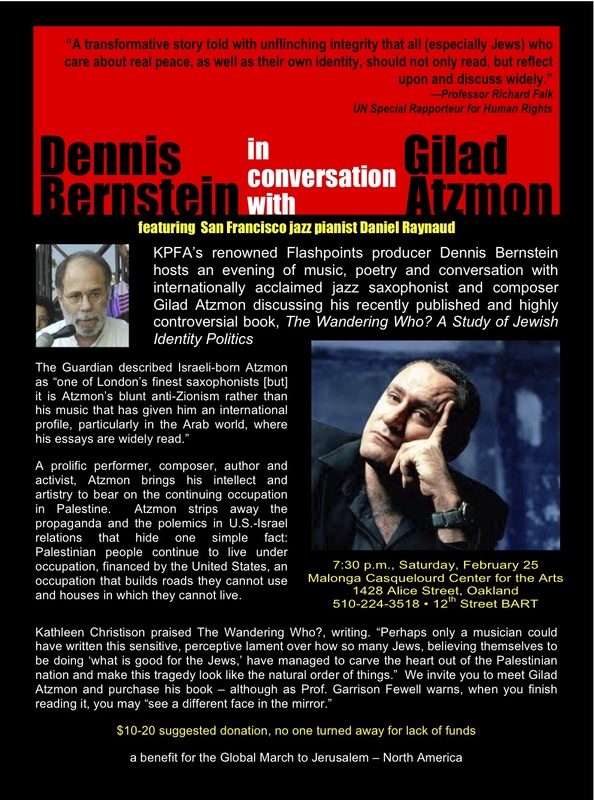 As we’ve noted repeatedly, Atzmon’s musings on the threat to humanity posed by Jews is literally indistinguishable from what you’d find at websites of white supremacists, and so his common cause with Islamists and other extremists inspired by dreams of the Jewish state’s demise represents quite an intuitive ideological synergy.

Finally, note the blurb from the Guardian on the flyer, which refers to this 2009 interview of the “London saxophonist” by the paper’s literary critic, John Lewis, which included this photo of the urbane, sophisticated artist. 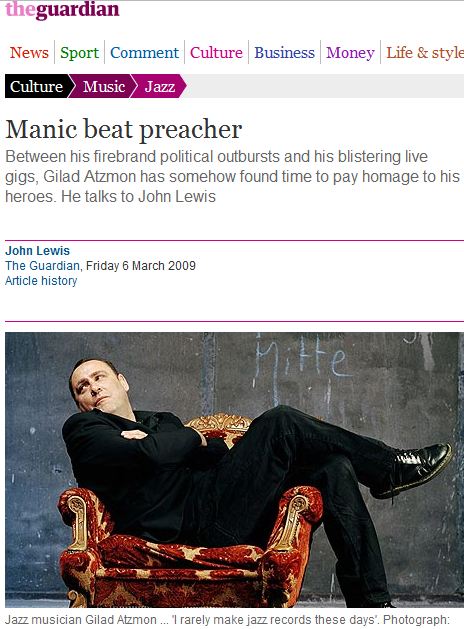 It may come as a surprise to some that Atzmon is a saxophonist at all. His career as a musician has long been drowned out by the clatter of his extra-curricular activities: the furious attacks on Israel (he writes and edits for the website Palestine Think Tank); the philosophical texts on Jewish identity that get discussed by the likes of Noam Chomsky; the two comic novels that have been translated into 24 languages.

Just to be clear, Atzmon’s extreme antisemitic musings predated Lewis’ 2009 praise of Atzmon by many years.  Here’s a quote from Atzmon’s website, posted in 2003.

American Jewry makes any debate on whether the ‘Protocols of the elder of Zion’ are an authentic document or rather a forgery irrelevant. American Jews (in fact Zionists) do control the world.. So far they are doing pretty well for themselves at least.

The problem with Atzmon, wrote Lewis, later in his piece, is “that trenchant politics often sit uneasily alongside music, particularly when that music is instrumental.”

Like Loading...
Tags from the story
Anti-Zionism, Antisemitism, Delegitimization, Gilad Atzmon, Global March to Jerusalem, Guardian, Jewish Conspiracy, John Lewis, Uncategorized
Written By
Adam Levick
More from Adam Levick
Once again, the Indy fails to include information that would undercut their...
Read More