We all know the story well but few of us, I suspect, know the name.

It is 1847 and we are in the obstetrics section of a Viennese hospital, and it’s one of the most dangerous places in the world. Only the destitute, the homeless, the husband-less are sent there; any woman who can afford to is delivered at home. The mortality rate in the hospital for mothers and babies from puerperal (“child-bed”) fever, a form of blood-poisoning, hovers around 30%.

Enter a young Hungarian doctor, freshly graduated and horrified at what he sees. Unlike so many of his illustrious seniors he does not despise the patients and is determined to discover the cause of this daily hecatomb. He begins to observe and keep records. His name is Ignaz Semmelweis. 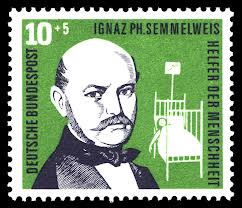 He soon remarked that, among women in the first ward of the clinic, the death rate from childbed fever was two or three times as high as among those in the second ward, even though the two wards were identical with the exception that medical students were taught in the first and midwives in the second. He put forward the thesis that perhaps the students carried something to the patients they examined during labour. The death of a friend from a wound infection incurred during the examination of a woman who died of puerperal infection gave support to his reasoning. He concluded that students who came directly from the dissecting room to the maternity ward carried the infection from mothers who had died of the disease to healthy mothers. He ordered the students to wash their hands in a solution of chlorinated lime before examining patients.

Under these procedures, the mortality rates in the first ward dropped from 18.27 to 1.27 percent, and in March and August of 1848 no woman died in childbirth in his division.

The students accepted Semmelweis’s thesis with great enthusiasm, but his superiors resisted because they could not and would not understand. This was, after all, before the germ theory of disease had been formulated and infection was felt to be carried by “bad air” (“miasma”) or, in the case of so many fallen women, it was a judgement from God. And the idea that infection could possibly be carried by doctors, the closest thing to gods themselves, was simply unthinkable. Semmelweis came under suspicion as a trouble-maker and those suspicions were confirmed when he threw in his lot with the radicals during the Vienna Spring of 1848. A Jew to boot, he was no longer welcome in Vienna.

But it was Semmelweis who won. He transferred to Pest and there too he decimated the incidence of puerperal fever, whilst in Vienna they continued to poison their women and babies. His ideas gradually spread and when John Snow in England demolished the miasma theory of infection and the germ theory began to take hold, Semmelweis was vindicated. His influence on the development of knowledge and control of infection was hailed by Joseph Lister, the father of modern antisepsis: “I think with the greatest admiration [and joy] of him and his achievement.”

He could have had an easier and decidedly wealthier life but, thanks to his humanity, his dedication, his insight, his sheer pig-headed unselfish persistence, Dr Ignaz Semmelweis was truly a Jew who made a difference.

It isn’t individual bravery that wins wars, though it’s certainly a necessary quality. It’s brains that win modern wars and not the brains of generals, though these can certainly lose them. No, it’s the brains of the men and women in the white lab-coats, the scientists and technologists.

It’s 1916 and the British government is deeply worried. The country’s munitions industry is running short of acetone, a vital component of cordite, the explosive in the War’s most decisive weapon, the artillery shell. Unless an inexpensive source of acetone is found and found quickly, the War will inevitably be lost and the economy ruined.

Chaim Weizmann is a Russian émigré and Jewish biochemist, working at the University of Manchester. He’s a brain in a white lab coat who finds a way of producing acetone from simple starch, potatoes to you and me. The rest – as it always is – was history. The British Army survived and then thrived, pounding German dreams of European domination to defeat with Weizmann’s acetone. Weizmann himself used his influence to persuade a grateful government to adopt the Balfour agreement and, even though Israel was in the event short-changed, it was enough to earn Weizmann the first Presidency of the fledgling Jewish State.

There are two lessons to be learned.

Number one, hang on to your Jews. Those states which have expelled their Jewish populations live to pay a heavy price. Sixteenth Century Spain and Portugal found themselves deprived of the benefit of Jewish commercial experience and, despite massive initial advantages, were overtaken and overshadowed by tiny Holland and then England, who had taken in many of their Jews. Hitler’s folly in exterminating his Jewish brains and driving others into the welcoming arms of the Allies needs no comment. Is the Arab world better off, scientifically, culturally, educationally for the brutal expulsion of so many of its Jewish communities after 1948?

The second lesson is for Israel’s enemies. Israel lacks the countless legions of Egypt, the big battalions of Iran. It has no steady flood of petrodollars. But what it does have is an endless supply of brains in white lab coats. And tremble before the Jews in the white lab-coats. Because it is they who make the difference.

Everyone has heard of the great Jewish philanthropists, the Guggenheim family and the Rothschilds, but donating for good works seems to be something of an obsession for Jews who’ve “made their pile”; there are too many to name. One of my personal favourites amongst the lesser known is James Loeb who, apart from setting up an eminent music school and donating his art collections for public display at Harvard and Munich, found time to endow the Loeb Library of classical literature, opening the ancient world to a mass audience at affordable prices. No-one who ever read one can forget the elegance of a Loeb volume.