What follows is a first hand account by our good friend Harvey of the racism, lies and abuse hurled at innocent theatre-goers by the Palestine Solidarity Campaign when Israel’s Batsheva dance group performed last Thursday, Friday and Saturday at The Playhouse Theatre in Edinburgh. Harvey also highlighted the frightening lack of security inside the theatre.

He took footage and photos of Thursday’s anti-Israel protests before, during and after Batsheva’s performance of Hora. By Saturday, when he had been identified as a supporter of Israel, he received this volley of abuse from PSC’s Scottish Chair Mick Napier for merely standing alone and filming Napier’s protest:

“Tell him to put his camera away. It’s intimidating. We know what they do with images. They use it to torture. They put Palestinians in their dungeons. And you. You think we’re afraid? You can’t call in your dirty little IDF to torture us as you do our friends. You’re a disgusting specimen.”

Disgusting specimen, eh? Such a pleasant chap that Napier. And it’s alright for Napier to have a go at members of the public out for a pleasant Thursday night’s entertainment; just don’t intimidate poor, defenceless Napier and his flock.

And one of Napier’s flock was this equally lovely chap: 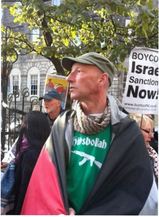 Does anyone need reminding about the exhortations of Hezbollah’s Sheikh Nasrallah who has characterised Jews as the “grandsons of pigs and apes” and has said that if every Jew gathered in Israel it would save Hezbollah the effort of going after them worldwide. And go after them worldwide they have with terrorist attacks in Argentina in 1992 and 1994 and this year in Bulgaria.

Here is Harvey’s footage of PSC activists taunting the theatre-goers before Thursday’s performance with cries of “Your tickets are covered in Palestinian blood”:

Harvey reports that on entering The Playhouse the security, which consisted of a trestle table for checking bags, was “optional”. He walked in on the Thursday night without even showing his ticket, something which the PSC got wind of allowing them to run amok during the Saturday night performance and force some nine stoppages of the show.

On the Thursday, Harvey reports, there were three stoppages. Each time the Batsheva dancers came into a line at the front of the stage and stood like soldiers to attention while the lights went up to allow security to evict the PSC activists. And each time the audience responded with a spontaneous standing ovation to drown out the noise of the activists.

At the end of the performance the dancers received a proper standing ovation:

But on leaving the theatre the audience were once again confronted with crazed calls for the destruction of Israel:

It is incredible that after the disruptions during the Israeli Philharmonic Orchestra’s performance at the Royal Albert Hall and Habima’s Merchant of Venice at The Globe there have been no prosecutions for aggravated trespass.

But this will always be the case without complaints by the likes of the Royal Albert Hall, The Globe and The Edinburgh Playhouse to the police.

Please come and support the wonderful dancers and help drown out the noise of the PSC’s professional disruptors.

Here Napier says that if Batsheva “breaks their links with the state of Israel, then they may be welcome as normal citizens, but not as agents for the Israeli state.” Of course, that is impossible as Batsheva would not be able to operate without state funding, just like any other dance group. Yet another example of holding Jews to a higher standard:

And here is another anti-Israel activist explaining to the mob that the problem is simply with Batsheva’s state funding. Would he demand the arts in the UK go without state funding for the invasions of Afghanistan and Iraq? I think not:

In this footage an activist claims that some theatre-goers are destroying their Batsheva tickets. There is no proof. It’s just in his mind:

Finally, here is footage of a choir pleasantly singing for Israel’s security wall to come down. One woman even sings “inshallah”. Jewish babies having their throats slit by Hamas is obviously not a concern for some small-minded people: