According to the BBC’s Editorial Guidelines:

Material supplied by third parties needs to be treated with appropriate caution, taking account of the reputation of the source.

We should only broadcast material from third parties who may have a personal or professional interest in its subject matter if there is a clear editorial justification.  The material should be labelled.  This includes material from the emergency services, charities, and environmental groups.”

Amnesty International long since ceased even trying to pretend to appear objective on the subject of Israel. Its London premises regularly host some of the more extremist anti—Israel campaigners.

Despite that, and despite the clear guidelines quoted above, a November 6th report on the BBC News website is actually little more than a slightly re-hashed version of an Amnesty International press release on the subject of 44 year-old Bassem Mohamed Abed Alrahman Tamimi from Nabi Saleh who, having violated the terms of two suspended sentences pending against him since April 2012, was recently sentenced to a term in prison. 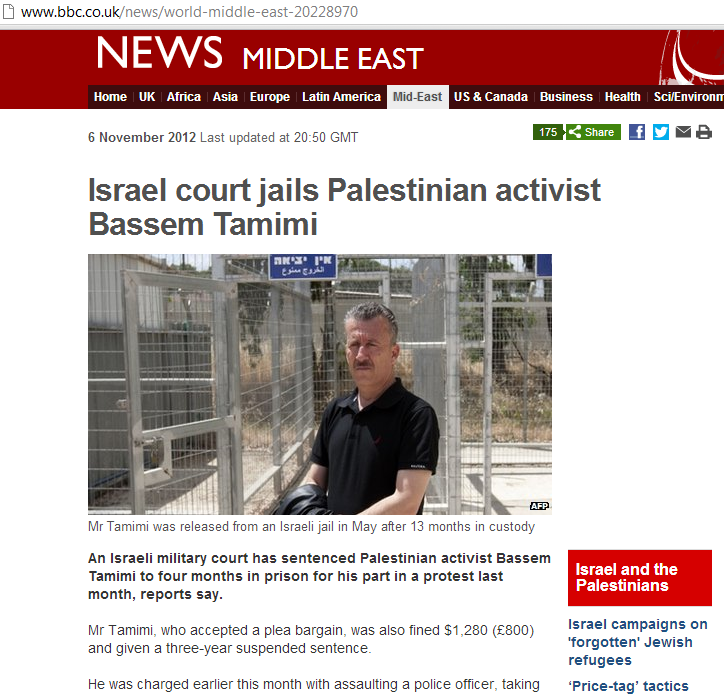 Tamimi is the coordinator of the Nabi Saleh branch of the Popular Struggle Coordination Committee which, among other things, organizes the weekly violent demonstrations in that village. On October 24th 2012, he was one of a group of Palestinians, anarchists and some 20 foreign activists from the International Solidarity Movement who staged an unauthorized demonstration at the Rami Levy supermarket in Sha’ar Binyamin.

“It said he [Tamimi] had been held solely for peacefully expressing his rights to freedom of expression of assembly when he attended a non-violent protest on 24 October at an Israeli-owned supermarket near Shaar Benjamin against the encroachment of settlers onto Palestinian land.”

The supermarket in question is actually a model of co-existence and exemplifies the kind of relations of which those of us in the region – Jews and Arabs alike – who aspire to peace would like to see more. Sixty of the 134 employees at the supermarket are Palestinian. Jews and Arabs work and shop there (and elsewhere) side by side every day.

But in recent months, the Rami Levy supermarket has come under fire from those in the Boycott, Divestment and Sanctions movement who are not happy at seeing this sort of coexistence and normalization of relations between Arabs and Jews. Among those nay-sayers are the Popular Struggle Coordination Committee activists and their foreign friends.

“Abir Kopti, an activist with the Palestinian popular committees, told Ynet that Wednesday’s protest was part of a line of steps recently taken. The first was last week’s blocking of route 443.

According to Kopti, the activists are planning additional protests in the future. “This time we chose the Rami Levy store because we want to send a message to boycott the occupation and its products. As long as the Palestinians get no justice, settlers and Israelis will not lead normal lives.”

She added that the protest was also meant to send a message to the Palestinian people not to shop in Rami Levy. It should be noted that the retail chain has two branches in the West Bank that also serve Palestinians.”

Kopti (who is herself from Nazareth, incidentally, and is a professional activist with several organisations) is the spokesperson for the PSCC. On the day of the demonstration she Tweeted the following:

So as we see, by their own admittance the organisers of the unauthorized demonstration were not – as claimed by Amnesty International  and cited by the BBC– protesting “against the encroachment of settlers onto Palestinian land”. Rather, they were engaged in harassing and intimidating shoppers and staff in order to promote the BDS agenda. Here is some footage from the inside of the store.

But it is not only the text of this article which demonstrates how the BBC has allowed itself to be co-opted for political purposes by anti-Israel campaigners. Take a look at the second photograph chosen by the BBC to illustrate the article. 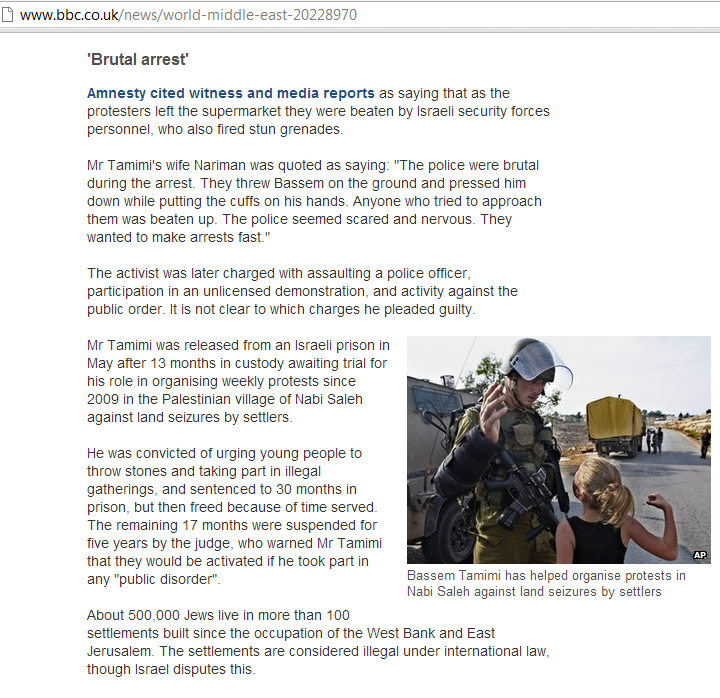 The picture was taken by AP photographer Majdi Mohammed on November 2nd at Nabi Saleh. Obviously, the contrast between the big, fully equipped and armed Israeli soldier and the small, helpless and sweet blonde Palestinian girl is designed to send a very clear symbolic message.

Now take a look at this video footage shot on the same day:

The little girl in question is named A’hd Tamimi and she is the daughter of Bassem Tamimi and his wife, Nariman who films for B’Tselem’s video project.

Tamar Sternthal of CAMERA wrote about the cynical exploitation of eleven year-old Miss Tamimi by her parents for the creation of anti-Israel propaganda in the Times of Israel two months ago. According to a recent article in the Algemeiner:

“A senior IDF source told Ynet that intelligence indicates that pro-Palestinian activists pay Palestinian children from Nabi Salih and other nearby villages to confront the soldiers. “The soldiers are briefed on the fact that these protests are staged for the sake of provocation, so that they could be filmed acting violently and so that those videos could be distributed worldwide in an effort to harm the IDF’s image,” the officer said.”

By way of the Nabi Saleh solidarity website we learn that A’hd and her cousin Marah – who also features prominently in propaganda photos and videos – even received recognition from the PA President for her “bravery”.

The BBC Editorial Guidelines claim that:

“We must always safeguard the welfare of the children and young people who contribute to our content, wherever in the world we operate.

The Ofcom Broadcasting Code obliges broadcasters to take “Due care … over the physical and emotional welfare and the dignity of people under eighteen who take part or are otherwise involved in programmes.”  This obligation is irrespective of any consent that might have been given by a parent or other adult acting in loco parentis. “

It is therefore difficult to see how the BBC can justify the use of a photograph of a minor deliberately and repeatedly placed in danger by her parents in order to try to score a cheap publicity stunt for propaganda purposes.

No less puzzling is the BBC’s decision to unquestioningly and partially promote the anti-Israel, anti-peace and co-existence agenda of Bassem Tamimi and his champions at Amnesty International, not least due to the fact that the lack of scruples in promoting that agenda is exemplified by the serial exploitation of children.