It is said that a picture is worth a thousand words, so let’s take a look at some of the visuals the BBC is using to illustrate its news reports on Operation Pillar of Cloud.

This report by James Kelly for BBC News on November 16th 2012 is one minute and forty one seconds long. 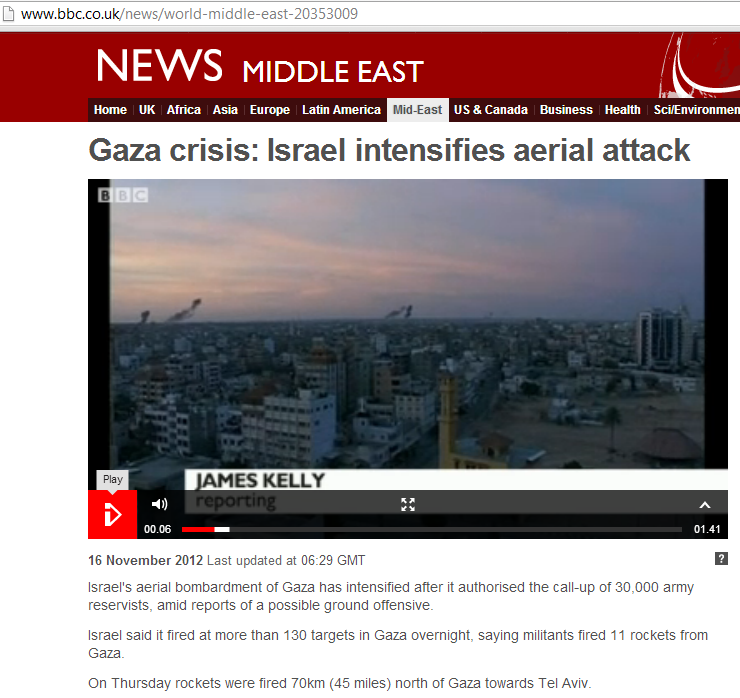 The report displays an obvious contrast in the language chosen to describe events in different locations. Whilst in Tel Aviv “militants targeted the city with rockets”, in the Gaza Strip, according to Kelly, “Israeli missiles [are] repeatedly striking” and “Israel pounded Gaza” – the latter statement clearly not reflecting the reality of the precision of Israeli strikes against targets which are exclusively linked to terrorism.

The first 21 seconds of the report show images from Gaza. The report then cuts to two press conferences – one given by Israeli PM Binyamin Netanyahu (25 seconds) and the other by Hamas leader Ismail Haniyeh (59 seconds). The visuals then return to Gaza for another 8 seconds before cutting to Tel Aviv for six seconds. The report ends with a straight eighteen seconds of more images from the Gaza Strip.

Clearly that cannot be said to provide audiences with an accurate and balanced view (literally) of events.

0 replies on “BBC balance in pictures”