Last month the BBC Jerusalem Bureau’s Kevin Connolly tried to persuade his audience that Israeli Arabs were likely to show a low turnout in the country’s elections. He was wrong: the average turnout in that sector was 56%, with some cities, towns and villages showing even more impressive rates. 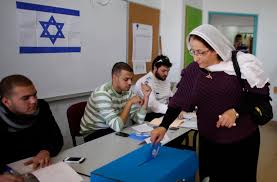 “Kafr Kasim, near Rosh Ha’ayin, led the Arab sector with close to 80% turnout, according to the Central Elections Committee.

But what was really interesting about Connolly’s article was the way in which it stereotypically herded over 20% of the population of Israel into one homogeneous lump.

Connolly interviewed one Mohammed Darweshe in Nazareth. He did not reveal Mr Darweshe’s affiliations beyond the vague description of “community leader”, but his interviewee may perhaps be the co-executive director of the Abraham Fund Initiatives which has been involved in campaigning to encourage voters in the Arab sector to use their civil rights. Whether or not that is the case, it would certainly have been appropriate – in the interests of accuracy and impartiality – for Connolly to inform his readers about the variety of factors affecting electoral participation in the Israeli Arab sector, as outlined in some of that organisation’s literature, with one of those factors being the influence of groups such as  ‘Abnaa al-Balad’ and the Hamas-affiliated Northern Islamic Movement (headed by Raed Salah) which reject any participation in the electoral process in Israel.

Connolly’s next interviewee was Ibrahim Sarsour, who is not only the head of the United Arab List as described in the article, but also the leader of the Southern Islamic Movement which differs from its Northern counterpart in the fact that it does take part in the political process in Israel. Oddly, Connolly apparently did not think to ask Mr Sarsour if the fact that his party has never had a woman on its list might perhaps hinder its appeal to voters.

Throughout his entire article, Connolly ignored the political concerns of Christian Arabs, non-Arab Muslims, Bedouin and Druze, instead promoting the

erroneous notion of a homogeneous Israeli Arab sector and disregarding the fact that for members of those groups – as well as many Muslim Israeli Arabs – priorities when deciding who to vote for might extend beyond the limited subject of “peace talks”.

“But it is obvious that Israeli-Arabs could wield a great deal more influence if they voted tactically and voted in larger numbers.

By voting for their own small parties they tend to ensure that in the kaleidoscope of Israeli politics they remain without real influence.

That influence would be felt very directly indeed if a very large number of Israeli Arabs were to vote for Meretz or any of the other parties that supports peace talks with the Palestinians.”

In stark contrast to Connolly’s article, however, the election results show the diversity of Israeli Arab opinion and perhaps also reflect the fact that in a 2012 poll, 52.8% of Israeli Arabs defined themselves as proud to be Israeli.

Israelis – whatever their ethnic or religious background – obviously cannot be pigeon-holed into stereotypical categories. It is a pity 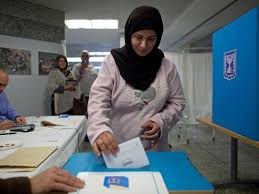 that Kevin Connolly denied his audiences any real insight into Israeli society by trying so hard in this article to do just that, in order to promote his own pre-decided narrative about Israel.

One of Connolly’s opening ‘explanations’ for his predicted low voter turn-out was as follows:

“Things used to be very different.

In the first elections in Israeli history Arab parties ran as affiliates of the Mapai movement which was led by David Ben-Gurion, the architect of the state.

Parties like The Democratic List of Nazareth may not have been very big but they were included in governing coalitions and they reflected the impulse of the left-wing founders of the new state that the Arab minority had to be included in the political process.

Israel has changed a great deal since those days.

Its current leadership emphasises that it is a Jewish state; Benjamin Netanyahu would want the Palestinian leader Mahmoud Abbas to recognise it as such in any future negotiations. A law passed in the last parliament requires non-Jews who want to migrate here to swear an oath acknowledging its Jewish nature.

That kind of talk makes the 20 per cent or so of the population which is Arab feel uneasy, or even angry.”

Poor Ben Gurion must be spinning in his grave at the suggestion that the concept of Israel as a Jewish State is a product of the 21st century. After all, from its very first day, Israel was defined as such.

“Accordingly we, the members of the people’s council, representatives of the Jewish community of Eretz-Israel and of the Zionist movement, are here assembled on the day of the termination of the British mandate over Eretz-Israel and, by virtue of our natural and historic right and on the strength of the resolution of the united nations general assembly, hereby declare the establishment of a Jewish state in Eretz-Israel, to be known as the state of Israel.”

Beyond his obviously patchy knowledge of history, Connolly clearly has no understanding of the relevance of the insistence upon the recognition of Israel as the Jewish state by presumed peace partners who not infrequently tout the subject of the ‘right of return’ of millions of descendants of Palestinian refugees to Israel – with the inevitable resulting demise of Jewish self-determination.

But clearly, what Connolly was trying to do in this article was to suggest that since the decline of the old, socialist-ruled Israel (the one which European Left-wingers could stomach) and the subsequent development of a more varied political spectrum, Israel has become more discriminatory towards its minorities and that leads to low participation in the electoral process.

In order to further promote that idea, he stated that non-Jews wishing to “migrate” to Israel (i.e. receive Israeli citizenship) are required by law to “swear an oath acknowledging its Jewish nature” and that the law concerned was passed in the 18th Knesset.

Connolly does not provide a source for that assertion, but if he can find that clause in the Law of Citizenship or on the list of laws passed by the 18th Knesset, his point is at least open to discussion. If he cannot, then not only must the BBC issue a prominent correction to this article, but a full apology is also in order.

Like Loading...
Tags from the story
BBC, BBC Jerusalem Bureau, BBC News, BBC Online, Elections 2013, Kevin Connolly, Uncategorized
Written By
Hadar Sela
More from Hadar Sela
Yet another programme about Balfour Declaration will be aired this week on...
Read More