Here is an article from February 4th interviewing two British-born Jews who immigrated to Israel, which – interestingly – did not appear on the Middle East page of the BBC News website, but in its UK section. 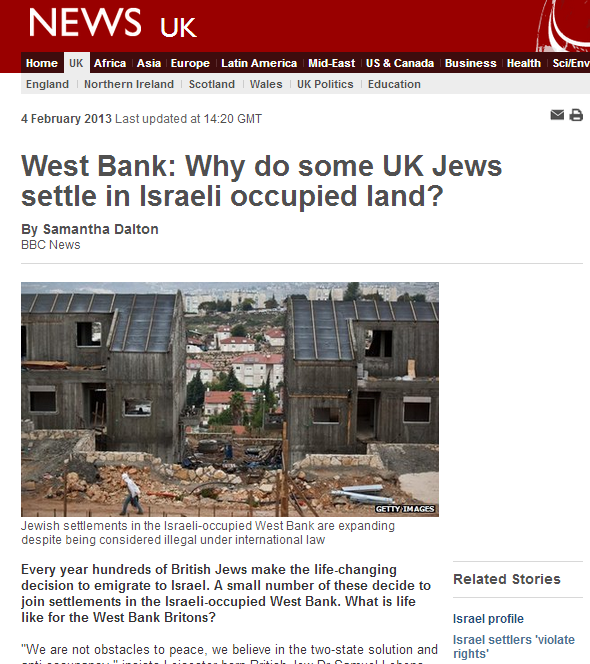 The article’s author, Samantha Dalton, does not appear to be a Middle East expert by any stretch of the imagination and so it is interesting to note the obviously pro forma passages in the article which are clearly included in order to meet BBC editorial requirements.

“Israel occupied the West Bank and east Jerusalem in the 1967 Middle East War. To Israelis and religious Jews, the West Bank is known by its Biblical name of Judea and Samaria.”

No background is given on the subject of the Six Day War and it is not made clear that the area was part of the original land designated by the League of Nations as the homeland for the Jewish people or that it was conquered and occupied by Jordan for 19 years before the 1967 war. Neither is it made clear that the term “West Bank” was coined by the Jordanian occupier in 1949 or that the area’s original names were in general use until then, appearing, inter alia, in British Mandate and United Nations documents. 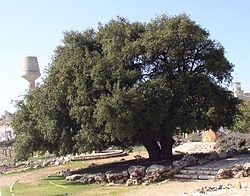 “Successive Israeli governments have built settlements there since 1968, for both strategic and ideological reasons.

Many settlers regard living there as fulfilling God’s will, based on God’s promise in the Bible to give the land to the Jewish people. Currently about 500,000 Jews live in more than 100 settlements.”

Whist some people living in Judea & Samaria may certainly hold such views, the fact that there are also many other residents who do not is not reflected in this article, thus creating a misrepresentative impression. Both the interviewees selected to represent “West Bank Britons” are described in detail as observant Jews and the tone of the article as a whole clearly implies linkage between religious belief and location.

“Settlements are considered illegal under international law, though Israel disputes this.”

This standard BBC insertion fails to reflect the variety of legal opinion on the subject and presents a distorted picture according to which Israel is alone in its view of the subject. The roots of this often repeated BBC mantra can be found in its own interpretation of what it titles “the Geneva Convention”. According to that particular interpretation:

“It is widely accepted that under international law, the Jewish settlements in the territories occupied by Israel in 1967 are illegal.

Article 49 of the Fourth Geneva Convention relative to the protection of civilian persons in time of war states: “The occupying power shall not deport or transfer parts of its own population into the territories it occupies.” “

Neither in that obviously partial BBC interpretation nor in its subsequent and frequent use in numerous articles and reports is any recognition given to the fact that there are other opinions on the subject. For example:

“Professor Julius Stone, a leading authority on the Law of Nations, categorically rejected the use of the term “occupied territory” to describe the territories controlled by Israel on the following counts:

(1) Article 49 relates to the invasion of sovereign states and is inapplicable because the West Bank did not and does not belong to any other state.

(2) The drafting history of Article 49 [Protection of Civilian Persons in Time of War] – that is, preventing “genocidal objectives” must be taken into account. Those conditions do not exist in Israel’s case.

(3) Settlement of Jews in the West Bank is voluntary and does not displace local inhabitants. Moreover, Stone asserted: that “no serious dilution (much less extinction) of native populations” [exists]; rather “a dramatic improvement in the economic situation of the [local Palestinian] inhabitants since 1967 [has occurred].” “

The article goes on to state that:

“Peace talks between Israel and the Palestinians have broken down over the issue of settlements. Palestinians demand a full Israeli withdrawal from the West Bank and East Jerusalem, which they want for a future state.”

This subjective account fails to make clear to readers that under the terms of the Oslo Accords, the subjects of Jerusalem, borders and

settlements were to be discussed in final status negotiations and that it is the Palestinian Authority’s failure to engage in those negotiations by continually presenting preconditions – even when those preconditions were humoured, as was the case with the 2010 ten-month building freeze –  which has caused a break-down of talks.

It is very disturbing that the BBC consistently misleads audiences by providing incomplete, inaccurate and partial information on this issue. What is perhaps most absurd about the BBC’s boilerplate insertions into any report relating to the subject of Israeli communities in Judea & Samaria is that the BBC seems determined to prove itself more hard-line on the subject than the Palestinian Authority itself. It is, of course, entirely clear to all those concerned in the peace process that, after territorial exchanges, the large blocs of communities will remain under Israeli control under the terms of any future agreement.

One of those blocs is the Gush Etzion area, where both the interviewees in this report live – one in Alon Shvut and one in Elazar. The article’s author fails to inform her readers of the fact that some 70,000 dunams of the land comprising Gush Etzion area council (and some areas in the PA-controlled Area A such as Darawshe) was purchased by Jews long before the Jordanian invasion in 1948, with the first community in the area having been established in 1927, but abandoned in 1929 due to the Arab riots. Between 1943 and 1947, four more communities were established in the area, the most well-known being Kfar Etzion, which was the site of a massacre by British financed, supplied and led Jordanian troops on the day before Israel declared independence – May 13th 1948.

Now that would be an interesting story for the BBC to investigate.