Readers may remember that last month we reported here on the subject of the Palestine Solidarity Campaign’s Tony Greenstein being allowed to take part in the BBC One programme ‘The Big Questions’ on February 3rd whilst wearing clothing and a badge displaying political slogans.


A member of the public who saw fit to complain to the BBC on that subject has kindly sent us a copy of the reply received from the BBC complaints department.

Thanks for contacting us regarding The Big Questions on 3 February.

Please accept our apologies for the delay in replying. We know our
correspondents appreciate a quick response and are sorry you’ve had to
wait on this occasion.

We understand you felt contributor Tony Greenstein appeared in this
programme while inappropriately wearing a political campaign jersey
with a political slogan and badges visible.

Tony Greenstein’s background and political stance was mentioned when
he was referred to as: “Tony Greenstein, founder of the Palestine
Solidarity Campaign…”

Although his t-shirt did contain a political slogan and badges, these
were only really visible in passing when the camera was on long shots
or panning around.

It’s important also to remember the programme is a debate programme;
Tony Greenstein was expressing his views on Israel and the
Palestinians, as were other contributors, so his clothing was another
form of expression in this regard.

His views were clearly expressed verbally, and the programme heard
many other views from other contributors.

Nevertheless, we’ve registered your comments on our audience log. This
is the internal report of audience feedback we compile daily for the
programme makers and senior management within the BBC. The audience
logs are important documents that can help shape future decisions and
they ensure that your points, and all other comments we receive, are
made available to BBC staff across the Corporation.

Thanks again for contacting us.

The BBC must surely be aware of the Palestine Solidarity Campaign’s record of support for Hamas and other terror organizations, as 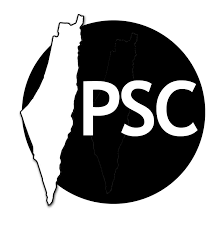 well as the controversy surrounding members of some of its various branches and Holocaust denial. It must also be aware that PSC officials have collaborated with Interpal (linked to the ‘Union of Good’ which is headed by the virulent anti-Semite and homophobe Yusuf Qaradawi) and that its director Sarah Colborne was aboard the IHH ship the Mavi Marmara in 2010 when Islamist passengers attacked the IDF soldiers boarding the ship to stop it from breaking the naval blockade intended to prevent arms running to terrorist groups in the Gaza Strip and that Colborne was active in the organization of the 2012 ‘Global March to Jerusalem’ together with members of Hamas and Hizbollah and representatives of the Iranian regime.
Despite that, the BBC continues to invite a member of the extremist PSC to take part in ‘debate’ and – we now learn – even allows him to wear apparel promoting that terror-supporting organization as “a form of expression”.
Apparently, the fact that such “expression” might be offensive to the many people around the world – not just Israelis – who have lost loved ones in terror attacks perpetrated by the very organisations with which the PSC collaborates does not concern the BBC.
As we remarked at the time:

After all, the BBC’s obligation to impartiality would suggest that if members of the PSC are invited to debates and allowed to “express”

themselves in this way, then other extremist organisations which also promote the abolition of the rights of certain groups of people on the basis of their ethnicity, colour, gender, religion or sexual orientation should surely also be granted similar access to this “form of expression”.
That, fortunately, is not going to happen, but this response from the BBC complaints department does show the depth of the corporation’s denial regarding the extremism of the PSC and the way in which intolerance which would not be countenanced by the BBC in relation to any other ethnic, religious or national group is promoted and given mainstream legitimacy by a publicly funded organization in 21st century Britain.