The BBC News website’s Middle East page on March 23rd 2013 was headed by no fewer than six items pertaining to what was described as an “Israeli apology for flotilla deaths”. 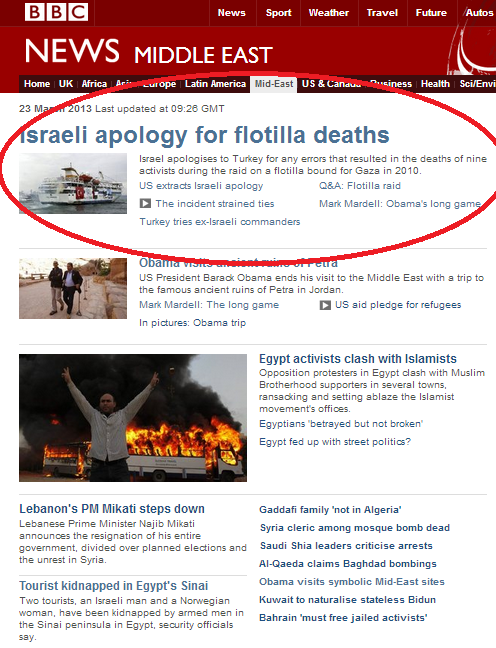 Those items include a written article entitled “Israel PM apologies for Gaza flotilla deaths” which also includes video footage and a filmed report under the same title by Wyre Davies which appeared on BBC television news. Curiously, the footage in both those reports comes with a disclaimer.

Other items include a written report by Kevin Connolly entitled “Mavi Marmara: US extracts last-minute Israeli apology”, a written article titled “Obama ends Middle East trip with visit to Petra ruins” which also features video footage by Yolande Knell and Q&A piece going under the dramatic headline “Q&A: Israeli deadly raid on aid flotilla”.
All of these reports contain a plethora of basic inaccuracies on the one hand and distinguish themselves through deliberate omissions of crucial information on the other.
The widespread assertion made in the website heading, article titles and in the reports themselves that Israel apologized “for flotilla deaths” is both inaccurate and superficial. As Professor Barry Rubin points out here, this event did not come out of the blue and as explained on PM Netanyahu’s Facebook page, the apology was for “any mistakes that might have led to the loss of life or injury”.

“He [Obama] got the Israeli Prime Minister on the phone apologizing to the Turkish Prime Minister for that deadly military raid on a Turkish ship heading to Gaza with activists on board three years ago.”

The fact that such inaccurate portrayals by Davies and Knell found their way into BBC television news reports is rendered even more egregious when one notes that the wording in the strap line of the main article appearing on the BBC News website indicates that the BBC is actually well aware of the real facts:

“Israel’s prime minister has apologised to Turkey for “any errors that could have led to loss of life” during the 2010 commando raid on an aid flotilla that tried to breach the Gaza blockade.” [emphasis added]

Another serious inaccuracy which appears across the board in these reports is the portrayal of the Mavi Maramra as a ship transporting “aid” to Gaza and the description of its passengers as “activists”. Wyre Davies says in his filmed report:

“….nine Turkish activists on a boat called the Mavi Marmara taking aid to Gaza. That boat was boarded by Israeli marines and nine of the activists were killed.”

In this article the BBC claims that:

“Nine people were killed on board the Turkish aid ship, Mavi Marmara, when it was boarded by Israeli commandos while trying to transport aid supplies to Gaza in May 2010 in spite of an Israeli naval blockade.”

The Q&A article claims that:

“It [the flotilla] wanted to deliver aid to Gaza, breaking an Israeli and Egyptian blockade on the territory. The ships were carrying 10,000 tonnes of goods, including school supplies, building materials and two large electricity generators. The activists also said they wanted to make the point that, in their view, the blockade was illegal under international law.”

The blockade is not of course “illegal under international law”, as the UN’s Palmer Report made perfectly clear.

“The fundamental principle of the freedom of navigation on the high seas is subject to only certain limited exceptions under international law. Israel faces a real threat to its security from militant groups in Gaza. The naval blockade was imposed as a legitimate security measure in order to prevent weapons from entering Gaza by sea and its implementation complied with the requirements of international law.”

The fact that three years on, the BBC is still promoting that myth – albeit whilst apparently thinking it has itself covered by ostensibly quoting someone else – and that it does not make it clear that the “activists” have no legitimate basis for their “views”, represents a clear breach of BBC Editorial Guidelines on impartiality and accuracy.
As for the BBC’s various claims pertaining to “aid”, the Mavi Marmara was of course one of seven vessels which made up the flotilla, but the only one on board which any violence took place. The flotilla’s organisers were offered in advance by Israel the opportunity to dock at Ashdod port, have any cargo inspected for weapons and illegal goods and then have it transported into Gaza. Any legitimate aid organization would have taken advantage of that offer, but the flotilla organisers refused it.
Further, beyond the personal effects of some 600 passengers aboard the Mavi Marmara – clearly a number far in excess of that required by any legitimate aid mission – no humanitarian goods were found on that specific ship or on two of the other vessels comprising the flotilla.
The “aid” which was carried by the other four ships included expired medicines, second-hand used clothing and other goods – many of which were damaged due to improper packaging. The total amount of “aid” was later packed into 34 trucks for transport into Gaza (although Hamas refused to accept it initially). During the same week, 484 trucks of genuine aid passed into the Gaza Strip via the crossings on the border with Israel.
As for the “activists” (as the BBC euphemistically terms them), we can get a good idea of the kind of received wisdom which lies behind the use of that phrasing by looking at the section under the sub-heading “Who organised it?” of the Q&A article.

“A group called The Free Gaza Movement, an umbrella organisation for activists from numerous countries, and a Turkish group called the Foundation for Human Rights and Freedoms and Humanitarian Aid (IHH).

The Israeli government says the IHH is closely linked to the Palestinian Islamist movement Hamas, which it views as a terrorist group, and is a member of another organisation, the Union of the Good, which supports suicide bombings. However, the Turkish government regards the IHH as a legitimate charity, and had urged Israel to let the flotilla through.”

The BBC’s anodyne description of the ‘Free Gaza Movement’ is nothing less than scandalous. It completely ignores the FGM’s connections to the International Solidarity Movement and the close links of both those groups to the terrorist organisation Hamas. It fails to mention the FGM’s dismal record of support for terror and antisemitism and its documented strategy of organizing flotillas as a PR exercise, as well as the involvement of many of its members and supporters in other anti-Israel campaigns.

No better is the BBC’s whitewashing of the IHH. As we see above, according to the BBC it is “the Israeli government” – and it alone – which “says” that the IHH is “closely linked” to Hamas. It is also the Israeli government which “views” Hamas as a “terrorist group”.
This warped version of reality ignores the fact that many other countries define Hamas as a terrorist organization besides Israel. It also downplays the nature of the ‘Union of Good’ – of which the IHH is a member – by describing it vaguely as an organization “which supports suicide bombings”. The Muslim Brotherhood’s ‘Union of Good‘ – headed by the antisemitic preacher Yusuf Qaradawi – which came into existence at the beginning of the Second Intifada as a way of raising and channelling funds to enable terror attacks by Hamas and its affiliates against Israeli civilians. It is designated by the US government as well as Israel.
The BBC’s simplistic making do with the statement that the IHH is a “legitimate charity” in the eyes of the current Turkish government  does not even attempt to explain to readers the close ties between the two and the extent of the support provided by the Turkish government in the organization of the flotilla.
All these BBC reports totally ignore the clear evidence of incitement to and preparations for violence on board the Mavi Marmara well  in advance of any meeting with the IDF, as shown for example in an Al Jazeera report aired two days before the incident.

Almost three years after the Mavi Marmara incident, the BBC’s reporting on the subject reads like a press release of which the ‘Free Gaza Movement’ itself would be proud. The blatant omission of crucial information concerning the flotilla’s organisers and participants, as well as of the circumstances of the incident itself, can only be regarded as an attempt to dictate a very specific, dumbed-down narrative about the event to BBC audiences in order to shape perceptions. That clearly compromises the BBC’s obligations to both accuracy and impartiality – as well as insulting audiences’ intelligence.