On March 25th the BBC published an article on the Middle East page of its website entitled “Israel to resume transfer of PA tax revenue“.

The word “resume” is defined as meaning “to begin or take up again after interruption” and so its use in this BBC headline would naturally suggest to reasonable readers that there had been a break in the monthly transfers of tax revenues collected by Israel to the Palestinian Authority. The question is therefore; is that choice of wording an accurate representation of the situation?
At the beginning of December 2012, the former Israeli Minister of Finance announced that he would not transfer to the PA the sum of 460 million shekels due in tax and customs revenues which Israel collects on behalf of the PA under the terms of the 1994 Paris Protocol – the chapter of the Oslo Accords dealing with financial affairs. Although members of the press – both domestic and foreign – were quick to label that announcement as being ‘punishment’ for the PA’s breach of the Oslo Accords in the form of its bid for UN observer status, that factor was not mentioned by Minister Steinitz. At the time, the Palestinian Authority was in arrears to the tune of some 800 million shekels to various Israeli bodies, including the Israeli Electric Corporation, to which it owed the vast majority of that sum for electricity already consumed in PA-controlled areas and the Gaza Strip.
In January 2013 Israel transferred the sum of $100 million from the December 2012 revenues to the PA – as the BBC itself notes in the above report. In February 2013 the revenues for January and February were transferred to the PA.
Hence, any ‘break’ in revenue transfers would be more accurately described as a delay at most, including the sum intended to be used to pay off part of the PA’s considerable debt to the Israeli Electric Corporation.
What the BBC neglects to tell its audiences in this article is that the American pressure applied upon Israel to come up with a ‘goodwill gesture’ in the form of the transfer of  revenue arrears to the PA includes that sum set aside last December, meaning that the Palestinian debt to the IEC currently stands at 730 million shekels. Negotiations with the PA to come to an arrangement on payment of the arrears have failed to yield results and the IEC now apparently considers that it has little hope of recovering that debt.  Reportedly, the IEC now seeks to make up that serious shortfall in income by requesting permission from the electricity ombudsman for an increase of some 3% on the tariffs paid by Israeli consumers.
But of course the story of the possibility of Israelis paying for their neighbours’ electricity is not one we are likely to see reported by the BBC.
Another notable feature of this report is the picture selected by the BBC to illustrate it – together with its caption. 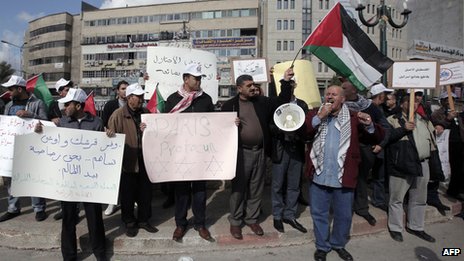 The caption reads: “Palestinians have been protesting over the economic relationship with Israel”. However, the same photograph was used by the UAE’s ‘The National’ on December 18th 2012, where it was captioned as follows: [emphasis added]

“Palestinians demonstrate against the Paris Protocol and the Oslo Agreement, both key accords which govern economic ties between Palestinians and Israelis, and ask for the boycott of Israeli products in Nablus in the occupied West Bank on Sunday. Jaafar Ashtiyeh / AFP”

That, of course, reflects the fact that the subject of economic arrangements between Israel and the Palestinian Authority, as well as the PA’s economic situation as a whole, is not infrequently used for both domestic and foreign political purposes.
Interestingly, the BBC appears to be keen to promote the long employed PA narrative of its proverbial impending economic collapse being exclusively due to Israeli actions, despite the lack of fact-based evidence for such claims and the existence of other factors such as recurrent donor shortfalls.
Concurrently, the BBC meticulously avoids informing its audiences of instances of the Palestinian Authority’s dubious financial management – for example its practice of spending over 6% of its budget on paying salaries to imprisoned terrorists and the families of suicide bombers or the recent universal electricity bill amnesty.
Telling half a story is not compliant with the BBC’s obligations to accuracy and impartiality.