An article appearing in the Middle East section of the BBC News website on March 26th – entitled “Qatar proposes $1bn fund for Palestinians in Jerusalem” – is notable for its particularly blatant one-sided adoption and promotion of a specific narrative on the subject of Jerusalem, with no attempt whatsoever made to balance that narrative with factual information.

The report opens with a loaded picture of the anti-terrorist barrier, captioned “Israeli policies have restricted the development of Palestinian communities”. No proof whatsoever is offered to back up that sweeping assertion and no context is given as to why that barrier had to be built.

“The emir of Qatar has called for the establishment of a $1bn (£660m) fund to help Palestinians in East Jerusalem, and offered to contribute $250m. 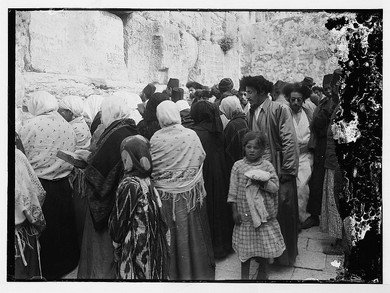 Amazingly, the BBC sees no need to balance that statement by reminding its readers of the historic ties of the Jewish people to the city, stretching back thousands of years to the time when in was the capital of the Kingdom of Yehuda or of the fact that in more modern times, Jerusalem has maintained a Jewish majority for at least the last century and a half.

The BBC report goes on:

The Palestinians want East Jerusalem as the capital of a Palestinian state, whereas Israel sees the city as its undivided capital.”

Once again we see the BBC adopting a narrative whereby Middle East history begins in 1967. That narrative of course completely ignores the Jordanian conquest of part of the city and its subsequent division for the first time in its long history, as well as the fact that the Jordanian occupation was never recognized as legitimate by the UN. The same narrative also ignores the expulsion of Jews from Jerusalem neighbourhoods during the waves of Arab violence in the riots of the 1920s and 1930s, as well as during the 1948 Jordanian invasion.

“Israel’s occupation of East Jerusalem is considered illegal under international law, and its formal annexation of the area in 1980 was rejected by the UN Security Council.

Despite this, the Israeli authorities have pursued policies which have encouraged the construction and expansion of Jewish settlements.”

The reference to neighbourhoods of Jerusalem as “settlements” (and – in the previous paragraph – to almost half the Jewish residents of the city as “settlers”) is another example of the adoption of the Arab/Palestinian narrative by the BBC, as is the presentation of the city’s unification as “occupation…illegal under international law” without the equal representation of any conflicting legal opinions. The BBC’s presentation of “East Jerusalem” as a political rather than geographical entity is also evidence of its embracing of a specific narrative and is especially egregious when one considers that the BBC does nothing to explain to its audiences what that erroneous terminology actually means on the ground.

Next, readers are spoon-fed another portion of the narrative as they are told that:

“Palestinians complain their residency status and access to basic services have been affected, along with their ability to develop communities.”

Unquestioningly repeating this unsourced hearsay from anonymous Palestinians, the BBC makes no attempt whatsoever to provide evidence of the veracity of these claims or the extent to which they reflect opinions in general – a point which is particularly relevant seeing as they contradict more tangible evidence available. That is also the case in the next paragraph, in which once again the BBC blindly reproduces politically motivated hearsay.

“Palestinian, Arab and Islamic rights in Jerusalem cannot be compromised. Israel must realise this fact,” he said.

“I propose that this summit, in a move that reflects it is serious about defending the Arab character of Jerusalem and in a bid to save whatever can be saved, establishes a $1 billion fund,” he added. “Qatar will contribute $250 million to the fund and the remaining amount should be paid by the other Arab countries.” “

Obviously, the BBC did not see fit to point out to its readers that rather than representing any reality on the ground, the Emir’s statement forms part of a broader propaganda campaign which cannot be seen as disconnected from Qatar’s provision of financial support for Hamas, its cosy connections to the Muslim Brotherhood and its broader ambitions in the region.

For a wider appreciation of the context of the statements made by the Emir of Qatar at the recent conference of the Arab League (an organization which of course came into existence through British midwifery and with one of its aims being the prevention the establishment of a Jewish state), one can take a look at some of Mahmoud Abbas’ comments at the same meeting. Those remarks provide the background to this latest example of the use of Jerusalem as a political propaganda weapon – background which the BBC chose not to present to the readers of this article.

” “The Israeli occupation is systematically and continuously working toward judaizing east Jerusalem,” Abbas told the Arab heads of state.

He said that Israel was also seeking to change the character of the city, expel its Arab residents and assault Islamic and Christian holy sites.

Abbas urged the Arabs and Muslims to go to the United Nations and other international organizations to stop Israel from pursuing its “destructive scheme.”

He also sought their help in putting pressure on Israel to release Palestinian prisoners, whom he described as “brave.”

The prisoners were being subjected to “grave violations,” he said.

Abbas hailed Qatar’s announcement that it would establish a special fund for Jerusalem with a $1 billion budget to support the Arab residents of the city and foil Israel’s attempts to “judaize” east Jerusalem.”

Had BBC audiences wished to read undiluted propaganda, they could have turned to the Emir’s pet TV channel or to some of the Palestinian news agencies. From the BBC, however, one would expect a more discriminating style of reporting, with at least some effort made to establish the facts behind the claims, to provide background and context and to adhere to BBC obligations to accuracy and impartiality.

Instead, we see the unquestioning regurgitation of unbalanced, one-sided propaganda which contributes nothing to BBC audiences’ knowledge or comprehension of the issues at hand and in fact does much to actively prevent understanding of the way in which the spreading of unfounded rumours concerning Jerusalem has long been employed to cynically stir up passions – and often violence – in the region.