A report entitled “Palestinian prisoners in Israeli jails protest death” – which appeared on the Middle East page of the BBC News website on April 2nd 2013 – repeats the practice of promoting unproven claims made by representatives of the Palestinian Authority, as was also the case in much of the BBC’s reporting on the subject of the death of Arafat Jaradat in February of this year.

Whilst noting the disturbances initiated by Palestinian prisoners after the death of a security prisoner from cancer, the BBC article fails to mention that rioting also took place outside prisons – in Jerusalem, Hebron and other places.

Regarding the deceased prisoner, the BBC report limits itself to one short paragraph of information placed near the bottom of the article in the thirteenth paragraph out of seventeen.

“Maysara Abu Hamdiyeh, from Hebron in the occupied West Bank, was serving a life sentence for attempted murder for his role in a foiled attempt to bomb a cafe in Jerusalem in 2002.” 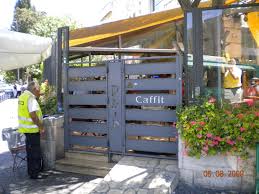 Apparently the BBC does not see fit to trouble readers with the knowledge that the majority of Hebron is in Area A and controlled by the Palestinian Authority rather than “occupied”. It seemingly does also not consider it necessary to mention that Abu Hamdiyeh was connected to both the PA security forces and the terrorist organization Hamas or to note that he was known to be involved in recruitment for paramilitary activities, weapons training, providing weapons and finance for terror and bomb-making in addition to his role in the attempted suicide bombing of Café Caffit in Jerusalem in 2002, in which the awareness of a security guard and a waiter saved the lives of some 60 customers and 12 staff in the café at the time.

No fewer than four paragraphs of the report are dedicated to advancing unsubstantiated Palestinian claims. There is, of course, no evidence for the conspiratorial accusations made by the PA relating to the death of Maysara Abu Hamdiyeh due to terminal esophageal cancer, but that does not stop the BBC from repeating them.

“Palestinian officials claim that Israel did not provide adequate medical care for Maysara Abu Hamdiyeh, who was 64.”

” “The Israeli government is responsible for the martyrdom of prisoner, Maysara Abu Hamdiyeh,” said a statement by Nabil Abu Rudeina, a spokesman for Mr Abbas.

“The continued detention of the prisoners and medical neglect leads to dangerous implications.” “

“Other Palestinian officials accused Israel of denying proper, timely medical care to Abu Hamdiyeh, claiming that his cancer had been left to spread.”

The unquestioning promotion of evidence-free accusations is not ‘balance’ or ‘impartiality’ and the BBC would do well to consider the broader real-world implications of its contribution to the propagation of deliberately engineered rumours designed to whip up fervour and violence on the Palestinian street and to advance the PA’s politically motivated public relations campaign on the subject of Palestinian prisoners. As Khaled Abu Toameh recently observed:

“In a bid to prove to Palestinians that it is taking the issue seriously, the PA leadership has set up a ministry for prisoners affairs headed by Issa Qaraqi, who in the past few years has been waging a relentless campaign against Israel on the issue of the prisoners.

He has also accused Israel of conducting experiments on some prisoners and denying them proper medical care, as well as stealing their organs.” […]

“But these attacks are also intensifying tensions between Israel and the Palestinians and paving the way for violence.

By making serious allegations against Israel, the PA is further radicalizing Palestinians and even driving some of them into the open arms of Hamas and Islamic Jihad.”

Were the BBC to investigate the background to the claims made in this and other cases, it would know that PA representatives have a history of accusing Israel of (among other things) stealing organs from dead terrorists, conducting experiments on prisoners which cause cancer, deliberately neglecting sick prisoners as part of a “policy of slow death” and intentionally killing sick prisoners.

That history of unfounded allegations should be ample reason for any self-respecting media organisation to thoroughly check any current accusations or claims before blindly repeating them – let alone a media organization committed to accuracy and impartiality in its reporting.