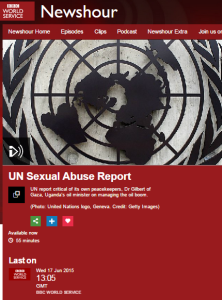 “Last year’s conflict between Israel and Gaza lasted 51 days and claimed more than two thousand lives. Israel and Hamas continue to argue about who was responsible, over the number of casualties and over each other’s conflict during the war. But the impact on Gaza’s infrastructure was undeniably considerable. Its only power station was hit by an airstrike.”

That portrayal is of course inaccurate: the fuel tanks at the Gaza power plant (not the structure itself) were hit by errant tank shells (not by “an airstrike”) whilst the IDF tried to prevent an imminent attack by terrorists carrying anti-tank missiles. Additionally, the conflict was not “between Israel and Gaza” but between Israel and terrorist organisations based in the Gaza Strip and Coomarasamy’s bizarre and unsourced ‘they’re each as bad as the other’ claim that “Israel and Hamas continue to argue” actively hinders audience understanding of the facts behind the conflict.

All that, however, was merely the entrée to the real purpose of this item: licence fee funded promotion of a new book by the BBC’s long-time favourite medic-cum-terrorist supporter. Coomarasamy continues:

“One man who witnessed that war at close hand is a Norwegian doctor, Mads Gilbert. He returned to Gaza to work in al Shifa hospital as he’d done in three previous conflicts there. He documented his experiences – he’s collated them in a new book called ‘Night in Gaza’. So why did he think it was important to do that?”

Coomarasamy makes no effort to relieve listeners of the misleading impressions created by Gilbert’s inaccurate claim of a ‘siege’ on the Gaza Strip or to inform them that the descriptions they hear of a shortage of medical supplies actually have nothing to do with Israel.

Gilbert: “I had been in Gaza for two weeks in June to make a report for the UN about the situation in the healthcare system and basically the whole civilian sector in Gaza was down on its knees because of the siege and then on top of that came this horrific 51 days. Shifa was totally drained of supplies, drugs, equipment – everything you need to run a hospital.”

One of the issues regularly raised on these pages is the BBC’s frequent breaching of its own editorial guidelines on impartiality due to its failure to inform audiences of the “viewpoint” of interviewees. At one point during the item listeners hear Coomarasamy say to Gilbert:

“You are a medical doctor but you are an activist. You are a pro-Palestinian activist. Would you say that’s fair?”

“Like many others I support the Palestinian people’s right to resist occupation and I think that’s part of my medical duty. Medicine and politics are Siamese twins – you can’t separate the one from the other.”

Unfortunately, rather than clarifying to audiences that the Gaza Strip has not been under occupation for a decade and instead of pursuing the subject of what Gilbert really means when he talks of a “right to resist” (in a recent interview with the Guardian, Gilbert stated that “[t]he right to resist implies also the right to resist with arms, if you’re occupied”), Coomarasamy gets into a futile academic discussion with Gilbert about medicine and politics before providing him with the opportunity to whitewash Hamas abuses.

JC: “What about…I mean have you tried to understand the point of view of Hamas and what they were doing in the hospital? Because if you look at the Amnesty International report from last month they very clearly say ‘Hamas forces used the abandoned areas of Shifa, including the outpatients clinic area, to detain, interrogate torture and otherwise ill-treat suspects even as other parts of the hospital continued to function as a medical centre’. And first of all, do you recognize that portrait?”

JC: “But do you recognize the Amnesty International characterization of what was happening in the hospital when you were there?”

MG: “Bear in mind that Amnesty was not allowed to enter Gaza. I am not saying that this is not taking place. I’m saying that where I worked it was a proper hospital. And yes, the Palestinian Authorities had their press conferences outside. I am allowed to work freely. I walk around wherever I want. I’m never controlled. I never have my pictures controlled. So from what I have seen in Shifa hospital and in the other Palestinian hospitals in Gaza, this is not the picture I recognize.”

Coomarasamy ends the interview there and, as has so often been the case in the past, BBC audiences have once again been fed Gilbert’s unhindered falsehoods and propaganda – as well as promotion of his book. Mads Gilbert is not a “pro-Palestinian” activist as claimed by Coomarasamy in his ostensible impartiality box-tick. Those who are truly pro-Palestinian (and perhaps especially those supposedly bound by a professional oath) would not whitewash Hamas’ torture of its political opponents, its exploitation of patients as human shields or its diversion of resources which could improve the lives of ordinary Palestinians for the purposes of terrorism. Sadly, the BBC continues to avoid telling Mads Gilbert as he really is.