The Sunday April 7th 2013 edition of the BBC Radio 4 programme ‘Broadcasting House’ – presented by Paddy O’Connell – included, as usual, a review of the papers by visiting guests. 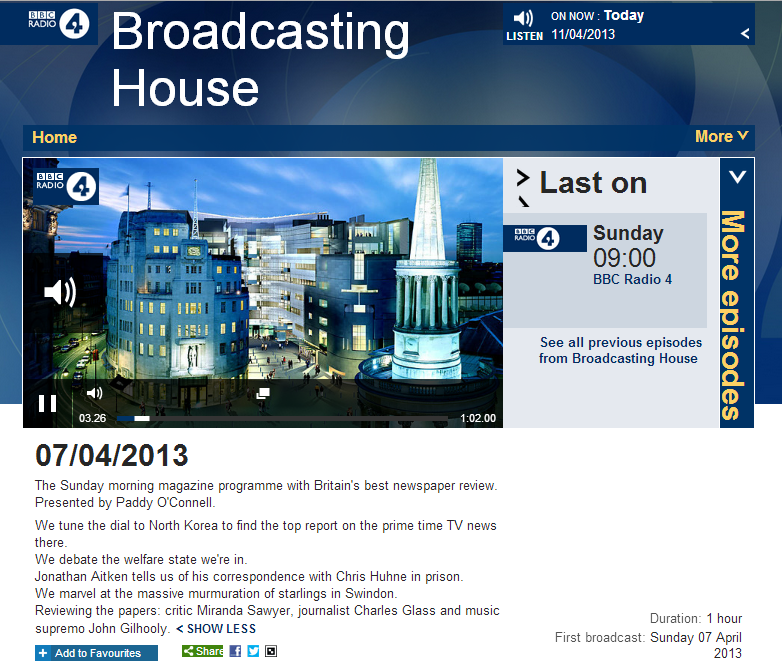 In this particular edition, however, rather than its usual focus on British news or world affairs featuring prominently in the UK papers, the “press panel” segment of the broadcast included a dishonest diatribe by guest journalist Charles Glass.

Glass – the former ABC head of news in the Middle East between 1983 and 1993 – will no doubt be a familiar figure to readers of The Guardian (which recently published Glass’ article on the subject of his “hero” Noam Chomsky) and the Arts Council (i.e. British taxpayer) funded London Review of Books  – the systemic  anti-Israel bias of which was the subject of a 2010 report by ‘Just Journalism‘.

At 45:44 in this recording of the programme Glass says:

“Well, speaking of hate mail, I want to talk about Amira Hass who’s one of the best journalists in Israel. She’s a correspondent in the occupied territories for Ha’aretz and she wrote a column recently about ways for the Palestinians to resist military occupation – the illegal military occupation. She wrote ‘steadfastness and resistance against the physical, and even more so the systemic, institutionalised violence, is the inner syntax of Palestinians in this land’. For that, the Yesha Council – which represents the illegal settlers in the occupied territories – has filed a complaint. They want her to be prosecuted.”

PO’C: “And when you use the word ‘illegal settlers’, do you mean that you find the settlers to be illegal or…

CG: “I mean that under international law, they’re not allowed to take other people’s land and then put people on there.”

O’Connell immediately folds, failing to point out that Glass is not an expert on international law and neglecting to inform listeners that Glass’ verbal caricature in no way reflects either the complexity of the subject or the diversity of genuine legal opinion pertaining to it. He continues:

PO’C: “And the whole settler question…she’s in trouble in the newspaper, is she? What’s happening with her own publishers?

CG: “Well Ha’aretz has two excellent correspondents – Gideon Levy and Amira Hass – who write regularly about the occupation. Ha’aretz has so far withstood all the pressure to fire them and both continue to write. Ha’aretz is a.. really is a good paper.”

Whilst it is hardly surprising to find a person of Glass’ opinions promoting Levy, Hass and their paper in such glowing terms, the BBC must be called to account for allowing his deliberately disingenuous representations publicity – in obvious breach of its own editorial guidelines on accuracy and impartiality.

Ramallah resident Amira Hass’ March 3rd article, which Glass so enthusiastically defends, opened with a clear call for Palestinians to engage in violence.

Later on in the article she excuses the attempt to cause physical harm by writing:

“But in the inner syntax of the relationship between the occupier and the occupied, stone-throwing is the adjective attached to the subject of “We’ve had enough of you, occupiers.” “

Hass even suggests in her article that “basic classes in resistance” should be taught in Palestinian schools. “Resistance” – as someone as familiar with the Middle East as Charles Glass should well know – is the Western public opinion-orientated euphemism for terror.

In other words, not only does Amira Hass find it perfectly acceptable for Palestinians to attack Israeli civilians with rocks, stones and who knows what else – she thinks that it is their duty to do so. Apparently, so does Charles Glass.

It is this incitement to violence which prompted the Yesha Council to complain about Hass’ article – not the sentence which Glass disingenuously elected to quote. His dishonest characterisation of that complaint as “hate mail” reveals much about both Glass’ political sympathies and his moral stance.

By providing a platform for Glass to whitewash Hass’ call for what is – let’s be perfectly frank about this – the organized and pre-meditated attempted murder of Israeli civilians, the BBC has rendered itself complicit to that incitement. Although it fairly successfully avoids reporting on the majority of the dozens of incidents in which Israelis are attacked – and sometimes killed – by Palestinian stone-throwers, it would not be too difficult for the BBC to apprise itself of the consequences of such shockingly frequent acts of terror.

We cannot, surely, imagine the BBC playing host to the champion of an inciter of violence against any other group of people, but this brief broadcast shows how the lazy delegitimisation and dehumanization of Israelis has become commonplace in BBC discourse.

Glass’ use of the term “illegal settlers” – and O’Connell’s repetition of it – is an example of the way in which language is used to advance a politically motivated value judgement. That term deliberately categorises the people to whom it refers as “illegal”. It does not refer to the legal status of the communities in which they happen to live or to the actions and decisions of their government, but to the actual human beings it seeks to dehumanize and delegitimize. From there it is of course not a great leap to defending those who encourage the throwing of rocks at an “illegal” adult, child or baby. Ironically, it is all too frequently the same people dubbed ‘illegal’ by this BBC journalist and his guest who bear the brunt of what the BBC is so reluctant to name as terror.

The same BBC which is so sensitive about making “value judgements” on the subject of terrorism apparently has no such qualms when it comes to making judgments about a specific sector of Israeli society. Its kangaroo court of language censors appears to have nothing to say about the designation of certain human beings as ‘illegal’ purely on the basis of their post code – with all that entails.

The vast majority of listeners to this programme will have no idea of the real content of Amira Hass’ article. Neither will they know much about the suffering caused to those on the receiving end of the types of “resistance” which Hass advocates. What they will have come away with, however, is the impression that a bunch of “illegal settlers” have made an unjustified complaint against an “excellent” journalist from a “good” paper.

That is about the most inaccurate and partial way this story could have been spun and the BBC collaborated with the broadcast of that spin to millions of listeners. In doing so – intentionally or not – it also became party to helping incitement along.