Early on the morning of Tuesday, April 30th, thirty-two year-old Evyatar Borovsky from Yitzhar (the father of five children) was murdered by a Palestinian terrorist whilst standing at a bus stop at the Tapuach junction in Samaria.

An article on the subject titled “Israeli settler killed in West Bank” appeared in the Middle East section of the BBC News website shortly afterwards.

The article, which has been amended several times since its initial publication, opens:

“An Israeli settler has been killed by a Palestinian at a bus stop in the northern West Bank, police say.”

Interestingly, the BBC writer found it necessary to describe the Israeli man as a “settler” both in the headline and the article, although audiences would have understood the sentence perfectly well without that political addition. The use of the word “killed” does not reflect the fact that the assailant was in prior possession of a knife and stabbed his victim from behind. In the UK, that would most likely be described as murder.

Tapuach Junction is of course actually near Kfar Tapuach and is closer to Ariel than to Nablus (Schem).

“Reports say the Palestinian stabbed the man before grabbing his gun and shooting him. The attacker was shot and wounded by security forces, police say.

Palestinians and Israeli troops have clashed recently in the West Bank, but attacks on settlers there are rare.”

That, of course, is a complete BBC fabrication.

The article also expands that theme later on:

“Tuesday’s attack is the first time a settler has been killed by a Palestinian in the West Bank since 2011.”

Indeed, since September 2011 there have, fortunately, been no fatalities as a result of terror attacks in Judea and Samaria, but that is not through want of trying, as the family of Adele Biton – who is still fighting for her life after the stone-throwing attack on her mother’s car in March – is only too aware. 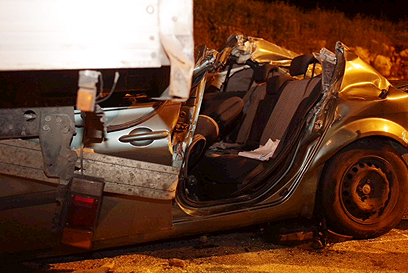 That means that in the one hundred and fifty-one days from the beginning of November 2012 until the end of March 2013, four hundred and sixty terror attacks took place in Judea and Samaria. That is an average of over three a day.

Judea and Samaria are 125 kilometers in length and between 25 and 50 kilometers wide, with a total area of 5,860 km2, and with the areas under the control of the Palestinian Authority off limit to Israelis. The English county of Cumbria is 907 km2 larger than the whole of Judea and Samaria. If the residents of Cumbria were to suffer an average of three daily terrorist stabbings, shootings, fire-bombings, IED attacks or attempted murder with rocks thrown at moving vehicles, we can be pretty confident that the BBC would not describe such attacks as “rare” – even if they did not end in fatalities.

Not only is this latest attempt by the BBC to downplay and whitewash Palestinian terror against Israeli civilians living in Judea and Samaria a gross breach of BBC Editorial Guidelines on accuracy and impartiality, it is also quite frankly repugnant.

Update: It appears that approving messages of support for the murderer have been posted on the official Facebook page of Fatah – PA president Mahmoud Abbas’ own party. We will of course await the ensuing BBC update to its report.

“Palestinians and Israeli troops have clashed recently in the West Bank, but fatal attacks on settlers are rare.”

Whilst the amendment is welcome, it contributes nothing towards accurately informing BBC audiences of the scale of terrorism against Israeli civilians in Judea and Samaria and still airbrushes the intentions of those perpetrating the daily attacks out of the picture. “Fatal attacks” – i.e. murder – may not be a quotidian event, but attempted murder certainly is and the BBC’s whitewashing of that fact continues to compromise its reputation for accuracy and impartiality.