In the first part of this article we discussed Martin Asser’s partisan treatment of the subject of Palestinian refugees in which he promoted claims of an Israeli “pre-determined plan to expel Palestinian civilians”.

One very notable feature about Asser’s article is the way in which he isolates the subject of Palestinian refugees from the context of the war which raged at the time – thereby avoiding the subject of responsibility of any parties other than Israel for the creation of the refugee problem. In this article we will look at a case study – the events which led to the departure of the Arab population of the town of Tiberias – which provides a good example of the many factors deliberately ignored by Asser in order to enable the promotion of his one-sided narrative.

On the eve of the War of Independence Tiberias had a population of around 11,000 – the majority of whom were Jews. The Arab population of the town numbered some 5,700 people; mostly Muslims but also a small Christian community. During the time of the British Mandate the residents of Tiberias had begun to settle outside the Old City walls, with Jews and Arabs building separate neighbourhoods as well as mixed ones. Traditionally, relations between Jews and Arabs in the town had been good, with the leading Arab family at the time – the Tabaris, who apparently originated in the Houran region of today’s Syria – being renowned for its moderation and Tiberias saw very little trouble during the Arab riots of 1921 and 1929.

During the Arab revolt of 1936 – 1939 extremists began to dictate the agenda and that changed, with frequent attacks taking place including the massacre of 19 Jews – among them eleven children – in the Jewish neighbourhood of Kiryat Shmuel on October 2nd 1938 and the murder of the Jewish mayor of Tiberias, Zaki Alhadeef on October 27th of the same year.

With the announcement of the UN Partition Plan decision on November 29th 1947, most mixed towns in Mandate Palestine were plunged into unrest, but an agreement between Jewish representatives from Tiberias and the Tabari family initially prevented trouble there. That agreement however did not prevent either side from making preparations for other eventualities. The Haganah had mostly local people engaged in guarding the Jewish neighbourhoods. The Arabs also amassed weapons and their numbers were increased by gang members from the nearby village of Lubiya.

By the end of February 1948 around 400 mostly local members of the Haganah and 60 trained members were stationed in the town. The Arab fighters numbered around 500, including gang members and 30 Syrian soldiers. In the nearby villages of Turan and Ilaboun were stationed 800 members of Fawzi al Qawugji’s ‘Arab Liberation Army‘ (created by the Arab League) which had infiltrated from Lebanon in January 1948 with little or no British opposition and now awaited orders to attack Tiberias. At Tsemach – some thirteen kilometers south of Tiberias – were soldiers from the Jordanian Arab Legion. In Tiberias itself, British paratroopers were stationed in the police building, with their commander Colonel Anderson known to lean towards the Arab side.

Relative quiet reigned in Tiberias until March 10th 1948 when a rumour spread among the Arab population that a Jewish leader had been killed by Arabs and that the Jews were planning reprisal attacks. The Arabs opened fire and fighting continued for three days until a British-brokered ceasefire was agreed.

The ceasefire held until April 5th 1948 when Arab gunmen opened fire on Jewish shoppers at the market, killing five elderly people and taking ten women prisoner. The Haganah responded, taking 12 Arabs prisoner, and fighting took place all over the town. Another British-brokered ceasefire resulted in an exchange of prisoners, after which the two sides marched together down the town’s main street – Galilee Street – to demonstrate their wish for peace. 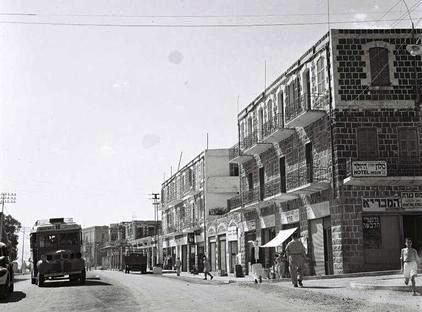 In the meantime, the Mufti Haj Amin al Husseini intervened in an ongoing dispute between the leaders of the two main Arab families in the town – the moderate Tabaris and the extremist Subhi family. Husseini appointed the latter as leader of the Arab forces in Tiberias.

That ceasefire was short-lived and on April 8th Arab gunmen again opened fire on shoppers at the market and on Haganah positions, took over the Scottish hospital and the Tiberias Hotel and blocked the main street of the town. British attempts to secure a ceasefire were unsuccessful and fierce fighting continued. With the local members of the Haganah exhausted from days of non-stop fighting, it was decided to send in additional troops including the Golani Brigade to try to bring an end to the fighting.

Several days of fierce battles ensued until, on the morning of April 18th, representatives of the Arab forces approached the British commander and requested to leave the town with their weapons. Colonel Anderson then summoned the town’s Jewish commanders and informed them that the British would be evacuating its Arab residents and that as of ten days later, British forces would leave Tiberias in Jewish hands – as indeed they did on April 28th 1948.

The Jewish representatives responded that they would happily take control of the town, but requested that the Arabs simply hand over their weapons and that they not leave. However, that afternoon trucks and buses began arriving in Tiberias and, under British supervision, the town’s Arab population was evacuated  – some to Nazareth and others to Jordan.

The day after the Arab exodus, the Haganah commander of Tiberias put out a public announcement in which he forbade the doing of any damage to Arab property in the town, including Christian and Muslim holy places.

Obviously, as is true in many other cases too, the reasons behind the flight of Tiberias’ Arab population are considerably more complex than suggested by the simplistic picture painted by Martin Asser in his article. In addition to his making no attempt whatsoever to include the context of years of violence which preceded the actual War of Independence, Asser conveniently neglects to make any mention of the foreign Arab forces at work or the divisions between differently inclined Arab groups within mandate Palestine and he totally ignores the part played by the British in the whole story.

Asser’s stereotypical presentation of Palestinian Arabs as a homogenous group of passive victims is as erroneous as his presentation of Israelis as aggressors and his political polemic does nothing to contribute to the understanding of BBC audiences of the real historical facts behind the issue of Palestinian refugees – quite the opposite in fact.

Amazingly, the BBC has allowed this article to stand for six years – despite having been alerted to its inaccuracies as far back as 2007. It is hence little wonder that BBC impartiality continues to be called into question.

BBC’s ‘Obstacles to Peace’: wrong on right of return – Part 1

BBC’s “Obstacles to Peace” do not hold water – part 1

BBC’s “Obstacles to Peace” do not hold water – part 2