This month BBC Radio 4 has been running a series titled “Making History: The Storytellers Who Shaped The Past by Richard Cohen” which is based on Cohen’s book of the same title and which it describes as follows:

“Book of the Week. An epic exploration of who writes about the past and how the biases of certain storytellers continue to influence our ideas about history, and who we are, today.”

The tenth and final episode of the series is titled “Bad History – truth versus patriotism”. 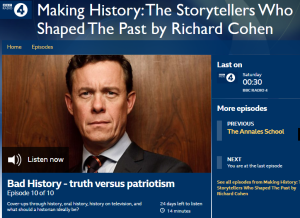 From 02:30 listeners hear the following:

“Most countries have supplied bits of history to order. […] In the Middle East Israelis were taught for decades that most Arabs who fled their country in the wake of the 1948 war left voluntarily: the opposite of the truth.”

A lot of that assertion rests on the use of the word voluntarily – i.e of one’s own free will. Obviously one can debate whether people caught up in any military conflict throughout history (or indeed in the present) have actually left their homes and livelihoods of their own free will or rather because circumstances led them to believe that was the best, or only, option open to them at the time.

Nevertheless, what BBC Radio 4 audiences are being told here is that “the truth” – a decidedly unnuanced concept – is that “most Arabs” who fled before or during the War of Independence did not do so “voluntarily”.

No evidence is provided to support that claim. Listeners are told nothing of the variety of circumstances that led people to flee during different phases of the conflict which have been the topic of research for many a historian.  As noted by CAMERA’s Gilead Ini in an extensive study:

“Historians agree that there was no single cause of the Arab flight from Palestine. In large part, the masses fled because they saw the Palestinian elite doing the same thing. In part, it was in response to exhortations by Arab military and political leaders that Palestinian civilians evacuate their homes until the end of the fighting. Vast numbers were simply fleeing the heavy fighting that surrounded them, or that they expected to soon disrupt their lives. In some instances, Palestinians were forced from their homes by the Jewish military.”

How disappointing then for Radio 4 audiences that in a programme supposedly about history and “truth”, the BBC itself “supplied bits of history to order” without any evidence or proper context.

BBC’S ‘OBSTACLES TO PEACE’: WRONG ON RIGHT OF RETURN – PART 2