Precisely what does the BBC mean when it uses the word ‘occupation’? We do not have to suppose or speculate about the answer to that question because the BBC’s Key Terms guide tells us exactly what it means.

This is our preferred description. It is advisable to avoid trying to find another formula, although the phrase ‘occupied West Bank’ can also be used. It is, however, also advisable not to overuse the phrase within a single report in case it is seen as expressing support for one side’s view.”

In other words, when it uses the word ‘occupation’, the BBC intends readers to understand that it is describing areas which came under Israeli control as a result of the Six Day War. 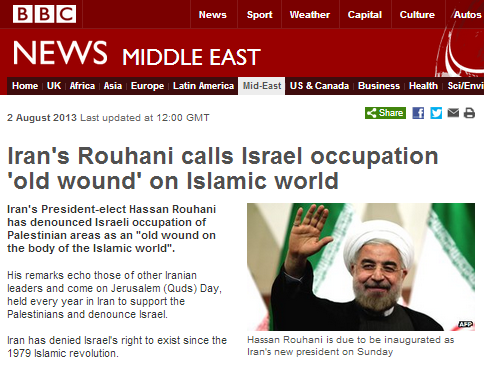 As others have noted, Rouhani of course made no such distinction between areas east or west of the ‘green line’: his ‘problem’ is with Israel as a whole – not just this or that particular part of it.

The article’s strap-line further shows the BBC’s transparent attempt to tone down Rouhani’s rhetoric by insertion of the phrase “Palestinian areas”.

“Iran’s President-elect Hassan Rouhani has denounced Israeli occupation of Palestinian areas as an “old wound on the body of the Islamic world”.”

What does the BBC mean when it says “Palestinian areas”? We do not have to guess about that one either.

This phrase has become more widely used by politicians and broadcasters to refer to the Occupied Territories – for example, to explain why the construction of settlements is considered illegal by the UN.

Critics of the phrase say it is not strictly accurate because, for example, the West Bank was captured from Jordan in 1967.

The BBC Governors considered this issue in a complaint which was referred to in the programme complaints bulletin of July 2004. Their decision was that, although the complainant objected to references to ‘Palestinian land’ and ‘Arab land’, these terms “appropriately reflected the language of UN resolutions”.

So the use of the phrase “Palestinian areas” is clearly intended to reinforce the false impression that Rouhani was referring to land gained by Israel in the 1967 war.

Why the BBC should find it necessary to tone down Rouhani’s remarks in a manner which it presumably thinks makes them more palatable to Western audiences is anybody’s guess, especially as other members of the Western media managed to report the geographical intentions of Rouhani’s words accurately.

The problem is, of course, that the BBC has invested much in educating its audiences with regard to its own definition of “occupation”, but rarely bothers to clarify the fact that for other parties – including Iran and its terrorist proxies – “occupation” means every last inch of Israel. Hence, average readers would be liable to fail to grasp the real significance of Rouhani’s words quoted later on in the article:

Speaking at a rally, Mr Rouhani said: “There is an old wound on the body of the Islamic world, under the shadow of the occupation of the holy lands of Palestine and Quds [Jerusalem].

But the BBC’s whitewashing does not stop there.

“His remarks echo those of other Iranian leaders and come on Jerusalem (Quds) Day, held every year in Iran to support the Palestinians and denounce Israel.”

There is nothing ‘pro-Palestinian’ about the hate-filled annual event which is Al Quds day and “denounce” is a very euphemistic way to describe the aims of an event that includes demonstrations of support for an Iranian-backed terrorist organisation which also make no distinction between pre and post 1967 Israel.  As the NYT correspondent in Tehran pointed out:

That’s “Death to Israel”, dear BBC – not “Death to the bits of Israel east of the ‘green line’ “.

Another BBC report on the subject of Rouhani’s inauguration appeared on the BBC News websites’s Middle east page on August 3rd. In that article too, the BBC misleads readers as to the meaning of Rouhani’s remarks.  [emphasis added]

“The day before he took office, Mr Rouhani said Israeli occupation was an “old wound on the body of the Islamic world”, as Iran marked its annual Jerusalem (Quds) Day.

His remarks echo those of other Iranian leaders on the day dedicated to supporting the Palestinians and denouncing Israel.”

It appears that the BBC is having difficulty sobering up after its ‘Rouhani the moderate reformer’ binge following the June elections and that, rather than engaging in a critical review of its own misguided stance, is now attempting – fingers placed firmly in ears – to bend reality to fit its own narrative.

That policy of course does nothing to meet the corporation’s obligation to enable its audiences to “build a global understanding of international issues”.

An edition of a BBC World News programme has the BBC Persian service’s Rana Rahimpour translating Rouhani’s words as follows:

“The occupation of the holy land of Palestine and Quds – which is Jerusalem – is an old wound on the body of the Muslim world.”

“But he never mentioned Israel or the Zionist regime, as Iranian politicians refer to Israel…”

Of course Rouhani had no need to mention Israel by name: his audience at what Zeinab Badawi ridiculously insists upon calling the “pro-Palestinian rally” would have understood his intention perfectly well, given the Iranian regime’s record and its long-standing support for terrorist organisations which do not accept Israel’s existence in any form. BBC audiences, however, will remain in the dark due to this latest bout of the syndrome described by Sohrab Ahmari and James Kirchick in 2012 as “We Are All Persian Grammarians Now“.

Clearly, the BBC could have avoided this case of inaccurate and misleading reporting had it simply been more vigilant in its use of quotation marks in that headline.