On August 1st 2013, the BBC News website published a ‘guide’ to Iran’s ‘Al Quds day’ events – held this year on the following day, August 2nd – on its Middle East page. The piece was written by Siavash Ardalan of the BBC Persian service. 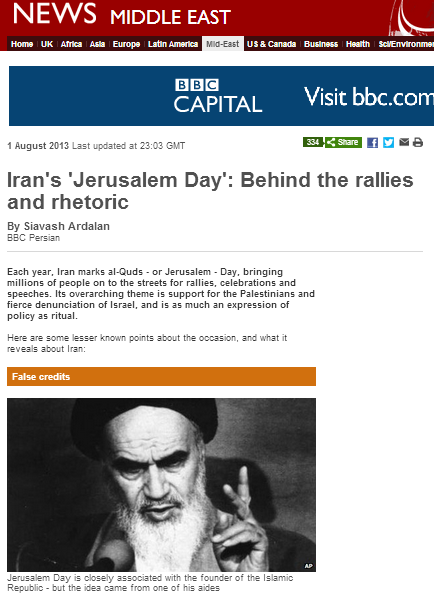 In the article’s first paragraph we yet again see a euphemistic description of the event:

“Its overarching theme is support for the Palestinians and fierce denunciation of Israel, and is as much an expression of policy as ritual.”

In fact, both in Iran and elsewhere, the overriding characteristic of this ‘happening’ is calls for Israel’s destruction and displays of support for terrorist organisations dedicated to that cause – especially Hizballah. That – by any conventional definition – is rather more than “fierce denunciation”.

“Israel, the enemy of mankind, the enemy of humanity, which is creating disturbances every day and is attacking our brothers…, must realise that its masters are no longer accepted in the world and must retreat. They must give up their ambitious designs, their hands must be severed from all the Islamic countries and their agents in these countries must step down.

Quds Day is the day to dash their hopes and warn them that those days are gone.”

“Jerusalem Day rallies are a must for Iranian politicians. Any politician who hopes to establish their credentials has to be seen and hope to be heard delivering a tirade against Israel. It confirms their loyalties and reiterates their identification with what has become an unshakable tenet of Iran’s foreign policy.

The official stance is that Israel is, as a matter of moral principle, illegitimate. However, it does not follow from this that Iran is under the obligation to take direct and pre-emptive action to destroy Israel. This will happen in due course, the rhetoric goes.

Iranians are well-practised in how to express this idea in short soundbites that are broadcast non-stop during the day of the rallies on state radio and TV. Iranian politicians have particularly become skilled at this. The sentences express a moral outrage over Israel’s existence as well as its actions but fall short of requiring that Iran does anything too harsh about this “moral violation”.” [emphasis added]

Of course some might be of the opinion that Iran’s long-standing supply of funds and weapons to its proxies in the Gaza Strip and Lebanon rather contradicts the eccentric, passive picture which Ardalan is trying to paint. He goes on:

“President Ahmadinejad, however, tried introducing a new element to the traditional narrative: Holocaust denial. His attempts failed and the Supreme Leader, who shares Mr Ahmadinejad’s denial but keeps it low-profile, along with Mr Ahmadinejad’s political rivals, did not allow for this deviation.” [emphasis added]

Ardalan’s claim that Ahmadinejad’s Holocaust denial was kept in check on Al Quds day itself  is purely cosmetic nit-picking considering that Iran held an International Holocaust Cartoon competition in 2006 and a Holocaust denial conference the same year, with subsequent similar events and a website of Holocaust cartoons launched in 2010.

“The idea behind Jerusalem Day rallies was to gather all fasting Muslims every year on the last Friday of Ramadan to show their opposition to the existence of Israel. However, Jerusalem Day did not develop beyond an Iranian experience.

Iranian leaders may have initially been motivated by the desire to further an anti-Israeli drive. However, the need to consolidate and project Iran’s leadership and influence in the Islamic world as well as intimidating opposition forces inside remained as an incentive to keep the tradition alive.

Jerusalem Day did not achieve the former. As it turned out, whatever leadership and influence Iran wields in the Islamic world has little to do with the rallies on Jerusalem Day. Apart from these annual rallies in some Western and Asian capitals, usually organised and financed by Iran, the ritual never took root among Muslims at large.”

Whilst it may indeed be the case that the attraction of Al Quds day is limited, Ardalan’s rather transparent attempt to play down the spread of the event to other countries and the involvement of non-Shiia and non-Muslim groups is all too obvious.

In this year’s Al Quds day event in Berlin some 900 people took part.

“Police officials told The Jerusalem Post that roughly 900 Islamists marched along the Kurfürstendamm shopping strip, calling for the abolition of the Jewish state.

Supporters of Hezbollah and Iran blanketed the area with Hezbollah flags and chants declaring “Zionists are fascists.” […]

Despite the EU’s decision in late July to outlaw Hezbollah’s military wing, yellow Hezbollah flags featuring the AK-47 rifle were waved at the march. […]

According to German intelligence reports from 2012, there are 250 active Hezbollah members in Berlin and 950 across the Federal Republic.”

BBC audiences would not have found any mention of that event in the ‘Europe’ section of the BBC News website. Neither would they find any BBC coverage of the march – complete with racist placards – held in London on August 2nd, despite the fact that it commenced outside the BBC building in Portland Place.

That rally was as usual organized by the Iranian regime-linked ‘Islamic Human Rights Commission’ – a registered charity whose chair, Massoud Shadjareh, has been quoted and promoted by the BBC on numerous occasions over the years. The event was also supported by  various non-Shiia bodies and non-Muslim organisations such as the ‘Scottish Palestine Solidarity Campaign’, ‘Jews for Boycotting Israeli Goods’ – one of the founders of which, Tony Greenstein, has appeared on BBC programmes – and the ‘Stop the War Coalition’ – members of which are also to be found not infrequently as guests of the BBC.

In contrast to the curious little local custom – odd, but harmless – which this BBC article tries to make Al Quds day out to be, it is in fact a well-organised, well-funded vehicle for promoting racist hatred and glorifying terrorism.  BBC audiences are entitled to expect to read the truth about it rather than Ardalan’s insipid, almost anthropological, whitewash.