Recently we asked here “what are the millions of viewers of BBC television news being told about the recent early release of 26 men convicted of murder, attempted murder or accessory to murder?”. An additional answer to that question comes in the form of another filmed report by Yolande Knell on the subject, which was both broadcast on BBC television news and promoted on the Middle East page and the Asia page of the BBC News website. 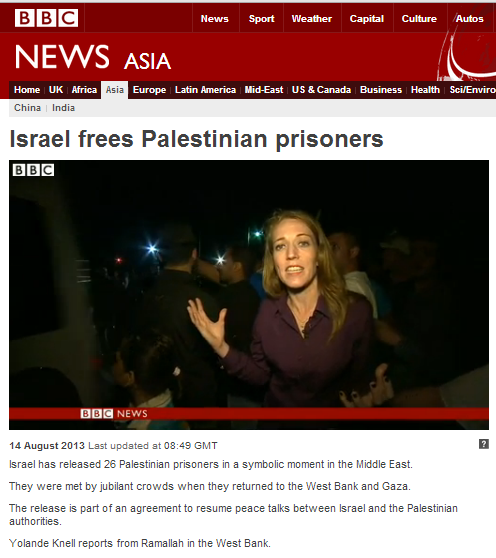 Knell’s report opens with her once more aiming to recruit viewers’ emotions by the use of language such as “loved ones” and “home” and with excessive focus on the length of sentences.

“Amid the darkness; scenes of celebration. Most of these Palestinian families had waited twenty years to see their loved ones freed from Israeli jails. A total of twenty-six men were released – the first group from over a hundred long-time prisoners that Israel’s agreed to send home in the coming months.”

The report next cuts to footage of Nihad Jendia – sentenced to twenty-five-and-a-half years in prison for his part in the murder of 64 year-old Zalman Shlein in 1989, although the BBC caption of course does not inform viewers of that fact.

“Thank you, thank you to the president. With the support of the Palestinian people, we are released.”

The camera then turns back to Knell and it is well worth taking note of her facial expressions and hand gestures as she says;

” [unintelligible]… detainees are being greeted here as heroes of the Palestinian cause, many Israelis view them as terrorists and that’s why this prisoner release is really adding to the charged atmosphere surrounding the renewal of negotiations.”

There is Knell yet again adopting and amplifying the language of terrorists and their supporters. There she is once again suggesting to BBC audiences that there is a justifiable basis for seeing the murderers of pensioners, women and children as “heroes” despite their having been convicted of terrorism in a court of law.

And there she is implying that it is the fact that “Israelis view them as terrorists” which puts strains on peace negotiations rather than the fact that the foreign-funded Palestinian Authority – the body supposed to be preparing its people for peace – organized public celebrations to glorify the acts of terrorism perpetrated by these prisoners.

“In Israel relatives of those killed by some of the Palestinians being sent home held protests. Even the cabinet was divided.”

The report then cuts to an interview with Minister Uzi Landau who says:

“Well, I was against it. The reason why is very, very simple. You enter negotiations with full reciprocity. If you make gestures or concessions you expect the other side to make something similar and I don’t see the Palestinians doing anything.”

And of course no recent BBC report would be complete without the promotion of the BBC’s ‘theme of the week’, so Knell rounds off her report with the following:

“This week began with the Israeli government giving final approval for over a thousand new settler homes to be built on occupied land that the Palestinians want for their future state. As Israeli and Palestinian officials prepare for fresh talks in Jerusalem, both sides are again struggling to deal with deep public scepticism and mutual distrust.”

When is the BBC going to get round to putting the Palestinian Authority’s literal and figurative embrace of convicted murderers and terrorists onto the lists of ‘obstacles to peace’ and “core issues” it promotes to audiences?