At around 16:30 on August 22nd four missiles were fired from the Tyre area in southern Lebanon at communities in northern Israel. One missile was intercepted by the Iron Dome defence system and two fell in populated areas. The BBC reported the incident in an article titled (latest version) “Rockets fired at northern Israel“.

Version 3 of the article: 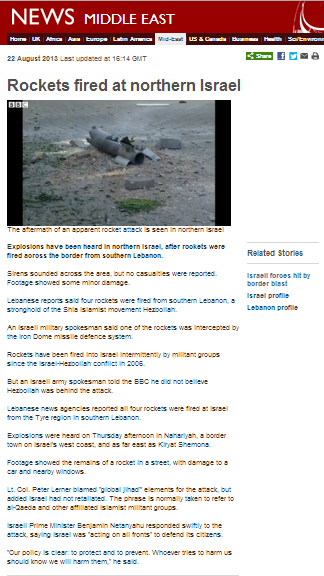 Version 4 of the article:

A short sequence of film at the head of the article is curiously captioned:

Version 3 of the article stated:

“Sirens sounded across the area, but no casualties were reported. Footage showed some minor damage.”

“Sirens sounded across the area, but no casualties were reported. Footage showed some minor damage at a kibbutz near the coastal town of Nahariya.”

As details of the incident unfolded it was learned that in addition to the damage to vehicles and homes caused by the 122 mm rocket which landed in Kibbutz Gesher HaZiv – some of which is shown in the BBC’s footage – another missile hit an additional community in the area, landing near a complex which houses some 50 elderly Holocaust survivors and damaging several homes, but fortunately with no injuries sustained.

Both versions of the BBC article state:

“Rockets have been fired into Israel intermittently by militant groups since the Israel-Hezbollah conflict in 2006.”

Readers unfamiliar with the region would be likely to understand that sentence as meaning that only since 2006 have missiles been “intermittently” fired into Israel. There have of course been some ten incidents in which missiles have been fired from southern Lebanon by assorted terrorist organisations in the seven years since the end of the Second Lebanon War – all of which were violations of UN SC resolution 1701 which ended the conflict, as is the presence of armed terrorist militias – including Hizballah – in southern Lebanon.

The BBC does not make those facts clear to its audiences and neither does it sufficiently clarify the fact that terrorist missile and artillery fire from southern Lebanon at civilian communities in northern Israel has been going on since the early 1980s.

The omission of that relevant context compromises the ability of BBC audiences to understand the full significance of the story.

An official from the Abdullah Azzam Brigades has claimed responsibility for the rocket attacks.