Still available online under the title “On this Day” is a BBC report from October 6th 1973 which informs readers that:

“Heavy fighting has erupted between Arab and Israeli forces along two fronts.

To the south, Egyptian armoured forces have broken the Israeli line on the eastern bank of the Suez Canal.

In the north, Syrian troops and tanks are battling with Israeli defences along the Golan Heights seized by Israel from Syria in 1967.

Both sides have accused each other of firing the first shots, but UN observers have reported seeing Egyptian and Syrian troops crossing into Israeli-held territory.” [emphasis added]

The same obviously misleading statement is made in the caption to the accompanying illustrative photograph: 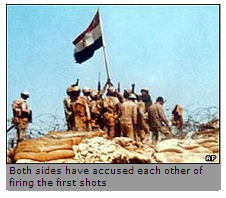 Clearly, both the article and the photograph were uploaded to the BBC website many years after the exact circumstances of the start of the Yom Kippur War had been amply clarified.

Perhaps a clarification is finally in order after forty years?