On Sunday December 1st two year-old Avigail Ben Zion was released from hospital in Jerusalem where she had been treated for the fractured skull she sustained in the stone-throwing attack on her mother’s car the previous week.

As was noted here at the time, that incident – like many other non-fatal attacks on Israelis – was not reported by the BBC, despite its having an office eleven minutes away from the site of the attack in south Jerusalem.

A reader who contacted the BBC regarding that failure to report the attack on a woman and three small children received the following reply:

“We do not report every incident in the conflict between Israel and the Palestinians. This does not in any way mean that we judge the attack which injured the toddler as not serious important [sic], but we cannot report every case where there is a casualty.  Naturally the story received coverage in Israeli media as one would expect, but this does necessarily mean we would report it too.”

The writer of that reply – and apparently the BBC in general – clearly does not grasp that the issue here is not one of how the BBC chooses to “judge” the seriousness or importance of an incident.  Such unsolicited judgement is neither necessary nor relevant to anything except the BBC’s own sense of self-importance.

What is relevant, however, is that the BBC is obliged under the terms of its charter – its constitutional basis – to fulfil the public purpose of informing and providing context to audiences in order to enable them to form informed opinions on “international issues”. 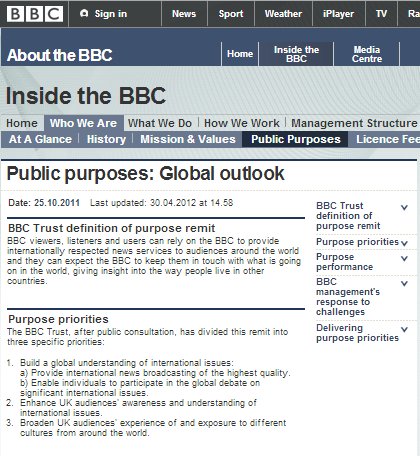 One such international issue is the talks currently going on between Israel and the PLO in the framework of the search for a peaceful solution to the Arab-Israeli conflict. It is a subject which the BBC has covered extensively, producing numerous reports and backgrounders on the subject.

The issue of the rising scale of terror attacks against Israeli civilians even as those talks continue is, however, one which has been largely ignored or downplayed by the BBC. That means that its audiences have no appreciation of the influence of those quotidian attacks (especially those in which children are injured) on Israeli public opinion regarding the issue of the ‘peace process’ and are deprived of the context necessary to understand Israeli policy and actions – as they were, for example, at the beginning of Operation Pillar of Cloud in November 2012 because the BBC had previously under-reported the missile attacks on Israeli civilians living in proximity to the Gaza Strip.

Hence, the relevance of the BBC’s decision not to report on a terror attack against a toddler and her family at rush hour in Israel’s capital city is not to be found in the BBC’s assessment of that incident’s ‘seriousness’ or ‘importance’, but in the fact that by not reporting it, the BBC is failing to meet the obligations to inform audiences which are its very raison d’etre.