BBC Radio 4’s weekly programme titled ‘Sunday’ is described on its webpage as providing audiences with “the religious and ethical news of the week, regularly presented by Edward Stourton”. On January 5th the programme included an item relating to the recent ‘Bethlehem Unwrapped‘ event held in London.

The programme can be heard here and the item concerned begins from around 37:35. 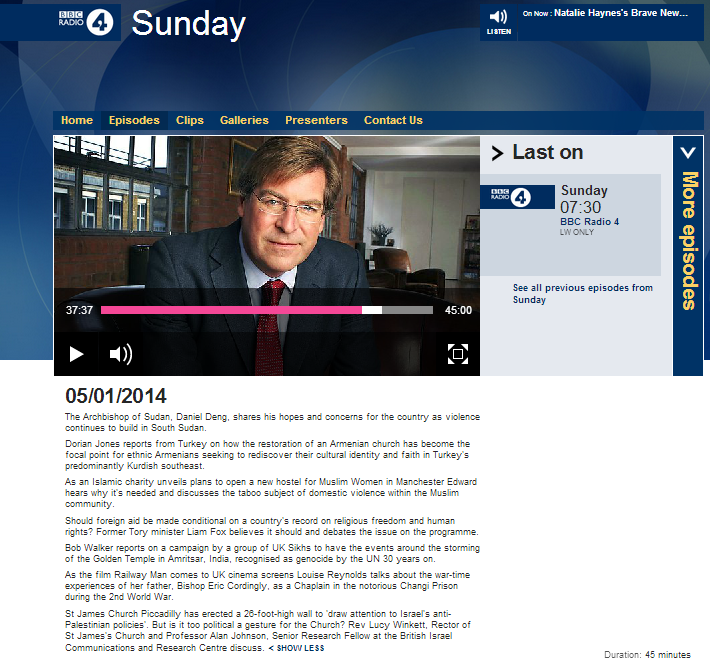 The synopsis on the webpage states: [emphasis added]

“St James Church Piccadilly has erected a 26-foot-high wall to ‘draw attention to Israel’s anti-Palestinian policies’. But is it too political a gesture for the Church? Rev Lucy Winkett, Rector of St James’s Church and Professor Alan Johnson, Senior Research Fellow at the British Israel Communications and Research Centre discuss.”

That apparently quoted interpretation of an anti-terrorist fence designed to curb the murder of civilians as being “anti-Palestinian policies” (rather than anti-terrorist policies) is bizarre and inaccurate in itself and it is notable that the BBC both elects to adopt that description and fails to inform audiences of the origin of the quote.

At the beginning of the programme Stourton says: [emphasis added]

“One of London’s most prominent churches has, for the twelve days of Christmas, been covered by a life-size replica of the Israeli separation barrier around Bethlehem.”

Introducing the item itself later on, he says:

“St James’ Piccadilly is a gem among London churches; a small Christopher Wren masterpiece which at Christmas time usually sits as prettily as a chocolate box lid amid the glamour of one of the capital’s smartest shopping streets. This year it’s been hidden behind a twenty-six foot-high replica of the separation barrier which the Israelis have erected around, among other places, the town of Bethlehem on the West Bank. […]” [emphasis added]

So, before the item even begins audiences have been fed with the notion of the anti-terrorist fence as a manifestation of “anti-Palestinian policies” and twice informed that the fence is located “around” Bethlehem.

Sadly, there is nothing new about the BBC misleading its audiences with the inaccurate claim that the anti-terrorist fence surrounds Bethlehem: Yolande Knell did the exact same just days beforehand in her Christmas Eve report and as we noted here at the time:

“Audiences will naturally understand “around” to mean – as it does in the English language – encircling, on every side. However the anti-terrorist fence does not encircle Bethlehem – it is located to its north and west as can be seen on the UN-produced map below.”

The programme continues with a discussion with Professor Alan Johnson of BICOM and the rector of the church, Rev. Lucy Winkett. During the discussion Alan Johnson points out the reasons for the anti-terrorist fence’s construction, the fact that only a very small proportion of it is actually made of concrete and that it does not surround Bethlehem. However, later on Winkett makes the claim “but in Bethlehem it is a wall”, which is of course not an accurate portrayal and yet is not challenged by Stourton. On the map below, concrete sections of the anti-terrorist fence are marked with yellow and grey stripes whilst parts made of wire fencing appear in purple and the orange section represents road protection from sniper attacks.

Stourton makes no genuine attempt to unravel Winkett’s claim that the whole project was nothing more than an attempt to “support the people of Bethlehem”. He fails to clarify to listeners that what Winkett describes as “a request from the leaders of all the Christian denominations in the Holy Land [….] to support them and highlight their experience..” is in fact a very euphemistic way of describing the highly problematic Kairos document, as can be seen in photographs from the location in this article by Richard Millett.

No attempt whatsoever is made by Stourton to introduce the subject of the persecution of Christians in Bethlehem and other areas under the control of the Palestinian Authority by their fellow Palestinians – and the Church’s resounding silence on that issue.

He likewise makes no effort to inform listeners of the church’s partners in the costly project, which include well-known anti-Israel campaigners and NGOs, thus failing to challenge Winkett’s disingenuous negative answer to his question of whether the event aimed “to make a wider political point”. When Alan Johnson tries to raise the subject of the participation of extremist elements in the event, he is cut short by the presenter on the grounds that they are not present in the discussion.

Although views from both sides of the issue are presented in this programme, the fact is that Edward Stourton provided Ms Winkett with yet another platform from which to play down the real aims which lay behind ‘Bethlehem Unwrapped’, meaning that the random listener with no prior knowledge of the ‘festival’ and its anti-Israel political motivations (which would be the case with the majority of listeners) is left with a completely unrealistic and inaccurate impression of both the event and the anti-terrorist fence itself.