“The production team have been reminded of the importance of clearly summarising the standpoint of any interviewee where it is relevant and not immediately clear from their position or the title of their organisation.”

That statement was made by the BBC’s Editorial Complaints Unit just a few months ago as part of its ruling on a complaint.

As has been noted here on numerous occasions when the BBC has failed to make the affiliations of those interviewed and/or quoted clear, its editorial guidelines on impartiality do indeed state in section 4.4.14:

The January 7th edition of BBC Two’s flagship news programme ‘Newsnight’ included an item concerning the French government’s request to ban shows by the ‘comedian’ Dieudonne on the grounds of threat to public order. The programme can be seen here by those in the UK able to view BBC iPlayer, with the relevant section beginning from 38:00.

“According to BBC Newsnight […], this was principally a free speech issue. Jeremy Paxman introduced a report by saying:

“Now a French comedian has managed to short-circuit his country’s professed commitment to free speech. President Francois Holland, with support from both Right and Left, today encouraged local authorities to ban performances by Dieudonné M’bala-M’bala – usually known just as “Dieudonné”. It’s being done on grounds of public order because his alleged antisemitism has tested to destruction Voltaire’s supposed belief that ‘I disapprove of what you say, but I will defend to the death your right to say it.’ Before we talk about the limits of free speech, Hugh Schofield reports from Paris…” “

An audio version of Schofield’s report was also promoted on BBC radio and on social media, so those without access to iPlayer can hear it in this podcast or from 16:30 here in the January 7th edition of the BBC Radio 4 programme ‘The World Tonight’.

Following Schofield’s filmed report, ‘Newsnight’ moves on to an interview with one Alain Soral, who is introduced to BBC audiences by the programme’s presenter Jeremy Paxman as “the French writer and film-maker Alain Soral” (with the same description appearing on screen) and described as “a close friend of Monsieur Dieudonne” who “helped him popularise the infamous quenelle gesture”.

In fact, as noted here by the CST, Soral is a former member (until 2009) of the Front National in France with a long record of antisemitic statements and dubious connections. As Harry’s Place notes:

“He soon became notorious for campaigning alongside Dieudonné in his “Liste Anti-Sioniste” (LAS) [anti-Zionist list – ed.]  for the 2009 European elections. […] Soral is not just a friend of Dieudonné, but his Far Right political ally.”

Had viewers been informed of Soral’s background, they may of course have been able to put the statements he makes during the interview with Paxman into their correct context. But they were not, and instead Soral’s Far-Right affiliations and record of antisemitism are obscured by the fluffy description of him as a “writer and film-maker”.

The interview begins with Paxman (who curiously seems to have toned down his famous bulldog style of interviewing in this instance) telling audiences:

“I began by asking him what on earth it [the quenelle gesture] meant.”

Alain Soral: “It’s a gesture against the system, against the powers that be in France. It has only recently become – since it’s a gesture that’s been around for almost ten years – only recently the most powerful Jewish organization in France, the CRIF, decreed that it was an anti-Semitic gesture. So basically, their idea is that an anti-system gesture is an anti-Semitic one. So at the end of the day, is that simply an improper accusation? Or is there a deep link between the system of domination that Mr Dieudonne is fighting against and the organized Jewish community? Well that’s the question.”

Paxman: “But you don’t deny that Mr Dieudonne is an anti-Semite, do you?”

AS: “The problem is that this word has become a word used to scare people. A long time ago Dieudonne had a partner – a young Jew called Eli Simoun – but all of these accusations started arriving the day he did a sketch on Israeli settlers. So today we have a very powerful Zionist lobby in France which treats anyone who doesn’t subscribe to its vision of the world and to its politics as antisemitic.”

There is more, but readers have no doubt got the antisemitic conspiracy theory gist by now.

In fact, a photograph of Soral making the quenelle gesture at the Holocaust Memorial in Berlin appears in Hugh Schofield’s filmed report, but – as the CST notes – apparently no-one on the ‘Newsnight’ team was able to join the dots. 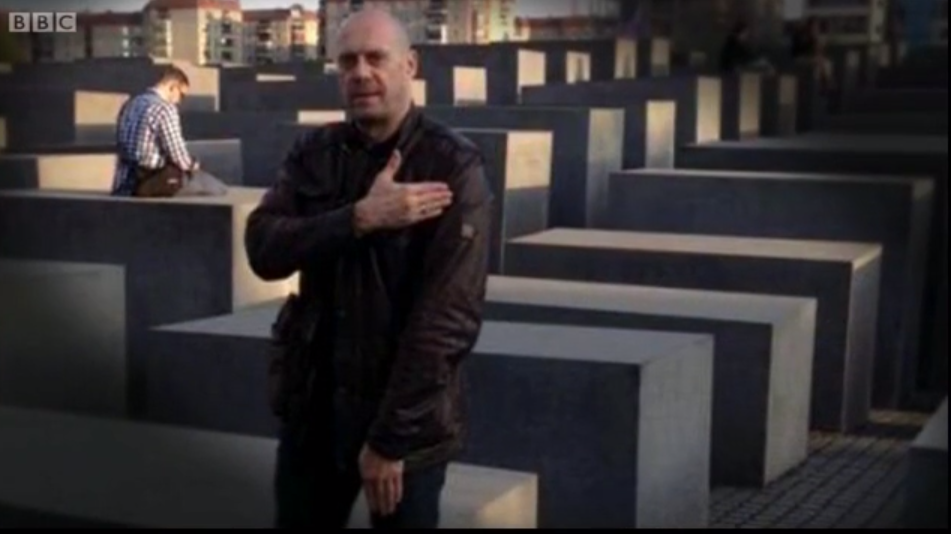 The fact that ‘Newsnight’ breached BBC editorial guidelines on impartiality by not informing audiences of Soral’s “particular viewpoint” is abundantly clear. What is less comprehensible is why in the first place the editor of the programme considered the airing of Soral’s antisemitic conspiracy theories to be of any contribution to the public’s understanding of the issue under discussion and why the BBC continues to be incapable of improving its increasingly dismal record on the reporting of antisemitism.