Among the considerable coverage of the Hamas-Fatah reconciliation deal which has appeared on the BBC News website’s Middle East page in the past few days was an article dated April 24th which was compiled by BBC Monitoring and is titled “Media divided over Palestinian unity deal“.

In that round-up of reactions to the deal in the Palestinian and Israeli press, the section dealing with the former ends with the following paragraph.

“The Jerusalem-based paper, Al-Quds, notes Washington’s expression of “disappointment” that the deal could seriously complicate peace talks, while Al-Hayat al-Jadidah says that Israel’s immediate reaction to the announcement was to bomb Gaza.” [emphasis added] 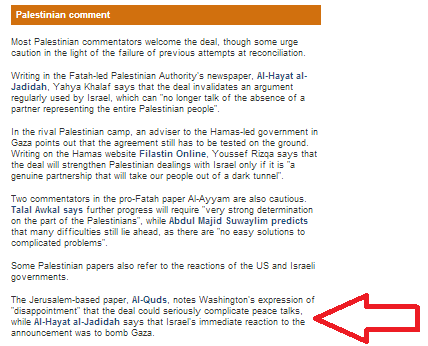 Israel of course did not “bomb Gaza” as a “reaction” to the announcement of the deal at all. What did happen – as even the BBC itself reported at the time – is that coincidently shortly after the deal was announced, a terrorist about to perpetrate a missile attack on Israeli civilians was targeted in the Beit Lahia area. Here is how BBC News reported the incident eventually:

Israel said it had targeted militants preparing to fire rockets. On Monday, seven rockets were launched from the territory into southern Israel.”

BBC Monitoring however makes no attempt to inform the readers of this report that the claim made by the Palestinian Authority mouthpiece Al-Hayat al-Jadidah is inaccurate both in terms of its suggestion that the incident was in “reaction” to the announcement of the deal and in terms of its misleading assertion regarding the scope of the incident: one man in Beit Lahia was attacked: not “Gaza”.

It is of course highly unfortunate that BBC Monitoring – with disturbing similarity to Al-Hayat al-Jadidah – appears to consider the unqualified amplification of misleading defamatory falsehoods promoted by the Palestinian Authority to be part of its repertoire.