The Telegraph informs us that:

“The government has ceased funding a British charity which sponsored events accused of promoting hatred and violence against Jews.

The Department for International Development (Dfid) said that it no longer supported War on Want, which helped pay for “Israeli Apartheid Week” in February this year. […]

War on Want, whose logo appears on publicity materials for Israeli Apartheid Week and the meeting, has received £260,000 in funding from Dfid over the last two years.

The subsidy is doubly embarrassing because the Government has recently banned local authorities and other public bodies from implementing boycotts of Israel.

A Dfid spokesman said last night that it has ceased funding of War on Want, apart from a small project with a distinct branch of the charity in Northern Ireland.”

As was reported here last year, this is not the first time that ‘War on Want’ has been active in the organisation of ‘Israel Apartheid Week’ in British universities and its activities include additional forms of anti-Israel campaigning. 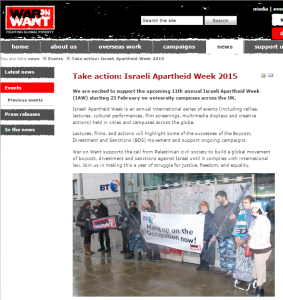 Among the other bodies funding ‘War on Want’ is the charity ‘Comic Relief‘ which – as has been noted here before – receives considerable support from the BBC. In addition, BBC Radio 4’s charity appeals slot has featured ‘War on Want’ on several occasions.

In light of the circumstances which prompted the decision taken by the Department for International Development, one would of course expect that ‘Comic Relief’ and additional funders of ‘War on Want’ will be reviewing their position.

That same background should of course also prompt the BBC to ensure that on the fairly frequent occasions upon which it hosts representatives of ‘War on Want’ on its programmes, care should be taken to meet the existing BBC editorial guidelines on impartiality which require that audiences be made aware of the association of contributors with a “particular viewpoint”.