Below is our regular end of month count of articles appearing on the Middle East page of the BBC News website according to the twenty-two countries and territories defined by the BBC as making up that region per the profiles on that page. 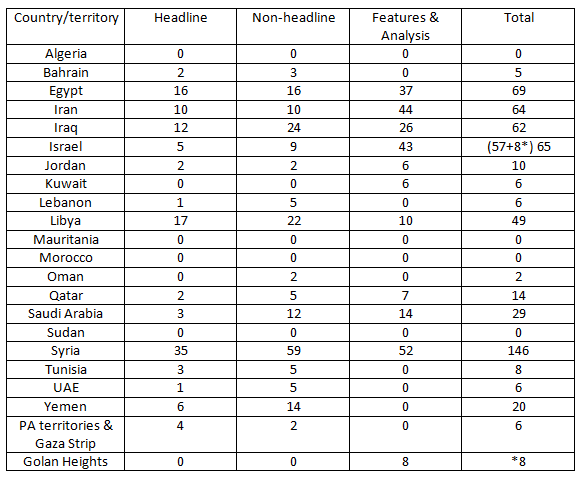 Syria once again received the most coverage throughout May, followed by Egypt – due in part to the presidential elections held there. Whilst the BBC categorises the Golan Heights separately from Israel in its listing of countries and territories making up the Middle East, the article concerning that area which appeared for eight consecutive days on the BBC News website relates to an Israeli perspective of the recent fighting along the Syrian side of parts of the border. If that article is added to the tally of other Israel-related content, Israel came third in terms of coverage, with Iran in fourth place (partly due to renewed talks with the P5+1) and Iraq – where elections were also held – in fifth place. Libya, beset by political upheaval and violence during May, came sixth in terms of coverage on the BBC News website’s Middle East page.

Throughout the last fifteen months, Israel has remained consistently among the five countries receiving the most coverage on the BBC News website’s Middle East page.

Like Loading...
Tags from the story
BBC, BBC News, BBC Online, Israel, Uncategorized
Written By
Hadar Sela
More from Hadar Sela
The BBC’s coverage of the terror attack in the Jerusalem neighbourhood of...
Read More