On June 17th the BBC News website published its fourth article about the search for three Israeli teenagers who were kidnapped last Thursday night on its Middle East page. The report is titled “Israel detains dozens more in search for missing teens” and after three opening sentences, two examples of ‘last-first’ reporting appear. 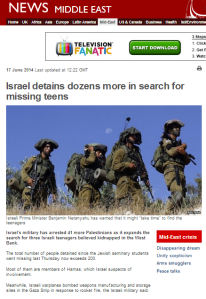 Soldiers also shot a Palestinian who tried to set fire to a fence surrounding a Jewish settlement in the West Bank, it added. Palestinian medics said he was being treated at a hospital in Ramallah.”

Both those incidents, along with numerous others, occurred the night before the publication of this report. A missile fired from the Gaza Strip landed near Ashkelon, fortunately without causing injury. The other incident mentioned by the BBC was actually an attempted infiltration of the village of Kochav Ya’akov by three Palestinians.

“The latest arrests took place in the northern West Bank city of Nablus.

Members of Palestinian Authority President Mahmoud Abbas’s Fatah faction were reportedly among those detained on Tuesday. Several were Palestinian security forces personnel who were previously active in a militant offshoot of Fatah, according to the Associated Press.”

Notably, the BBC refrains from informing audiences of the vast amounts of explosives, weapons and ammunition discovered during the searches in Nablus or that what it euphemistically terms “a militant offshoot of Fatah” – the Al Aqsa Martyrs Brigades – had earlier in the day issued a claim of responsibility for the kidnapping of Eyal Yifrach, Naftali Frankel and Gil-ad Sha’ar. Whilst it is not known whether that claim (like the other two which have appeared) is credible, it is nevertheless important context to the arrests which the BBC conceals from audiences.

The report goes on to describe Hebron as being “near” the Alon Shvut junction where the abductions took place, despite the fact that the two are some 27 kms apart. It neglects to inform readers that Hebron is one of Hamas’ main strongholds in the PA controlled territories.

Having earlier described the three teens as “believed kidnapped”, the report goes on to state:

“The Israeli authorities have blamed Hamas for the apparent abductions.” [emphasis added]

It then goes on to give an inaccurate description of Hamas’ designation as a terror organization and yet again (as was the case in previous BBC articles on the same topic) to promote to audiences the notion of equivalence between intelligence-based statements made by the government of a sovereign country and claims made by an internationally designated terrorist organization.

“The Islamist movement, which Israel regards as a terrorist group, has dismissed the accusation that it is involved as “stupid”. It has also said the detention of its members, including several leaders in the West Bank, “will not stop it and it will not change its path”.” [emphasis added]

The article ended by promoting speculation from anonymous sources.

“Commentators in Israeli media said Israel might be seeking to bring about the collapse of the newly formed Palestinian unity government, which is backed by Hamas, and weaken the Islamist movement ahead of the planned Palestinian presidential and legislative elections.”

A remarkably similar – but distinctly less coy – observation in an AFP article suggests that the BBC is actually referring to articles by Amos Harel in Ha’aretz and Alex Fishman in Yediot Aharonot. The BBC provides no facts or evidence to back up its amplification of second-hand speculations.

Interestingly though, reports which appeared in another Israeli media outlet did not appear to interest the BBC – presumably due to the fact that they fit in less well with the narrative it elects to promote.

“Following statements made Monday by a senior Palestinian official, who told The Times of Israel that if it was proved that Hamas was behind the kidnappings the PA would reevaluate the unity pact, the Palestinian government convened on Tuesday and decided that it would continue to refrain from paying the salaries of former Hamas government officials, some 40,000 in number.”

Five days and four BBC reports after this incident began, the BBC still has not informed its audiences of the celebrations and other expressions of support for the kidnappings on the Palestinian street, along with the inflammatory rhetoric from Hamas, the PA and Fatah. Clearly, BBC audiences cannot understand this particular “international issue” if they continue to be told only selected parts of the story.

Still no BBC reporting on Palestinian celebrations of kidnappings