BBC coverage of a hunger strike by Fatah prisoners fails to inform audiences of its real background.

As regular readers are aware, despite having offices in Jerusalem, Ramallah and Gaza the BBC does not devote much coverage to the topic of internal Palestinian politics. In particular, the story of internal Fatah power struggles is one that has been serially under-reported in recent months.

BBC’s Knell omits back stories in portrayal of PA succession

Abbas’ Fatah reelection ignored by the BBC – in English

BBC News ignores the story of the new Fatah vice-chair

That chronic lack of coverage means that BBC audiences are not well placed to understand the developing story of a pre-planned hunger strike by Fatah prisoners serving time in Israeli prisons.

As analyst Avi Issacharoff pointed out when it was announced earlier this month, while ostensibly about prison conditions, the hunger strike – led by convicted terrorist Marwan Barghouti – is actually rooted in the Fatah power struggle.

“Officially, the Barghouti-led prisoners’ move is in protest of what they see as the Israel Prison Service’s failure to meet their demands regarding an improvement of conditions in the detention centers.

The strike will be Barghouti’s most significant test since he entered prison some 15 years ago. […]

In the Fatah Central Committee’s leadership elections (the party’s most senior institution) in December, he won first place. His wife, Fadwa, took the top place in the movement’s Revolutionary Council elections (the party’s second most senior institution). He is ostensibly the movement’s undisputed leader, despite being behind bars.

However, Palestinian Authority President Mahmoud Abbas and his loyalists in the Fatah leadership have carried a series of steps to isolate and weaken him. Abbas did not appoint him as deputy chairman of Fatah, as Barghouti had expected, and other senior positions were divided between rivals Jibril Rajoub and Mahmoud al-Mottak.

Barghouti’s backers also failed to be elected to other spots in the Central Committee, and he’s realized that he has been slowly pushed out of the picture.

Forced from the halls of power, Barghouti is using the strike to signal to the PA with that he can still wield considerable power in the Palestinian street.”

The strike commenced on April 17th and at the time of writing is limited to just over a thousand of the Fatah-linked prisoners.

“The hunger strike initiated by jailed Fatah official Marwan Barghouti is expected to start Monday – to coincide with Palestinian “Prisoners Day,” an annual event held in solidarity with the more than 6,000 Palestinian security prisoners incarcerated in Israeli jails. Barghouti is currently serving five life sentences for his role in murderous terror attacks during the Second Intifada in the early 2000s.

With the annual event comes the concern of increased tensions in the prisons, and in the West Bank with Israeli security forces. Hamas, Fatah’s main rival, announced Sunday that its members will also join the strike, as did the Popular Front for the Liberation of Palestine (PFLP), another Palestinian faction. […]

Barghouti began to call for a strike after talks between prisoners’ representatives and the Israel Prison Service on improving prison conditions reached an impasse. Those talks began more than a year and a half ago. […]

Among the demands from Barghouti and the prisoners are the resumption of a second monthly visit by family members (a benefit that was cancelled by the International Committee of the Red Cross due to budget cuts), the prevention of family meetings being cancelled for security reasons, and the restoration of academic studies and matriculation exams to prisoners. Other demands include more television channels being available in cells and cell phones in security wings.

According to sources close to Barghouti, the gradual increase in prisoners joining the strike is a planned step intended to prevent it from breaking early. But some have said that the fact that only about half of the Fatah prisoners announced that they would join points to a disagreement over Barghouti’s measure.

Barghouti supporters are also planning parades and demonstrations in the West Bank in support of the strike.”

On April 17th the BBC produced coverage of the strike on various platforms.

Listeners to the BBC World Service radio programme ‘Newsday’ heard from the anonymous mother of an anonymous prisoner. A context-free clip from that programme was circulated on BBC social media accounts under the title “A mother’s plea for prison visitations” with the following synopsis:

“More than a thousand Palestinians held in Israeli prisons have begun a mass hunger strike against detention conditions. Rallies in support of the prisoners have been held in the occupied West Bank, and led to clashes with the Israeli security forces in the city of Bethlehem. The BBC spoke to the mother of a Palestinian inmate.” 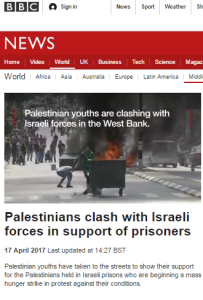 Viewers of BBC television news programmes saw a short filmed report which was also posted on the BBC News website under the title “Palestinians clash with Israeli forces in support of prisoners“. The background to the story was described as follows in that report:

“Palestinian youths are clashing with Israeli forces in the West Bank. They are out in support of more than 1,000 Palestinian prisoners who are on mass hunger strike against their detention conditions. There are fears that the protests could fuel tensions in the region.”

“More than 1,000 Palestinians held in Israeli jails have begun a mass hunger strike against detention conditions.”

The report does clarify that the hunger strike is led by Marwan Barghouti:

“The action is being led by Marwan Barghouti, a Palestinian leader jailed by Israel for life for five murders.

Barghouti has been touted as a possible future successor to Palestinian Authority President Mahmoud Abbas.”

However, like the other reports, the strike’s political background is entirely erased from this account of the story and instead audience attentions are focused on “detention conditions” without clarification of the specific demands.

Securing amplification from international media organisations is of course part of the strategy of the organisers behind this pre-planned action. If the BBC is going to collaborate with that strategy, it should at least be telling its audiences the whole story behind the motives for the strike.

The Myth of the Palestinian Mandela (The Tower)