As Israel was preparing for the funerals for the three murdered Israeli teenagers Naftali Frenkel, Gil-ad Sha’ar and Eyal Yifrach on the afternoon of July 1st, the BBC World Service Radio’s ‘Newshour’ programme saw fit to broadcast an interview with Isra Almodallal, described as “Director of Foreign Affairs at the Palestinian Government Information Office”. Readers may recall that the BBC Jerusalem Bureau’s Yolande Knell interviewed Ms Almodallal last November when she was appointed to the post of Hamas spokeswoman. 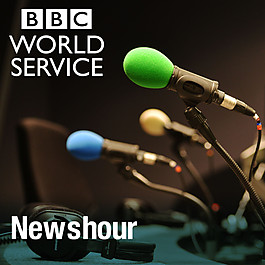 Titled “Palestinian government says Israel is looking for excuses to punish Hamas”, the interview is available here, although the sound quality is quite bad.
In the opening part of the interview, Almodallal promotes the line adopted by the PA in the first days after the teenagers were kidnapped, in which it claimed that it has nothing to do with an incident which took place in Area C. That claim of course conveniently side-steps the fact that the murderers set out from an area under the complete control of the Palestinian Authority, as Dr Dore Gold explained in an earlier BBC interview.

Isra Almodallal: “…and this is something very important to say: that what happened it was under the security Israeli authority and who and who did it we don’t know actually […] The Palestinian Authority has nothing to do with this and we have the problems enough and crisis to talk about.”

Failing to clarify to listeners that the murderers came from an area under PA control, the unidentified presenter then asks:

“Do you not feel that you have to respond in some way given what the Israeli government is saying?”

Almodallal then launches into an uninterrupted tirade of Hamas propaganda.

Did the presenter challenge any of Almodallal’s context-free propaganda or bother to correct the inaccurate impressions given to listeners? She did not.

Passing up on the opportunity to ask Ms Almodallal what the ‘technocratic’ unity government therefore has to say about the dozens of missile attacks on Israeli civilians executed over the last three weeks from the Gaza Strip which it now controls, the presenter goes on:

IA: “Well actually simply I can say that they cannot punish people and even movements. What they are doing and even they said that this was [unintelligible] Hamas. They’ve been just firing Gaza all night. And this is what we term as collective punishment. If they wanna punish Hamas this is something they cannot even do because Hamas has not announced doing. There is no any, you know, [unintelligible], any clear speeches and [unintelligible] that it says that it’s Hamas responsibility. So how can they? They just want…they want excuses to punish Hamas. This is what they are doing actually.”

Again, listeners are not informed that “firing Gaza all night” actually means Israeli responses to missile fire by terrorist organisations – including Hamas itself – on Israeli civilian targets and they are not alerted to Almodallal’s deliberately inaccurate use of the term “collective punishment”.
The presenter then asks Almodallal about an unverified claim of responsibility for the kidnappings and murders from a Jihadist group. After having twice asked “what group?” Almodallal says:

“I think that we have nothing to do about it. Israel did enough to punish the Palestinian people in Khalil city [Hebron] and all the West Bank and even Da’ash, this Islamic group, its responsibility it was from the Israeli resource.”

Earlier in the day the same BBC World Service programme had already presented listeners with a dose of unchallenged and uncorrected Hamas propaganda from Azzam Tamimi but clearly the editorial team at ‘Newshour’ did not consider that sufficient. Notably, yet again, this ‘interview’ was nothing more than a platform for the propagation of context-free inaccuracies and falsehoods which did nothing to contribute to the BBC’s obligation under the terms of its Charter to enhance its audience’s “awareness and understanding of international issues”.