One of several BBC journalists ‘parachuted in’ to the region recently in order to cover Operation Protective Shield is Paul Adams – usually based in London as a World Affairs correspondent. 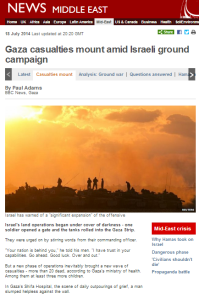 On July 18th the BBC News website published an article by Adams initially titled “Gaza casualties mount amid Israeli ground campaign” but later renamed “Hospital on Gaza conflict’s front line”. In his fourth paragraph Adams adheres to what has been standard BBC practice since the beginning of its reporting on this operation: the quotation and promotion of figures supplied by the Hamas-run health ministry in Gaza without any qualifying statement regarding the fact that they have not been independently verified by the BBC and with no attempt made to distinguish between civilian and combatant casualty figures.

“But a new phase of operations inevitably brought a new wave of casualties – more than 20 dead, according to Gaza’s ministry of health. Among them at least three more children.”

Depending on the time at which Adams wrote those words, he should of course have pointed out to BBC audiences that at least fourteen terrorists were among the casualties on the first day of Israel’s ground operation.
A considerable proportion of Adams’ report relates to the Wafa rehabilitation hospital in the Shuja’iyeh neighbourhood of Gaza City which, incidentally, also accommodated members of the International Solidarity Movement with the staff’s knowledge and consent, although Adams refrains from mentioning that fact.

“I found the patients and staff from the Wafa rehabilitation hospital sheltering in a Gaza City clinic.

The Wafa has been hit repeatedly in the past week. It’s close to the border and very close to some of the latest Israeli military activity.

Basman al-Ashi, the hospital’s executive director, said everything seemed quiet on Thursday night, until shelling intensified in the hours before troops entered the Gaza Strip.

With artillery rounds hitting the hospital once more, Basman decided to evacuate everyone.”


In fact, the hospital’s staff were directly alerted to the need to evacuate the premises by the IDF on the evening of July 15th –47 hours before the ground operation commenced – even according to B’Tselem.  General warnings were also issued to residents of that neighbourhood and others on the morning of July 16th. Contrary to the impression which readers receive from Adams’ report, the actual reason for the evacuation warning was the presence of terrorist infrastructure located near to the hospital.
Perhaps unwittingly, Adams provides evidence of the practice of locating weapons stores and missile launchers in the vicinity of medical facilities and other civilian structures when he goes on to write:

“As he recalled the scene, surrounded by his evacuated patients, two deafening salvoes of rockets took off from somewhere very close by – rockets fired by fighters from Hamas or one of the other armed factions.” [emphasis added]

No attempt is of course made by Adams to clarify to BBC audiences the legal significance of the practice he witnessed and he later goes on to deliberately mislead audiences by writing:

“Israel says rockets have been fired from Basman al-Ashi’s hospital, a charge his staff deny completely.”

Significantly, he does not ask the hospital’s director about the actual situation – i.e. that areas near the hospital have been used for the purposes of terrorism.
Adams does, however, take the opportunity to promote and amplify the hospital director’s use of a Nazi analogy. 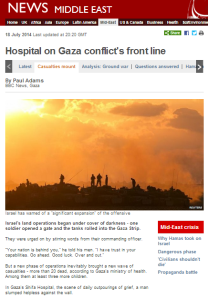 “Basman’s eyes closed for a moment in weary resignation, but opened wide in defiance when I suggested the actions of Hamas might simply make matters worse.

“It’s a very natural response for the Palestinians to respond, to defend themselves,” he insisted.

Israel, he said, had made “a concentration camp of 1.8 million people”.

“No air. No land. No sea. You’re trying to tell the people what? I’m putting you in prison and I want you to obey, eat, sleep and that’s it. We’re human.” ” [emphasis added]

One of the definitions of antisemitism according to the EUMC working definition is:

“Drawing comparisons of contemporary Israeli policy to that of the Nazis.”

Even if that is what an executive director of a Gaza hospital with close links to the ISM actually said, there is no justification and no excuse for the BBC’s amplification and propagation of Nazi analogies.
It would have been helpful to BBC audiences’ understanding of the reality of the situation had Adams bothered to explain to readers that – contrary to al Ashi’s inaccurate claim – Israeli policy concerning the Gaza Strip is the result of the terrorism perpetrated by Hamas and other groups rather than the other way round. However, it is perfectly clear that Paul Adams did not set out in this article to provide BBC audiences with accurate and impartial information which really would enhance their “understanding of international issues“.