The BBC misrepresents a statement by the Syrian foreign ministry.

The recently released report by the Organization for the Prohibition of Chemical Weapons -UN Joint Investigative Mechanism (JIM) concerning the chemical weapons attack in April in Khan Sheikhoun was of course covered by many media organisations.

Once again many Western outlets (e.g. Reuters, NYT, Guardian, Telegraph) managed to strike an appropriate balance between portraying the report’s findings and putting the related denials of the Assad regime and its Russian patrons into appropriate perspective.

However, the BBC News website’s October 27th report on that story – “Assad forces behind deadly Syria sarin attack – UN” – yet again displayed false balance with its extensive promotion of responses from those sources. 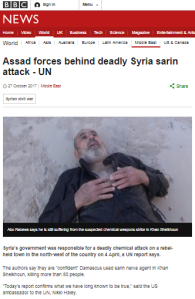 “However, Syria’s foreign ministry said on Friday it “categorically denies” the report’s conclusions.

“This report and the one that preceded it are falsifications of the truth and distort the exact information on what happened at Khan Sheikhun,” the statement said.

The ministry went on to accuse the report of being a tool with which the UN could “exert more political pressures”, according to news agency AFP.

Syria’s opposition and Western powers have blamed the incident on a government air strike on the area, but Syrian President Bashar al-Assad and his ally Russia have repeatedly said the incident was fabricated.

The BBC did not provide a link to the AFP report from which it ostensibly quoted the highlighted statement above but one of AFP’s articles on the story includes the following:

“”Syria categorically denies the content of the joint report between the UN and the Organisation for the Prohibition of Chemical Weapons,” a foreign ministry statement said.

“This report and the one that preceded it are falsifications of the truth and distort the exact information on what happened at Khan Sheikhun.” […]

The Syrian statement, quoted by official media, denounced the “method of investigation”, saying it was based on “the words of the criminals who committed this immoral act in Khan Sheikhun and on dubious witnesses”.

The ministry said the UN report was written on the basis of “instructions from the US administration and Western countries to exert more political pressure” on Damascus.”

A look at the report put out by the Syrian Ministry of Information linked state media organisation SANA confirms that the Assad regime is in fact claiming that the report’s findings were dictated in advance by “Western countries”. [emphasis added]

“Syria rejected the report of the UN and the Organization for the Prohibition of Chemical Weapons (OPCW) Joint Investigative Mechanism (JIM), which was announced yesterday, stressing that it came in implementation of the instructions of the US administration and Western countries to exert more political pressures and threats to Syria’s sovereignty. […]

The source said that since the establishment of this mechanism, Syria has repeatedly expressed that the Joint Investigative Mechanism needs to carry out its work in a professional and impartial manner and that if its reports were prepared in advance by the Western intelligence services then its work would be ineffective, noting that the manner of its investigative procedures showed the dominance of Western countries over it.”

Moreover, the Assad regime goes on to accuse some Western countries of supporting “the terrorist parties” that it alleges were in fact responsible for the chemical weapons attack in Khan Sheikhoun.

“The source asserted that Syria has cooperated with the UN-OPCW mechanism and did not delay or hesitate to work with them in various fields, including providing accurate information required to show the fact that the terrorist parties had used chemical weapons directly and indirectly and are supported by parties in the region and beyond, particularly the US, France, and Britain, and their tools in the region such as Saudi Arabia, Qatar, Turkey, and other countries.”

This of course is far from the first time that BBC audiences have seen amplification of unchallenged Syrian propaganda that is presumably intended to tick the ‘impartiality’ box and give an impression of ‘balanced’ reporting. This time, however, that propaganda was apparently too ridiculous even for the BBC and so it was toned down and distorted into an inaccurate representation of the Syrian Foreign Ministry statement.

Why does the BBC describe the Khan Sheikhoun chemical attack as ‘suspected’?

Are BBC audiences getting the full picture on Syria’s chemical weapons?