These are just a handful of over 70 antisemitic incidents reported to CST since the beginning of July. This is roughly double the number we would expect to be reported during this period under ‘normal’ circumstances. Approximately ten of these incidents have involved violence. Approximately 14 have involved the use of social media.
Roughly two-thirds of the incidents reported since 1 July have been related to the ongoing conflict between Israel and Gaza, and the number of incidents reported to CST has escalated since the beginning of Israel’s operation in Gaza on 8 July.
Another disturbing factor is that the proportion of antisemitic incident perpetrators described to CST as being of south Asian appearance has been much higher during this period than is normally the case. Antisemitism in Muslim communities is something that others have written about before; the incidents reported to CST suggest that it is playing a significant role in the high level of antisemitic incidents currently being reported. In these circumstances, last week’s statement from the Muslim Council of Britain warning against such behaviour was most welcome.
There have also been several examples of antisemitic incitement on anti-Israel demonstrations and on social media since the conflict between Israel and Gaza began. Last week the hashtag #HitlerWasRight trended on Twitter worldwide. One protestor took this theme onto an anti-Israel demonstration in London: 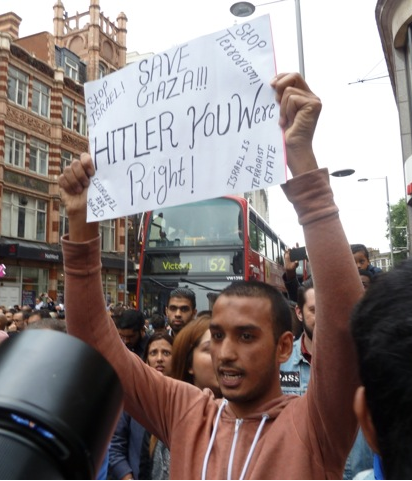 It should be noted that the antisemitic incidents recorded by CST since 1 July do not include antisemitic placards or chants on demonstrations.
Other protestors have used Nazi imagery to abuse Israel:

Comparing Israel to Nazi Germany is antisemitic. It abuses the memory of Holocaust victims and offends contemporary Jews. It attacks Israel on the basis of its Jewishness. It should have no part in pro-Palestinian campaigning.
This flag commits the same offence, and compounds it by using a Star of David next to the phrase “Baby Killers”. The Star of David is a Jewish symbol. It is found on the Israeli flag, but it is also found on synagogues all over the UK. To use it in the manner it is displayed on this flag risks inciting hatred against British Jews.

This incitement has also been seen on social media. This cartoon is from the Facebook page of UK Hizb ut-Tahrir spokesman Taji Mustafa. it evokes the antisemitic blood libel, in which Jews are accused of murdering non-Jewish children and consuming their blood in religious rituals. The Arabic on the knife reads “Arab silence”, but the person holding the knife bears a Star of David. The Stars and Stripes on the fork also suggests an antisemitic conspiracy theory regarding alleged Jewish control of America.

CST has also received several reports of antisemitism on Twitter. These two tweets are clear examples of incitement against Jews in the Stamford Hill area of north London:

It has been suggested by some people that hate and abuse on social media is not as serious as other forms of hate crime and should not be included in hate crime statistics. We do not agree. Firstly, if a victim considers a tweet to be offensive or threatening enough to report it to CST, we will respect their feelings and their reaction to what they have seen. Secondly, if somebody shouts an antisemitic comment at a Jewish person in the street, it may only be heard by one person; if that same comment is put on Twitter, it can be seen by an unlimited number of people and it has a permanent record.
This pattern of antisemitic incidents in relation to the current conflict in Israel and Gaza is replicated in several countries around the world, most notably in France where Jewish shops and synagogues in Sarcelles were attacked last night. The antisemitic incidents and incitement seen in Britain over the past two weeks suggest that this danger is getting more, not less, acute. There should be zero tolerance within pro-Palestinian groups, and wider society, for anybody who targets Jews in word or deed.