We first noticed commenter ‘Eileen Kuch’ on a ‘Comment is Free’ thread about the Ukrainian-Russian crisis in April, where she vehemently supported Russia’s intervention in Ukraine.

This comment, putting aside the “Zio-controlled” trope (that can be explained off as some kind of anti-Zionism – she didn’t write “Jewish controlled”; did she?), reminded us of a crazy conspiracy theory – on some completely off the mental spectrum website – alleging that Barack Obama’s stepfather Lolo Soetoro must have been Jewish because “soetoro” is a Hebrew word used in the Hebrew Bible.
We were mildly surprised that the Guardian allowed such a bizarre claim on their site, and, wishing to understand the very generous flexibility of the moderators, searched for her other comments.
Reading her writings taken from her public profile on CIF is a beautiful example of the level of racist hate speech that the World’s Leading Liberal Voice is evidently ready to tolerate, completely disregarding their own ‘community standards’. Here are a limited number of examples of her comments, along with the ‘source’ of her knowledge.
Israel and its puppet the USA are the instigators of all ongoing unrest and upheaval in the world:

Her suggested useful reference on the mass murder of “Christians” by the hands of Lenin and Trotsky is a book of a certain Estonian author – Juri Lina – titled ‘Under the Sign of the Scorpion‘. To illustrate what she considers ‘an important source’, we will only quote the well-known neo-Nazi and conspiracy theorist Henry Makow:

Estonian journalist Juri Lina has examined the recently opened Soviet archives and documented the connection between the Bolshevik Revolution and Jewish Illuminism in his book “Under the Sign of the Scorpion.” (1994)
I will probably devote a separate column to this book. Suffice to say here that Communism was the outcome of the plan outlined in Protocols. No wonder this book was banned in the USSR on pain of death! Its informal ban in America is a measure of our condition.
Karl Marx, Lenin and Trotsky, were all Jewish Freemasons, dysfunctional losers who were employed by the Illuminist bankers to hoodwink the masses. Lenin for example had been an unsuccessful lawyer who had only six cases in which he defended shoplifters. He lost all six cases. A week later he gave up the law to become a highly paid revolutionary.

Ms Kuch can’t be fooled; she knows the real name of the players in Ukraine:

For the sake of less informed readers who are not familiar with the latest antisemitic hate literature – Petro Poroshenko – the new Ukrainian premier is rumored to be a Jew; Valtzman is the original name of his father, who preferred to use his wife’s maiden name – Poroshenko.
Ms. Kuch knows everything about the Pollard affair too:

Who controls the new Ukrainian government?

Ms Kuch casually calls the president of the US Obongo, a sobriquet used exclusively by white supremacists whose problem with Obama is the color of his skin.

She passionately reacts to a post alleging Putin’s responsibility in the Ukrainian crisis (the article she commented on has no connection to Zionism, Israel or the Middle East at all.)

She responds to a post arguing that Jewish citizens of the US have a right to lobby for their interests – as they are American citizens after all.

The start of the disintegration of the ‘anti-Zionist’ mask.

I guess Obozo is Obama, Kohn assigned to Kerry and Nudelman must be Victoria Nuland, but I might be mistaken.
The credo of the anti-imperialist anti-Zionist:

And a last pearl of fiscal wisdom:

Scrolling through her Facebook page postings, she seems to be a reasonably decent activist for the environment, and an active member of the American peace-camp. She signed and shared many petitions lobbying for environmental cases, voiced her dislike of US military, economic and political interventions in world affairs, and supports the rights of US veterans for better healthcare. Some may consider her openly declared admiration of Vladimir Putin a disturbing factor, but without reading further this can be considered a minor distraction by a peace-loving and slightly misinformed person – until you arrive to this comment she made on an article published by the well-known antisemitic hate-site Veterans Today.

A look at her anti-Zionist fellow travelers, commenting at another website: 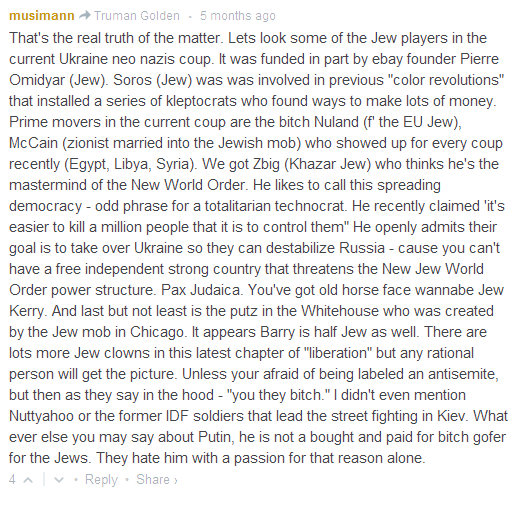 And finally Ms Kuch (the ultimate anti-Zionist) learns something from a Syrian TV production playing on Jordanian TV promoting the Protocols of the Elders of Zion: (link16)

The Guardian must be proud. None of her above mentioned comments have been deleted at the time of the publication of this article.

0 replies on “Focus below the line: Profile of 'anti-Zionist' Guardian commenter Eileen Kuch”