On July 31st the BBC World Service radio presenter Rebecca Kesby made the following remark during an interview with an Israeli politician:

“But what the Americans and others across the world are seeing on their television screens are dead civilians and they’re seeing your artillery hitting schools and hospitals and the power supply and people see that as collective punishment against the Palestinians.”

Of course what people “across the world” were “seeing on their television screens” throughout the months of July and August this year was dictated by what media organisations decided they should – or should not –see.

Over the next few days we will be taking a look at the BBC News website’s coverage of Operation Protective Edge and examining the corporation’s claims of equal coverage of the two sides of the story.

Content on the BBC News website included written news reports and written ‘Features and Analysis’ articles as well as filmed items presented as stand-alone reports and additionally often embedded into written articles. Those filmed items also appeared on BBC television news programmes and hence give us an idea of what worldwide audiences were indeed “seeing on their television screens” – as well as what they were not seeing.

In part one of this analysis we will look at the content appearing on the BBC News website’s Middle East page during the first ten days of Operation Protective Edge: from its commencement on July 8th until the beginning of the ground operation on July 17th. A small amount of content which appeared on the BBC News website at the time has since become unavailable but below are the vast majority of the reports offered to the website’s visitors. We are not including here the many reports concerning demonstrations relating to the conflict in Europe and elsewhere which appeared on the Middle East page: that topic will be covered separately.

Notably, the BBC’s second written article on the very first day of the operation already promoted Hamas claims of Israeli ‘war crimes’; a theme which was to be repeated in the days to come. Also notable was Yolande Knell’s promotion of the inaccurate notion that shortages of medical supplies in the Gaza Strip were attributable to border restrictions imposed by Israel. That obviously pre-existing theme was frequently promoted in subsequent BBC coverage.

Where are Gaza militants firing rockets?   James Reynolds in Israel

Day two of the operation saw further promotion of the notion of ‘war crimes’ in the day’s first written article along with amplification in both that item and a filmed report by Yolande Knell of the false claim made by a political NGO engaged in lawfare against Israel that Israeli forces were deliberately targeting civilians in the Gaza Strip. The topic of Hamas’ use of human shields – already evident by this stage – was ignored in both written and filmed reports.

On July 10th BBC audiences heard amplification of claims of ‘collective punishment’ of the civilian population of the Gaza Strip. The practice of unqualified promotion of casualty figures supplied by Hamas sources (but not verified by the BBC) was evident and continued to be so throughout the conflict. No effort was made by the BBC to establish the number of combatant casualties and the issue of Hamas’ use of human shields – including directives issued by Hamas officials to the public – continued to be ignored. 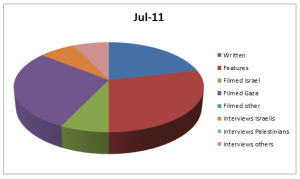 Gaza-Israel conflict: What can Israel and Hamas gain?  Kevin Connolly

Gaza-Israel conflict: ‘It’s not worth living’

The BBC continued to report casualty figures supplied by Hamas or Hamas-linked sources with no effort made either to inform audiences of the motives of the sources, to verify those figures or to determine the civilian to combatant ratio. Notably, within hours of Jeremy Bowen’s arrival in the Gaza Strip on July 11th he was already promoting the concept that “there’s serious doubt Israel is complying with the laws of war that protect civilians” and claiming that Israel had “serious questions” to answer. Bowen also began the promotion of UN casualty figures, but failed to inform audiences of the sources of those statistics. 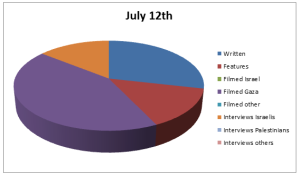 One of the notable themes appearing on this day (as well as in subsequent BBC coverage) was the depiction of the missiles used by terrorists in the Gaza Strip as “homemade rockets“.

Again, the topic of Hamas’ use of human shields and directives issued by Hamas officials instructing civilians to stay in their homes despite Israeli warnings was absent from the emotive coverage of the conflict’s impact on the civilian population of the Gaza Strip.

Features: Life in the Gaza Strip (updated version of a feature originally published in 2012)

July 14th saw not only continuation of the BBC policy of ignoring Hamas’ use of human shields, but active denial of that policy on the part of Jeremy Bowen.  In addition, Bowen continued to promote claims of Israeli ‘war crimes’ and ‘crimes against humanity’ made by the head of a political NGO engaged in anti-Israel lawfare. 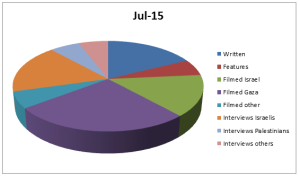 Features: Hamas and Israel step up cyber battle for hearts and minds

Israel spokesman: Hamas threw away chance of a ceasefire  interview with Mark Regev

‘Essentials, not luxuries’ being bought in Gaza  Yolande Knell in Gaza (discussed here)

The issue of Hamas’ use of human shields continued to be ignored, despite visual documentation of the practice by the BBC. The topic of “tight border restrictions” was again promoted without provision of the context necessary for BBC audiences to comprehend why those restrictions came about and their roots in Hamas terrorism. Unqualified promotion of Hamas-supplied casualty figures continued.

By this stage the BBC’s promotion and amplification of the PR messaging of political NGOs had been extended to include B’Tselem as well as the PCHR and UN OCHA. 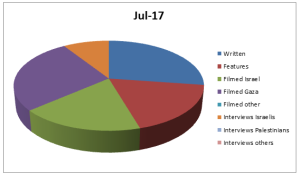 Notable in the second written article on this day was the disappearance of Hamas’ breach of a ceasefire and the downplaying of the cross-border infiltration into Israel by Hamas terrorists which made a ground operation inevitable.

Between July 8th and July 17th the predominant type of content presented to visitors to the BBC News website’s Middle East page was filmed reports from the Gaza Strip, with the majority of those items concentrating on what can only be described as emotive coverage of the conflict’s impact on civilians. Hamas spokesmen were interviewed on just two occasions (in contrast with four times as many interviews or footage from press conferences with Israelis) meaning that the focus of BBC reporting remained on the civilian population of the Gaza Strip. The total number of filmed reports describing the situation in Gaza during those first ten days of the conflict was more than double the number of filmed reports describing the situation in Israel.

Within the first few days of BBC coverage of the conflict, certain themes became apparent. Just hours after the operation commenced the BBC had already introduced the topic of ‘war crimes’ into its coverage and that theme and similar ones such as ‘crimes against humanity’ continued to be promoted; particularly by means of generous amplification of the messaging of selected political NGOs. The speed with which the BBC adopted that theme – along with the lack of any attempt to provide factual evidence that the use of such terminology was justified – does not encourage the belief that the corporation’s foreign correspondents arrived in the Gaza Strip free of preconceived political views.

An additional theme promoted right from the start of BBC coverage of the conflict was that of the supposed deliberate targeting of civilians by Israel – described on numerous occasions in the Hamas-style terminology ‘collective punishment’. Whilst BBC audiences were shown ample footage and images of destruction and casualties in the Gaza Strip (including graphic filmed reports from hospitals and morgues) the subject of Hamas’ use of the local civilian population as human shields was ignored and even denied.  Also noticeable was the BBC’s failure to carry out any discernible independent verification of the casualty figures and ratios supplied by Hamas and Hamas-linked sources, yet unquestioningly and vigorously amplified by the BBC.

Whilst BBC compliance with Hamas restrictions placed on the foreign media throughout the conflict (for example, refraining from filming Hamas terror operatives) was all too apparent to those with additional sources of knowledge and information, general audiences were not informed of that factor either during the conflict or since (in contrast, for example, to BBC statements concerning restrictions on reporting in Iraq in 2003) meaning that they would naturally conclude that all BBC content presented a freely reported, accurate and impartial picture of the situation on the ground upon which they could rely as a source of knowledge and understanding and use to reach informed judgements on the issue.

The BBC’s adherence to Hamas messaging, its advancement of pre-existing politicised themes and its heavy focus on the promotion of context-free emotive images of civilian suffering in the Gaza Strip meant, however, that the story was being framed in a very specific way already from the opening hours and days of coverage.