The real story behind the August 26th ceasefire between Israel and Hamas is of course the fact that Hamas could have accepted the same terms six weeks earlier and thereby prevented hundreds of deaths, thousands of injuries, extensive damage to buildings and infrastructure and unquantifiable suffering for the people of the Gaza Strip.

Hamas however refused to accept the Egyptian-offered terms at the time, insisting that there would be no ceasefire until its demands were met. The BBC – as we know – took it upon itself to extensively and energetically publicise and promote Hamas’ unrealistic demands concerning the lifting of border restrictions but consistently refrained from providing audiences with accurate information regarding the nature of the restrictions themselves and the reasons why they had to be imposed in the first place, thus denying them the ability to appreciate why that particular Hamas pre-condition to a ceasefire would not come about.

Six weeks and much avoidable civilian suffering on, Hamas jettisoned those preconditions and agreed to a truce without any of them having been met as Avi Issacharoff explains.

“Hamas’s defeat lies in the area it counts as most important. With all due respect to the international community, or to al-Jazeera which emerged as the Hamas propaganda arm, what interests Hamas is public opinion in Gaza and in the West Bank. Time and again its leaders — including military wing chief Muhammad Deif, of whom it is not clear what remains after the IDF airstrike that targeted his home — bragged and made promises to the Gaza public that this conflict would continue until the siege was lifted. And until the re-arrested prisoners from the Shalit deal were released. And until an airport was opened. In their enthusiasm for these causes, they cost hundreds of thousands of Palestinians their homes. Two thousand, one hundred and forty-four men, women and children who were killed in a war that they were assured by Hamas simply had to continue until those goals were achieved. The Hamas leadership swore that without a seaport (getting the Rafah border crossing reopened was not deemed a sufficient achievement because it is controlled by the Egyptians) the rockets would continue to fall on Sderot and Tel Aviv, Ashkelon and Netivot.

Hamas further promised that there would be no return to the understandings that ended Operation Pillar of Defense in 2012 or to the realities of recent years. Time after time, for almost 50 days, they rejected the Egyptian initiative, which included, almost clause for clause, the elements of the 2012 agreement.

And then, on Tuesday afternoon, when first word of the ceasefire began to emerge, it became clear that Hamas had capitulated, retreated with its tail between its legs, abandoned everything it had insisted upon. No seaport and no airport. No release of the Shalit prisoners who were re-arrested in June after the murders of the three Israeli teens. No lifting of the blockade.”

The significance was clear even to journalists at the New York Times:

“Hamas, the militant Islamist faction that dominates Gaza, declared victory even though it had abandoned most of its demands, ultimately accepting an Egyptian-brokered deal that differs little from one proffered on the battle’s seventh day. In effect, the deal put both sides back where they were at the end of eight days of fighting in 2012, with terms that called for easing but not lifting Israeli restrictions on travel, trade and fishing in Gaza.”

But have those important points been conveyed to BBC audiences in the corporation’s coverage of the August 26th ceasefire? The BBC News website’s main article on the subject ran under the headline “Gaza conflict: Israel and Palestinians agree long-term truce” and it was amended numerous times until its final version was reached. At no point is it made sufficiently clear to readers that the terms of the agreement are the same as those offered after the first week’s fighting or that Hamas abandoned its preconditions – including those still being promoted by the BBC in the sidebar of ‘related articles’ links. The only hint of the latter point comes in an insert of ‘analysis’ from Kevin Connolly.

“There have been small celebrations in the streets of Gaza City hailing a “victory” but the truth is that Hamas has not achieved the headline-making concessions it was demanding in return for a ceasefire agreement.

So, there is no deal on the opening of a sea terminal or an airport at this stage. How ordinary Palestinians view the deal probably depends on how quickly their tightly-controlled borders are opened and how wide.”

Whilst the article fails to clarify to readers that the suffering of residents of the Gaza Strip could have been dramatically and significantly reduced had it not taken Hamas six weeks to abandon its unrealistic demands, it does include amplification of the Hamas narrative.

“Hamas said the deal represented a “victory for the resistance”. “

“A spokesman for Hamas, which controls Gaza, said: “We are here today to declare the victory of the resistance, the victory of Gaza, with the help of God, and the steadfastness of our people and the noble resistance.” “

“The announcement was greeted by celebratory gunfire on the streets of Gaza City.”

It fails to inform readers that a 19 year-old girl – Randa Nemer – was killed and 45 others injured by that “celebratory gunfire”.

The later version of the report briefly notes that two Israelis were killed around an hour before the ceasefire came into effect, but once again father of five Zevik Etzion and father of three Shachar Melamed of Kibbutz Nirim are not named.

BBC television audiences saw two reports from Quentin Sommerville on the evening of August 26th. The earlier one – which also appeared on the BBC News website under the title “Gaza conflict: Israel and Palestinians agree new truce” – tells viewers nothing about the fact that Hamas abandoned its preconditions and settled for what it could have had six weeks earlier.

Moreover, in Sommerville’s second report of the evening (“Gaza conflict: Israel and Palestinians agree long-term truce“), which one can conclude was produced after more details of the terms of the ceasefire had come to light, he not only neglects to mention the above points but misleads audiences with regard to those terms.

“After fifty days of conflict – fifty days of loss – the streets of Gaza came alive tonight. It was a fight that cost two thousand lives but here they’re calling it a victory. There have been other ceasefires – eight in total – but it hasn’t brought people out onto the streets like this. They’re celebrating tonight because they believe that the fighting is over, that Israel’s blockade of Gaza has ended.” [emphasis added]

Later on in the report viewers are shown footage of Mahmoud Abbas saying that the agreement secured includes “providing Gaza with foodstuff and supplies”. No attempt is made to clarify to viewers that food, medicines and essential supplies have continued to enter the Gaza Strip via the Kerem Shalom crossing throughout the 50 days of conflict: 5,359 truckloads between July 8th and August 25th to be precise. 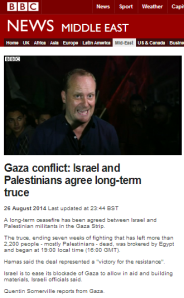 Against a background of footage of a missile hit on a kindergarten in Ashdod – which fortunately was empty at the time because the school year has not yet begun and the teacher preparing for the new term had left ten minutes earlier – Sommerville informs viewers of the obvious:

“Israel says that Hamas rockets have to stop if this truce is to work. This one landed today in a playground. No-one was hurt.”

Oddly, the fact that two members of Kibbutz Nirim were killed in a mortar attack earlier in the day is not mentioned.

On the afternoon of August 27th an article by Kevin Connolly appeared on the BBC News website under the title “Indecisive end to Gaza conflict“. There readers were informed that:

“Gaza does not function as a democracy so Hamas does not have to worry about immediate accountability to its own people, but many will question its judgement on two key points.

One is the decision to embark on a conflict when the agreement ending it only guarantees the restoration of the status quo that went before, together with commitments to discuss other grievances.

The other is the tactic of insisting on huge, headline-grabbing concessions (like the construction of a seaport in Gaza) in return for merely agreeing to enter talks.

It seems possible that that tactic made it harder to secure a ceasefire.”

Unfortunately, Connolly’s use of understatement and the fact that the BBC has throughout the past seven weeks consistently failed to adequately explain the important topic of the implementation of border restrictions and the naval blockade as a means of curbing the smuggling of weapons into the Gaza Strip mean that many readers are likely to remain unclear as regards the fact that the same ceasefire could have been accepted by Hamas six weeks previously and the extent to which Hamas’ tactics have caused unnecessary suffering to the people of the Gaza Strip.