Two weeks and two days after the first of the recent terror attacks in Jerusalem the BBC News website published a backgrounder article by Yolande Knell in the ‘Features & Analysis’ section of its Middle East page on November 7th under the title “Jerusalem a city on edge as tensions spiral“. Readers were told at the top of the article that:

Predictably, the article adopts the standard BBC practices of erasing all history before June 1967 and falling short of BBC editorial guidelines on impartiality by failing to inform audiences of the existence of the many legal opinions which fall outside the BBC’s chosen narrative.

“Israel has occupied East Jerusalem since capturing it from Jordan in the 1967 Middle East war. It annexed the sector in 1980 in a move not recognised internationally.”

“The settlements on occupied land are considered illegal under international law, though Israel disputes this.”

Knell’s article provides BBC audiences with a range of ‘explanations’ for the surge of Palestinian violence in Jerusalem.

“He was the spark that lit this uprising. Now we’re facing a lot of problems with the [Israeli] Occupation and having the Israeli border police next to our home only makes matters worse,” says Mr Abu Khdeir. “Anger is rising.”

“[Palestinians] blame increasing tension on the growing number of Jewish settlers moving to the area.”

“Recent clashes have been fuelled by Jewish demands to lift a ban on their religious practices at Jerusalem’s most sensitive holy site in the heart of the Old City.”

“At the al-Aqsa mosque compound, age restrictions continue to be imposed on Palestinian worshippers heading to Friday prayers, a move described by Israeli authorities as a security measure.”

“In the absence of peace talks to address the core issues, there are many reminders that the political vacuum can quickly be filled by violence.”

Those last two points were also promoted in a filmed report by Knell published on the same day under the title “Growing tension at Jerusalem holy site“. In that report – also shown on BBC television news – audiences were told:

“Tensions have been mounting over restrictions at this site – holy to Muslims and Jews. Today Israeli police lined up around the Old City to impose restrictions on Palestinian Muslims heading to the Al Aqsa Mosque. They said this was for security.”

“Recently there have been fresh reminders of how the political vacuum can be filled with violence. On Wednesday a Palestinian militant from Hamas drove into pedestrians, killing two people. It was the second such attack in Jerusalem in two weeks.” 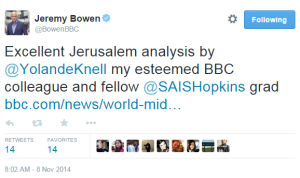 However neatly the notion that recent violence in Jerusalem and elsewhere is fuelled by a lack of negotiations may fit into the BBC’s narrative, there is one blatantly obvious hole in Knell’s “excellent Jerusalem analysis” as it was dubbed by her Middle East editor. No amount of ‘peace talks’ or political process would have dissuaded Hamas or the PIJ from carrying out the recent terror attacks or inciting violent riots because those terrorist organisations are inherently opposed to any kind of political negotiation with Israel.

Of course those of us with apparently better memories than Yolande Knell also remember the spate of terrorism which followed the signing of the Oslo Accords, not to mention the initiation of the second Intifada by the Palestinian Authority as a means of bringing political process to an abrupt end.

The last round of talks (July 29th 2013 to April 29th 2014) was no different: the statistics show that during the nine months of negotiations a rise in terrorism was seen in Jerusalem and Judea & Samaria (consistently under-reported by the BBC) rather than the opposite – as Knell’s redundant theory would have it.

Notably though, Knell’s article refrains from making any mention whatsoever of the issue of incitement and glorification of terrorism by the Palestinian Authority: major contributing factors to the recent violence, terror and unrest seen in Jerusalem and elsewhere.

Truly “excellent Jerusalem analysis” genuinely intended to inform audiences of the background to this particular issue would of course not have omitted that all-important factor. The advancement of a politically-motivated narrative, however, would.