Over the past few weeks BBC audiences have been misled with regard to the issue of Arab Jerusalemites and Israeli citizenship on several occasions.

“…Palestinians in East Jerusalem are considered to be residents of Israel – not citizens of Israel – and they do feel very isolated, very disenfranchised….”

On November 26th visitors to the BBC News website were told in an article titled “Israel revokes residency of Jerusalem attacker’s widow” that: 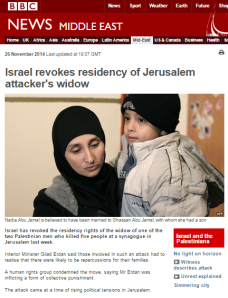 “The two Palestinians, who were shot dead at the Kehilat Bnai Torah synagogue after killing four rabbis and a police officer, were cousins from occupied Arab East Jerusalem.

Uday and Ghassan Abu Jamal were therefore entitled under Israeli government regulations to residency rights, although not to citizenship, says the BBC’s Kevin Connolly.”

The Abu Jamal cousins lived in Jabel Mukaber: a district located within the Jerusalem municipality. Contrary to Connolly’s assertion, they were therefore entitled to apply for Israeli citizenship like any other resident of the areas of Jerusalem which came under Israeli control in 1967. If they chose not to exercise that entitlement, they would still remain permanent residents with the right to vote in municipal elections and to receive the same social security benefits, education, pensions and healthcare as any other Israeli. Regardless of whether or not they hold Israeli citizenship, Arab residents of Jerusalem have a blue ID card of the same format as any other Israeli citizen – not “an East Jerusalem ID” as was claimed in the Radio 4 programme – with the exception being that those who have chosen not to take Israeli citizenship would have the nationality clause left blank.

This is not a complicated issue but as we see, the BBC repeatedly gets it wrong and hence materially misleads its audiences on the topic.

“Under what is known as a “family reunification” rule, Palestinians elsewhere can apply for the right to live with a husband or wife in East Jerusalem once they are married.

That is the right that Israel said it was revoking in the case of Nadia Abu Jamal, who is believed to have been married to Ghassan Abu Jamal.”

The legislation referred to here is the Citizenship and Entry into Israel Law which is classed as a temporary provision and, contrary to the impression given by the BBC, does not apply exclusively to Palestinian spouses of Arab residents of Jerusalem but means that the spouses of Israeli citizens or permanent residents who come from countries or territories in a state of war with Israel are not automatically entitled to residency in Israel as a result of marriage, but must apply for that status.

“The Citizenship and Entry into Israel Law, which is worded as a temporary order, concerns reunification among families whose entry into Israel represents a security risk in the eyes of the security services. This includes Palestinian residents of the West Bank and Gaza, and foreign nationals from enemy countries or from regions involved in an ongoing conflict with the State of Israel.”

It is of course worth remembering that many countries – including the UK – do not grant automatic citizenship to spouses on the basis of ‘family reunification’.

Whilst this BBC article amplifies second-hand comment from the political NGO B’Tselem, the quoted statement from the Israeli Minister of the Interior appears to have come from Facebook and if the BBC did contact the Israeli government for comment, that is not evident in the report.