The BBC’s coverage of the terror attack in the Jerusalem neighbourhood of Har Nof on November 18th provides us with an opportunity to take a closer look at how the corporation framed this story across a variety of platforms.

Below is a sample of BBC coverage: obviously it does not include all of the content broadcast across the range of BBC platforms on the two days upon which the story was run.

Profile: Popular Front for the Liberation of Palestine (PFLP)  (both above are discussed here)

Synagogue attack: Netanyahu vow in ‘battle for Jerusalem’ (all of the above are discussed here)

Israel: ‘No justification for this wanton violence’  Mark Regev

John Kerry on Jerusalem attack: ‘An act of pure terror’

One outstanding – although predictable – feature of the BBC’s coverage is that despite the fact that the core story was about a terror attack perpetrated on the congregation of a synagogue, in all of the above reports the word terror and its derivatives were never used directly by the BBC. References to terrorism came only in the form of quotes from Israeli officials (placed in inverted commas by the BBC), from Israeli interviewees or from the US Secretary of State in the filmed report of his statement to the press.

Another remarkable fact is that in seven of the above reports and despite the existence of a pathologist’s report, the BBC nevertheless amplified or allowed the amplification of baseless Palestinian claims that a bus driver who committed suicide the day before the terror attack took place had been murdered by Israelis and presented that as a background factor for the attack.

On the day of the attack itself the BBC saw fit to broadcast interviews with Palestinian officials from several factions – Ghazi Hamad from Hamas, Mustafa Barghouti from the PNI and Hussam Zomlot from Fatah – all of whom were given free rein to promote falsehoods and propaganda, including claims of “attacks” on the Al Aqsa Mosque by Israelis.

The terror attack was presented across the board as being the result of “rising tensions” between Israelis and Palestinians and those tensions were attributed by the BBC to a variety of factors, with more than one usually proffered in each report and some factors emphasized multiple times in a particular item.

Two of the reports suggested that tensions could be explained by “discrimination” against Palestinian residents of Jerusalem and the issue of their right to Israeli citizenship was inaccurately represented. In three reports audiences were told that rising tensions were the result of “a cycle of violence” which, according to the BBC, began with the kidnappings and murders of three Israeli teenagers in June (not stated by the BBC as having been carried out by a Hamas cell) and the later murder of a Palestinian teenager from Shuafat. 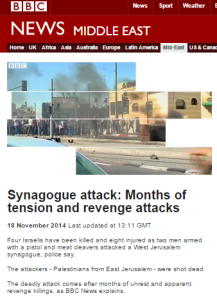 On five occasions tensions were attributed to the fact that no peace negotiations are currently underway and six reports cited the Palestinian death toll in the summer conflict between Israel and Hamas as a contributing factor but with no information provided to audiences with regard to Hamas’ instigation of that conflict or its strategies – such as the use of human shields – which contributed to the civilian death toll.

The campaign by some Israelis for equal rights of worship for non-Muslims on Temple Mount was cited on ten occasions as causing “tensions” but the BBC elected not to explore the topic of why that should be the case. On five occasions Temple Mount was described by the BBC as a “disputed site” and viewers of BBC television news were even told by Jeremy Bowen that Palestinians are “enraged” by “fears about the future of Aqsa Mosque”, with no attempt to put those “fears” in their correct and factual context.

But the factor most frequently promoted as a cause of “tensions” which purportedly led to the terror attack was what the BBC termed “settlements” or “settler homes”, with that factor being cited on eleven occasions and the district of Silwan once again being specifically named in two reports.

Clearly most of the factors presented were framed as Israeli actions. The overall impression received by audiences therefore was that the “tensions” which lead to Palestinian terror attacks against Israelis are Palestinian reaction to Israeli action.

Another interesting aspect of the BBC’s framing of this story relates to the issue of Palestinian incitement. That factor was mentioned directly in two reports (John Kerry’s statement to the press and the interview with Mark Regev), but not by BBC correspondents. In two additional reports the BBC quoted the Israeli prime minister on the issue of Palestinian incitement. Incitement coming directly from the president of the Palestinian Authority was downplayed and dismissed by Jeremy Bowen and Tim Franks. In the BBC Radio 4 programme ‘PM’ listeners heard Yolande Knell paraphrase a supposed Palestinian claim that “Israel is also inciting the violence”.

As has been noted here on numerous occasions, BBC audiences have not been informed at all about incitement and glorification of terrorism on the part of PA and Fatah officials (see recent examples here, here and here) and official Palestinian Authority media and institutions (see recent examples here, here, here, here and here). The sole reference to the issue of incitement to appear on the BBC News website in recent months has been an article by BBC Trending titled “The Palestinians calling for the ‘car uprising’” which appeared on November 13th and related to a social media campaign rather than to incitement from official PA sources.

So, whilst BBC audiences were repeatedly told that the “rising tensions” which supposedly led to the terror attack in Har Nof can be attributed to a variety of factors which are mostly – according to the BBC’s portrayal – attributable to Israeli actions, they remained completely ignorant on the issue of the crucial factor of the atmosphere being engineered by the Palestinian Authority and its main party Fatah – also headed by Mahmoud Abbas.

That glaring and continuing omission in BBC coverage can only be attributed to a politically motivated narrative being allowed to trump the corporation’s public purpose remit.