Readers may recall that on January 14th the BBC News website published a Q&A feature concerning the Palestinian Authority’s bid to join the International Criminal Court. As was noted here at the time: 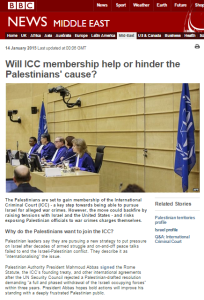 “Under the sub-heading “When will they become ICC members and what does it mean?” the article states:

“The Palestinians have asked it to exercise jurisdiction over any crimes committed in the occupied territories of East Jerusalem, the West Bank and Gaza from 13 June 2014. This covers events prior to and during last summer’s conflict between Israel and militants in Gaza.”

That, of course, is correct but notably the BBC refrains from pointing out to audiences that – as is also the case with the UN HRC’s Schabas commission – the ‘start date’ selected by the PA deliberately excludes the kidnappings and murders of three Israeli teenagers by a Hebron-based Hamas cell on June 12th 2014.”

A member of the public who took note of the same point submitted a complaint to the BBC and recently received a response which includes the following:

“We have reviewed the article in question and agree the date chosen by the Palestinians as the starting point for the ICC to investigate requires explanation as it is clearly not arbitrary. We have therefore updated the article with the following lines, which we hope you will find satisfactory: […]”

Although no footnote has been added to the article to inform audiences that it has been amended, the relevant passage now reads:

The wording of that amendment still does not adequately clarify the point that the ‘start date’ selected by the PA for the investigation it wants the ICC to pursue deliberately excludes the kidnappings and murders of Naftali Frenkel, Gil-ad Sha’ar and Eyal Yifrach – or why.

Additionally, the statement “Israeli forces began a mass round-up of Palestinians” misleadingly suggests that people were arrested randomly simply because they were Palestinians and does not make it clear that arrests were based on intelligence linking those arrested to the suspects and/or to terrorist organisations. As Ynet reported at the later stages of the search operation:

“Since the beginning of Operation Brother’s Keepers, a total of 419 Palestinians have been arrested, among them 59 were released in the Shalit deal, and 279 are Hamas operatives. The IDF has searched 2,200 sites.”

As the BBC’s reply to this complaint shows, it is fully aware of the fact that the Palestinian request for an investigation of events after June 13th 2014 is “clearly not arbitrary” and of the significance of that selected ‘start date’. And yet, despite acknowledgement that the issue “requires explanation”, the wording of this amendment still does not sufficiently clarify a point vital to audience understanding of the political motives behind the Palestinian ICC bid.