Consumers of BBC content on February 26th could not have failed to notice the story promoted as ‘exclusive’ (but also published on the same day by the Washington Post) in which the identity of the ISIS terrorist nicknamed ‘Jihadi John’ was revealed. 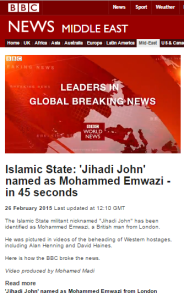 Among the plethora of reports appearing across all BBC platforms were several which included comment from the organization ‘Cage’ and its representative Asim Qureshi. As readers may recall, we have previously noted here that Qureshi’s appearances on the BBC have been remarkable for the fact that introductions and descriptions of the organization he represents have breached editorial guidelines by failing to comply with the clause which commits the BBC to “clearly summarising the standpoint of any interviewee where it is relevant”.

So did the BBC make efforts to rectify that problem in its latest batch of reports?

“In a news conference, Asim Qureshi, the research director of the London-based lobby group Cage, which had been in contact with Emwazi over a number of years, explained how he had been approached by the Washington Post for the story and detailed the difficulties Emwazi had had with security services in the UK and overseas.”

The report goes on to state:

“Mr Qureshi said Emwazi, who is understood to be about 27, had been “extremely kind, gentle and soft-spoken, the most humble young person I knew”.”

“He [Qureshi] said he did not know what had happened to Emwazi, adding: “When we treat people as if they are outsiders they will inevitably feel like outsiders – our entire national security strategy for the last 13 years has only increased alienation. A narrative of injustice has taken root.” “

An additional report also published on the BBC news website on the same day under the title “Islamic State: Profile of Mohammed Emwazi aka ‘Jihadi John’” described ‘Cage’ as follows: [emphasis added]

“They were interrogated and Emwazi later claimed to Cage, a campaign group in London, that they had been subject to harassment and abuse.”

“British advocacy group Cage has disclosed an exchange of emails it says it has had with Mohammed Emwazi, the Islamic State militant known as “Jihadi John”.

Cage campaigns against “state policies developed as part of the War on Terror” and says Emwazi first contacted it in 2009 to complain about being interrogated by a British official at Schipol Airport after trying to visit Tanzania.”

A filmed report appearing on the BBC News website (as well as on BBC television news) under the title “IS ‘Jihadi John’ suspect ‘a beautiful young man’ – Cage” states in its synopsis:

“The man who has been named as Islamic State militant “Jihadi John” was a “beautiful young man” according to Asim Qureshi, the research director of the London-based campaign group Cage.” [emphasis added]

As we see, despite its extensive promotion of ‘Cage’ and amplification of the bizarre statements from Asim Qureshi, the BBC once again failed its audiences by neglecting to enable them to put that organization and the allegations of its representative into their correct context by means of clarification – as demanded in its own editorial guidelines – of the “particular viewpoint” they represent.