One of the articles appearing in the ‘Features & Analysis’ section of the BBC News website’s Middle East page on March 11th was promoted using the following assertion: 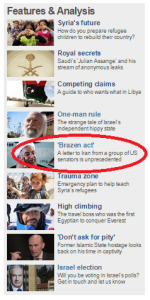 The article itself – titled “With their letter to Iran, US senators show ‘chutzpah’” – made repeated use of the same claim. [all emphasis added]

“Some call it bold. Others call it insipid. One thing is true: a letter that Republicans wrote to Iran’s leaders is unprecedented.”

“The letter is unusual. It may even be, as American University’s Stephen Vladeck, a professor of law, says, “unprecedented in the annals of American history”.”

“Members of Congress frequently weigh in on US policy. That’s part of their job. But reaching out to foreign leaders in this manner breaks ground.”

“Aside from unprecedented, the letter is unpopular.”

Clearly the writer of this article intended BBC audiences to go away with the impression that never before had members of the US Congress intervened on foreign policy issues without the approval of the White House – but is that actually true?

Marc Thiessen, writing in the Washington Post, doesn’t think so. Here is just one of the examples he cites as showing that the letter “is far from unprecedented”:

“In June 2000 […] President Bill Clinton set off for Moscow to negotiate a new arms control treaty with Vladimir Putin that would have limited the United States’ ability to build defenses against ballistic missile attack. The morning the talks were scheduled to begin, the president was greeted by on op-ed on the front page of Izvestia by committee chairman Jesse Helms (R-N.C.). “After dragging his feet on missile defense for nearly eight years, Mr. Clinton now fervently hopes that he will be permitted, in his final months in office, to tie the hands of the next President,” Helms wrote. “Well I, for one, have a message for the President: Not on my watch. Let’s be clear, to avoid any misunderstandings: Any modified ABM treaty negotiated by this administration will be dead-on-arrival at the Senate Foreign Relations Committee. . . . The Russian government should not be under any illusion whatsoever that any commitments made by this lame-duck Administration, will be binding on the next administration.””

Writing in Politico, journalist Michael Crowley presents additional examples, including that of Nancy Pelosi – whose take on the Israeli prime minister’s recent speech to the US Congress was extensively promoted by the BBC.

“Experts say the Senate GOP’s Iran letter may be an unprecedented breach of foreign policy protocol both in its form and its boldness. But national security has long been a fierce battleground between Congress and the White House — and both parties have accused the other of sabotaging foreign policy goals.

Recall the bilious battles over the Iraq War, particularly after Democrats captured Congress in 2006 with promises to force Bush to withdraw troops from Iraq. As Democrats sought to force withdrawal timelines on the White House, some conservatives sarcastically referred to then-House Speaker Nancy Pelosi as “General Pelosi.”

Pelosi and Bush also butted heads in the spring of 2007 on Syria policy. Against the White House’s wishes, the House Democratic leader traveled to Damascus to meet with Syrian leader Bashar al-Assad. (Pelosi hoped that Assad could be moderated through engagement; Bush was intent on isolating the Syrian dictator.) “The president is the one who conducts foreign policy, not the speaker of the House,” then- Vice President Dick Cheney groused to Rush Limbaugh.

Some conservatives even asked whether Pelosi might be prosecutable under the Logan Act, which prohibits unauthorized citizens from negotiating with foreign governments. This week, the shoe was on the other foot, with some Democrats asking whether the Republicans who signed the letter may have violated the Logan Act.”

Whatever one’s view of the letter itself and its implications, it is clear that the writer of this BBC article sought to frame the story in a very particular light. And unfortunately, this is not the first time that audiences have seen Tara McKelvey employ the selective use of available information in order to promote a certain political view of a story.