On April 27th the BBC News website produced an article titled “Israel struck Gaza shelters – UN report” which appeared on its Middle East page. The main photograph appearing at the head of that report is captioned:

The BBC’s article does not include a link to the summary of the UN report which is its subject matter but had it done so, audiences would have been able to see for themselves that the BBC’s knee-jerk insertion of the words “Israel said” is entirely superfluous given that the UN’s report establishes the exact same fact. The BBC itself even goes on to state that: 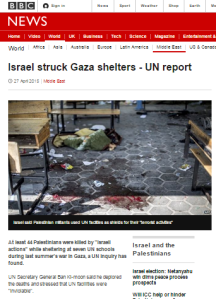 “The inquiry also found that three empty UN schools were used by Palestinian militants to store weapons, and that in two cases they likely fired from them.”

The BBC’s article can be divided into several parts, one of which is general background information. Readers are informed that:

At least 2,189 were Palestinians, including more than 1,486 civilians, according to the UN. On the Israeli side, 67 soldiers were killed along with six civilians.”

BBC audiences have seen that oddly worded description before and, as was noted here at the time:

Since the BBC began using that terminology back in December 2014, further information has come to light concerning the ratio of civilian to combatant casualties but the BBC continues to ignore those findings, instead continuing to quote the UN figures which were problematic from the onset and with nothing to suggest that the BBC has carried out any sort of independent verification of the information it promotes.

An additional part of the BBC’s article relates to the abuse of UN facilities by terrorist organisations but notably no information is provided to audiences concerning the investigators’ conclusions as to why and how that abuse came about.

“He [the UN Secretary General] also expressed dismay that Palestinian militant groups would put UN schools at risk by using them to hide arms.

The report found that weapons were stored at three schools, although they were not being used as shelters at the time. The inquiry found that Palestinian militants had probably fired from two schools, which Mr Ban said was “unacceptable”.

“United Nations premises are inviolable and should be places of safety, particularly in a situation of armed conflict,” he warned. “I will work with all concerned and spare no effort to ensure that such incidents will never be repeated.””

A third part of the article gives the BBC’s version of the section of the report which relates to Israeli actions and remarkably all the important background information and context included in the report summary (such as the location of certain sites within the buffer zone and prior warnings to evacuate some facilities) is removed from audience view.

“At least 44 Palestinians were killed by “Israeli actions” while sheltering at seven UN schools during last summer’s war in Gaza, a UN inquiry has found.

At a fourth girls’ school, the inquiry found, “no prior warning had been given by the government of Israel of the firing of 155mm high explosive projectiles on, or in the surrounding area of the school”.

“It is a matter of the utmost gravity that those who looked to them for protection and who sought and were granted shelter there had their hopes and trust denied,” Mr Ban wrote in a cover letter accompanying the summary.” [emphasis added]

The report summary deals with ten separate cases, three of which relate to the storage of weapons by terrorist groups in UN schools. Of the remaining seven cases, one relates to a boys’ school and two to co-educational facilities, meaning that the remaining four incidents at girls’ schools – the four the BBC chose to highlight – are, according to the classification used in UN’s report, Incidents a, b, d and e.

As readers can see for themselves in the summary, in none of the descriptions of incidents which took place at girls’ schools (or any others) does the UN investigating body state that a “school was hit by 88 mortar rounds fired by the Israeli military”.

The possible source of that obviously grossly inaccurate BBC representation of the report’s content may perhaps be found in the part of the summary relating to ‘Incident a’ at the UNRWA Maghazi Preparatory Girls “A/B” School (pages 5 & 6). The summary states:

“Later in the day of 21 July, UNRWA removed the school from its list of designated emergency shelters. In the morning of 22 July 2014, UNRWA and the IDF coordinated a two-hour window to allow safe passage for an UNRWA team to visit the school and investigate the previous day’s incident. The team arrived at the school during that window. They were in clearly marked United Nations vehicles and parked in full view in the middle of the school courtyard. One of the team, wearing a vest with a luminescent United Nations sign, went to the roof to examine the previous day’s strike. While there, two mortar rounds hit buildings in close proximity to the school. The team member ran from the roof. Two further mortar rounds then struck the roof of the school at the exact location where he had been standing. The UNRWA team immediately evacuated the area. No injuries resulted from this incident, but the school was damaged.”

In other words, four mortar rounds in all hit the school – after it had been removed from the list of shelters. The summary goes on:

“The Government of Israel informed the Board that, as a result of the examination that had been initiated at the request of the MAG [Military Attorney General], it had been found that, on 22 July, the IDF was engaged in mortar fire in the area of Maghazi, but that all fire was directed at open areas at least two kilometres away. Moreover, IDF munitions experts who had examined photographs of a fragment of a mortar round that had been collected by UNRWA at the scene of the incident had been unable to determine whether it was a remnant of an IDF 81 MM mortar round, as opposed, for example, to an 82 MM round, which, it was said, were in use by Hamas. Such determination would require physical examination of the remnant. The Board, however, found that the school had been hit by 81 MM mortar rounds fired by the IDF.”

“81 MM” of course relates to the caliber of the mortar round – not the number fired.

Apparently whichever member of the BBC’s staff read the UN’s summary and then wrote up this article did not understand what he or she was reading. Clearly a prominent correction needs to be made to this article.

A particularly interesting part of the UN report (pages 19 & 20) reads as follows:

“The Board found that, at times, there had been multiple channels of communication, both within the United Nations and with outside interlocutors. While this could be helpful, it could also lead to misunderstandings. The Board also found that the existence of two United Nations operations emergency rooms, one organized and coordinated by OCHA and the other by UNRWA, could lead to confusion, even though they carried out distinct functions, which were clear to United Nations actors on the ground. […]

While they were channelled [sic] by the United Nations to the IDF in a timely manner, the Board sensed a degree of confusion concerning the names and coordinates of installations, as, on occasion, the IDF and the United Nations used different mapping references and some schools have multiple names. The Board welcomed the intention of UNRWA and Israel’s Coordination and Liaison Administration (CLA) to refer to installations in the future by numbers, as opposed to names.”

Seeing as at the time the BBC provided a very generous amount of air-time and column space (see just a few examples here, here and here) for UNRWA officials to insist that the names and coordinates of buildings had been passed on to the IDF and to infer malice on Israel’s part, audiences should obviously have been informed that the UN investigation found that the system was by no means foolproof.