With both those shows being specialist programmes, listeners may have expected to receive some factual information about the relevant background factors affecting what Keyworth’s report of May 19th billed “Gaza’s Broken Economy“.

The ‘Business Daily’ version of Keyworth’s report was introduced by presenter Manuela Saragosa as follows:

“After the conflict with Israel in the middle of last year international donors pledged three and a half billion dollars to fund the reconstruction of Gaza’s economy. But last month a group of 46 international aid agencies warned that reconstruction and recovery have barely begun. Much of the aid money has yet to come through. So how do ordinary Gazans survive? What economy is there to speak of?”

This of course is far from the first time that the BBC has reported on the failure of donors to come up with the contributions pledged at the Cairo donor conference last October but once again we see that no serious exploration of the background to that story takes place and audiences hence lack the information they need in order to be able to understand the contribution of Hamas-PA infighting to the present situation.

Whilst Marie Keyworth’s report (also aired on ‘Business Matters’) is high on emotion and pathos, again listeners were not provided with the objective facts and background information necessary for proper understanding of the anecdotes they heard. 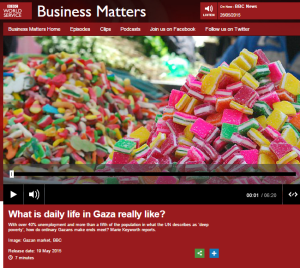 Thus, when Keyworth interviewed the son of a blacksmith who once used to make a much better living working in Israel, listeners heard the following context-free explanation:

“He has been working in Israel like for 25 years and then intifada number two happened – 2000 – he, all of them, stopped going to Israel so he was stuck in Gaza doing whatever he could do.”

The second Intifada did not just ‘happen’ of course; it was planned, initiated and executed by representatives and leaders of the same Palestinians who, as a result of that terror war, lost the ability to support their families by means of higher paying work in Israel.

A similar lack of context was evident when the owner of a mini-market was heard telling Keyworth that:

No effort was made by Kenworth to inform listeners that Egypt’s closure of the smuggling tunnels in the Rafah region was prompted by the use of those same tunnels for the purpose of terrorism. Likewise, audiences were not told that there are no limitations on the import of foodstuffs via the Kerem Shalom crossing or that the crossing is open most of the time (excepting weekends, holidays and occasionally due to security incidents) meaning that promotion of the notion that imports can only enter Gaza “when they are open” fosters a misleading impression.

Listeners heard a similarly context-free and misleading statement concerning “borders” in a segment of the programme recorded in a market.

MK: “So these tomatoes have been grown in Gaza?”

Interviewee: “Yeah, yeah, but the borders are closed – we can’t export them – so they give them back to the market and that’s that makes it a little cheaper for us.”

In contrast to the inaccurate impression given to listeners, agricultural produce is of course exported from the Gaza Strip. In addition to the existing exports to Europe and elsewhere, farmers in Gaza also now send produce to PA controlled areas and Israel.

So if a reduction in the price of tomatoes in the markets of Gaza is not because “the borders are closed”, what did bring it about?

In April 2015 – a month before this BBC report was made – the Palestinian Ministry of Agriculture in Gaza announced that it was temporarily stopping the export of tomatoes from the Gaza Strip due to their high price there.

“The Ministry told the agency Anatolia news that “as soon as market supply increases and prices stabilise, exports will be resumed.”

Clearly the Palestinian Ministry of Agriculture does not believe that “the borders are closed” to exports and it is obvious that no fact-checking was carried out by the BBC before this report was broadcast and hence listeners were materially misled.

BBC audiences have heard variations of these emotive descriptions of the Gaza economy on assorted BBC platforms on countless occasions in the past. It is however particularly disappointing to see the BBC’s business department producing the same kind of inaccurate and context-free repetition of that standard theme. Any report really aimed at informing audiences about the facts behind the story could not pass up on objective presentation and meaningful analysis of the contribution of Hamas’ terrorism to the real causes of the economic situation in the Gaza Strip.