“Palestinian Authority forces arrested 108 Hamas members in the West Bank in one of the biggest raids in years.

According to reports in Hamas-affiliated media, the raids began early Thursday morning and continued overnight Thursday-Friday. The arrests included senior Hamas officials, according to the reports.

The raids were conducted in Hebron, Nablus and Bethlehem, Walla News reported.”

““They were planning to set up an infrastructure designed to strengthen Hamas in the West Bank, which would then operate against Israel and create security chaos,” a senior [PA] official said.”

According to Al Jazeera:

“Adnan al-Damiri, the PA security services’ spokesman, said the arrests were not related to political activities but were made for security reasons.

“We will not allow that the West Bank disintegrates into carnage and wars just because Hamas wants escalation,” he told Al Jazeera.”

Analyst Avi Issacharoff adds some relevant context in this article:

“A recent spate of terror attacks in the West Bank, as well as revelations by the Shin Bet security service concerning Hamas infrastructure in Nablus, prompted an awakening of sorts on the Palestinian side, especially at the office of PA President Mahmoud Abbas. Abbas, who has proven time and again that he won’t abide any challenge to the stability of his rule, realizes full well that murdering Jews is only the secondary goal of Hamas activists carrying out attacks. The main aim of its deadly operations is to weaken the Palestinian Authority, heighten tensions with Israel, and ultimately undermine the government in the West Bank. […]

None of this means Hamas will admit defeat or relinquish its efforts to challenge the PA’s rule. While the organization is doing its best to maintain a state of relative calm in the Gaza Strip, it will most likely continue to send operatives from Turkey and the Strip to the West Bank to plan more terrorist attacks in hope of undermining the PA.”

As readers are aware, BBC audiences have been consistently deprived of information concerning Hamas’ foreign based operatives’ attempts to strengthen its presence in PA controlled areas – including the latest plot. Likewise, BBC reporting on the recent uptick in terror attacks against Israelis has been virtually non-existent – at least in English.

So did the news of the arrests carried out by the PA prompt the BBC to try to fill in some of the story’s pieces which have until now been missing for its audiences?

Listeners to the July 3rd edition of the BBC World Service radio programme ‘Newshour’ heard (from 14:02 here) the following introduction to an item on the topic from presenter Owen Bennett-Jones. 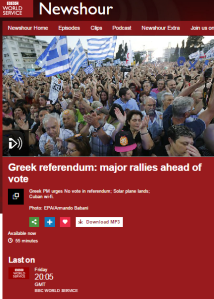 “Palestinian Authority forces have arrested more than a hundred members of the Hamas militant network in the Israeli occupied West Bank.”

Actually, as noted above, the arrests took place in areas under the full control of the Palestinian Authority. Bennett-Jones continued:

In fact the one year-old Palestinian Unity Government was unilaterally dissolved by Abbas.

Bennett-Jones then introduced his interviewee Ghassan Khatib, asking “how deep are these divisions between Hamas and the Palestinian Authority?”. Readers may recall that Khatib was also interviewed by the BBC World Service just a couple of weeks earlier and that his account of the dissolution of the Palestinian Unity Government at the time focused in no small part on the promotion of anti-Israel falsehoods and propaganda irrelevant to the subject matter.

Khatib’s explanation of the arrests of scores of Hamas operatives by the PA was as follows:

“The arrests that has been reported in the West Bank is an expected outcome of the deterioration in the relation between the Palestinian Authority in the West Bank and Hamas in Gaza. There has been two main reasons for this deterioration that led to those arrests. The first one is news about direct and indirect contacts between Israel and Hamas regarding a separate future of Gaza from the West Bank. The second is the difficulties Hamas created for the Palestinian government that was agreed upon with Hamas earlier and Hamas preventing this government from functioning in Gaza Strip. These two things led into gradual deterioration in the relation of the two sides and usually, when relations are deteriorating, one of the typical outcomes is that PA would start arresting Hamas activists in the West Bank and Hamas would start arresting Fatah activists in Gaza strip.”

Bennett-Jones turned the item’s focus away from its supposed subject matter:

“So just tell us a bit more about the contacts with Israel. How serious is the suggestion of basically splitting Gaza from the West Bank and how great is Hamas’ willingness to consider that?”

As Khatib then admitted, his speculations concerning “contacts between Israel and Hamas” are based on “leaks” and indeed the sources of that story have been mostly Arab media outlets and Fatah officials. Even if such contacts are going on, the likely agenda is a ‘hudna‘ – or long-term truce – rather than an intention to ‘split’ the Gaza Strip and the PA controlled territories.

Bennett-Jones’ final question to Khatib related to the “prospect of a stable political arrangement for the Palestinians when they have one united leadership” and he failed to question his interviewee on the obviously relevant topic of Hamas’ aspiration to undermine the Palestinian Authority. Likewise, no attempt was made to adequately inform listeners of Hamas’ practical efforts to strengthen its presence in PA controlled areas or of the context of the recent rise in terror attacks.

As a result, BBC audiences remained yet again in the dark with regard to the threat presented by Hamas to PA rule, the likelihood of destabilization in areas currently controlled by the PA and the real background to this latest spate of arrests.