In March 2015 BBC reporting on terror attacks against Israelis amounted to coverage of one incident which took place on March 6th in Jerusalem.

A filmed report by David Eades, which was shown on BBC television news programmes and promoted on the BBC News website, did not mention the word terror at all. As was noted here at the time, the written report appearing on the BBC News website mentioned the word terror twice – both times using punctuation intended to clarify to readers that the terminology was not endorsed by the BBC. 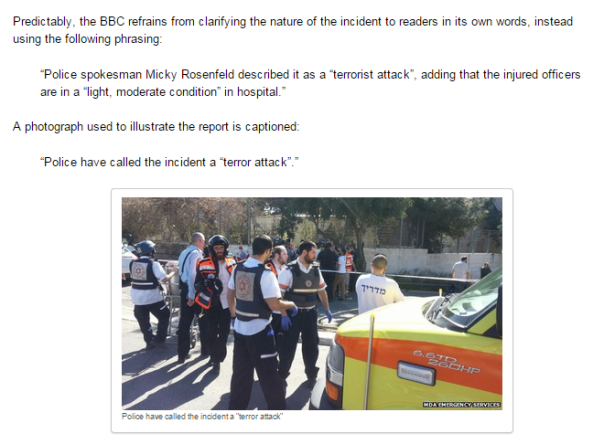 The perpetrator of that attack – Mohammad Salima from Ras al Amud – confessed to five counts of attempted murder and has now been sentenced to 25 years in prison.

“On March 6, Salaimeh drove his vehicle into the group – lightly-to-moderately wounding all five – before being shot twice upon exiting the car while wielding a large meat cleaver in an attempt to attack more victims. […]

After being treated at an area hospital, Salaimeh, who resides in the Arab neighborhood of Ras el-Amud, confessed that the attack was premeditated, and that he intended to kill as many Jews as possible.

Following the attack, Hamas’s spokesman Sami Abu Zuhri posted a statement on his Facebook page lauding the terrorist, but did not claim responsibility.” [emphasis added]

That, of course, is the same frequently quoted and promoted Sami Abu Zuhri upon whom the BBC recently called to provide comment on a report into last summer’s conflict between Israel and the terror group he represents – and then defended that action.

So – a terrorist has confessed to trying to commit the premeditated murder of five people simply because they were Jews and yet the BBC content relating to that incident which is still available on the internet (and hence still potentially the subject of editorial complaints) does not clarify the nature of that incident to audiences.