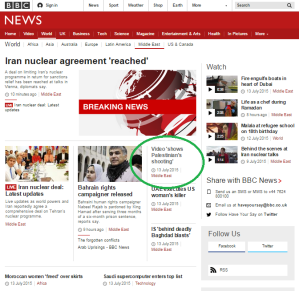 The link leads to a July 13th article similarly titled “Video ‘shows Israeli officer shoot fleeing Palestinian’” which relates to an incident which took place on July 3rd and was not reported by the BBC at the time except for a brief mention in an unrelated article.

However, despite those two very clear headline statements, the video in question in fact does not show the shooting of a Palestinian – but only those who bothered to read down to the article’s sixteenth paragraph (out of 22) would discover that.

“On Monday, B’Tselem released video footage recorded by a security camera at the petrol station showing the moments before the shooting.

It shows a person believed to be Kasbeh running at the Israeli army vehicle as it passes by and throwing a stone. He then runs away as the car then brakes suddenly and at least two soldiers get out, brandishing weapons.” [emphasis added]

The BBC’s article links to and promotes sections from a report by the Guardian’s Peter Beaumont on the same subject. As our colleague Adam Levick of UK Media Watch noted in a post concerning that report :

“As you can see, the video shows Kasbah hurling rocks at the soldiers’ vehicle, the soldiers giving chase and aiming their weapons, and then the seconds before the Palestinian was actually shot.  The soldiers then can be seen returning to their vehicle. We don’t see Shomer firing his weapon, or what Kasbah was doing as he was shot.

Indeed, Beaumont, in one passage, acknowledges this fact:

‘The footage – acquired by the Israeli human rights group B’Tselem – was recorded by a security camera on a nearby petrol station and, although it does not show the moment of the lethal shooting itself, shows the preceding seconds.'”

Clearly those two BBC headlines are inaccurate and misleading.

Obviously this report is primarily based on – and provides further amplification for – a video and a press release produced by the NGO B’Tselem. In addition, readers are also directed to the B’Tselem website and to its Youtube channel via two separate links. However, the only explanation readers are given regarding B’Tselem comes in the article’s introductory paragraph:

“An Israeli human rights group has published a video it says contradicts the account of an Israeli army officer who shot dead a Palestinian teenager.” [emphasis added]

All additional references to the NGO only mention its name and no information whatsoever is provided to readers regarding the organisation’s political agenda and funding.

As readers are no doubt aware, the BBC’s Editorial Guidelines on impartiality state that:

B’Tselem is – as has been noted here in the past – one of the NGOs most frequently promoted and quoted in Israel-related BBC content. Despite that fact, the BBC has yet to provide its audiences with the relevant information concerning that organisation’s background which will enable them to put its extensive ‘contributions’ into perspective and context.