On August 18th an article appeared on both the Europe and Middle East pages of the BBC News website under the billing “Spanish festival drops Jewish singer”.

The article’s headline claims “Jewish groups protest as Spain festival drops US singer” and towards its end readers learn that: 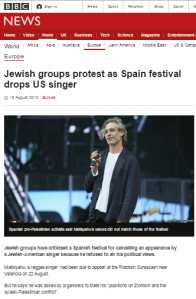 “Ronald Lauder, president of the World Jewish Congress, criticised the decision and urged Spanish authorities “to take appropriate action against those responsible for it”.

The Spanish Federation of Jewish Communities said the move was “cowardly, unfair and discriminatory”.”

In other words, the impression given to BBC audiences is that only Jewish groups are concerned about the organisers’ cancellation of a scheduled appearance by the American Jewish artist Matisyahu at the Rototom Sunsplash festival.

That, however, is not the case. The Spanish Foreign Ministry – obviously not a “Jewish group” – has made its position very clear.

“Spain said it rejected boycott campaigns and any sign of anti-Semitism, while reiterating its support for an independent Palestinian state through bilateral negotiations.

“Imposing a public declaration (from Matisyahu), puts into question the principle of non-discrimination on which all plural and diverse societies are based,” the Spanish foreign ministry said in a statement on Tuesday.”

A robust editorial appeared in the Spanish newspaper El Pais under the headline “Unacceptable discrimination“.

“It is absolutely unacceptable that in the Spain of the 21st century, individuals and organizations can still demand that somebody explain themselves in ideological terms in order to be able to exercise their profession, and takes us back to the dark days when everybody was required to prove their religiosity and purity of blood.

Anti-Semitism and discrimination on the grounds of ideology cannot be tolerated and must be stood up to. Criticism of Israel’s policies and defense of the Palestinians cannot be used as cover for systematic persecution of those who hold different views, or because they are Jewish. Spain’s politicians need to speak out about this scandal that questions this country’s commitment to free speech and thought.”

The Wall Street Journal addressed the topic with similar candidness:

“This year Rototom Sunsplash disinvited Matthew Miller, a Jewish-American reggae star who performs under the name Matisyahu, because he wouldn’t publicly endorse a Palestinian state. The organizers said they cancelled Mr. Miller’s appearance after having “repeatedly sought dialogue in the face of the artist’s unavailability to give a clear statement against war and on the right of the Palestinian people to their own state.”

Many European cultural and intellectual elites still don’t see the connection between singling out the world’s sole Jewish state for opprobrium and the explosion of anti-Semitic sentiment on the Continent. Remember the Matisyahu affair the next time proponents of the anti-Israel boycott, divest and sanction movement insist their aim is to promote Palestinian rights, not anti-Jewish bigotry.”

So – in contrast to the inaccurate impression created by the BBC – it was by no means just “Jewish groups” who found this episode profoundly disturbing.

A further inaccuracy was seen in the link provided to readers in the following section of the report:

“A campaign to cancel Matisyahu’s appearance was launched by the Valencia branch of the Boycott, Divestment and Sanctions (BDS) campaign.”

Readers who followed that Spanish language link to El Mundo read that Matisyahu is an “Israeli artist”:

Obviously the BBC did not bother to fact-check that article (which has since been corrected) before it was offered to readers as a link.

Additional inaccuracies are found in the article’s tepid portrayal of the BDS campaign.

“The pro-Palestinian group calls for a boycott of Israeli goods until it complies with international law – Israel calls the campaign misleading and anti-Semitic.”

The BBC’s characterization (also seen in the caption to the main image illustrating the article) of the BDS campaign as “pro-Palestinian” rather than anti-Israel is clearly rendered all the more absurd in light of this story. The claim that the BDS campaign “calls for a boycott of Israeli goods…” is inaccurate: the campaign also includes the boycott of Israeli academics, artists, sports persons and more.

As ever, this article fails to clarify to BBC audiences that the practical outcome of that latter demand would be an end to Jewish self-determination.

In other words, this ostensible impartiality box ticking ‘explanation’ of the BDS campaign is once again nothing more than whitewashed amplification of its own PR with no meaningful clarification to audiences concerning the campaign’s real political agenda.

This developing story of the bullying of an American Jew because of his ethnicity should clearly have clarified to the BBC (which has hitherto failed to cover the issue of the BDS campaign accurately and impartially) what that campaign is really all about and prompted it to begin providing its audiences with objective information on that topic. Obviously that did not happen.

More BBC mainstreaming of the anti-Israel BDS campaign – part one