The August 18th edition of the BBC World Service radio programme ‘World Have Your Say’ included an item about “the Israeli columnist who’s decided it’s time to call Israel an ‘apartheid’ society”. We will be discussing that programme in a future article but in this one we will take a look at the related post on the ‘World Have Your Say’ Facebook account on the same day.

As a reminder – the BBC uses social media and discussion boards as part of its interpretation of the public purpose remit titled ‘Global Outlook’, according to which it will “[e]nable individuals to participate in the global debate on significant international issues”.

“BBC Trust: “The BBC should inform conversation and debate, providing forums where its international audiences can debate issues they find important.””

Obviously anticipating the type of offensive comments not infrequently seen when Israel-related topics appear on such BBC discussion boards (see examples in the related articles below), the first comment on that post was posted by WHYS itself:

Below are examples of some of the comments the WHYS moderators apparently did not consider “abusive or inappropriate” seeing as they were left standing on the thread. 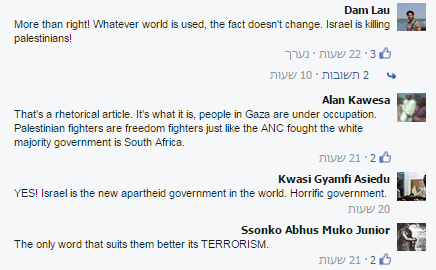 Promoting the elimination of Israel:

Once again we see that defamatory falsehoods, racial abuse and antisemitic tropes pass BBC ‘moderation’ with no problem at all. Perhaps the BBC would like to explain to its funding public how that can be considered as contributing to its mission of ‘informing conversation and debate’.

Antisemitism on BBC WS ‘World Have Your Say’ Facebook page